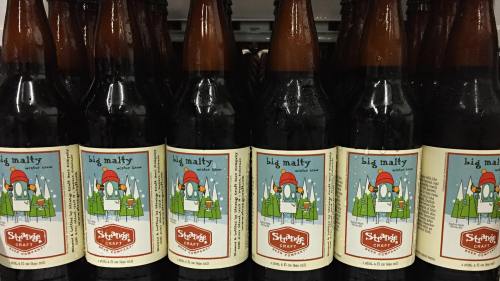 It’s that retrospective time of year when we reflect upon all of our experiences over the past 365 days and then rank them to see which ones were the best.

Whether it’s board games, albums, wardrobes, or to-do list software, without year-end lists we’d have to form our own opinions based on first-hand experience and miss the opportunity to remind ourselves of everything we lost out on over the past year.

So with that in mind, here are a few of my favorite Colorado beers of 2016…

And, now, events to get you through the Christmas week…

Ratio’s monthly quiz show pits teams of up to five people against a panel of “experts.” If a team of audience members win, the prizes are awesome. If the experts win, the prizes suck. Pretty simple. This month’s theme is Star Wars and they’ll be showing clips from everyone’s favorite space opera throughout the night.

Strange’s winter warmer, Big Malty, is back and clocks in at 7.8% ABV this year. The seven malt English Ale features honey from Colorado’s oldest honey company, Beyond the Hive, culminating in a malty, complex, big beer.

If you have not had a chance to sample Odyssey Beerwerks’ 11% ABV bourbon barrel-aged Russian Imperial Stout, Salyut, it will be available at Block & Larder. Aged in A.D. Laws’ bourbon barrels, the restaurant will also dust off a bottle of Laws’ 4 Grain Bourbon Batch #1 from their collection. The kitchen will also be offering Salyut-soaked figs. No ticket necessary but reservations are recommended.

Bring your no-longer-used winter gear to Diebolt as they help the Denver Rescue Mission ensure that everyone stays warm this holiday season. Diebolt will be tapping a limited amount of Figgy Noir (bourbon barrel-aged Biere de Garde) with cranberry and vanilla. There will be a photo booth on-site and a prize for the best/worst ugly sweater.

If you don;t want to show up empty-handed to grandma’s house, the #westside has got you covered. Swing by Westfax Brewing Company where they will be offering 40% off growler fills from 11am – 4pm or Seedstock Brewery where you can partake in a whopping 50% discount from 11am – 3pm.

It’s the Monday after Christmas and you probably have the day off. Double your buying power at Factotum where they’ll be offering buy-one-get-one deals on beer all night long.