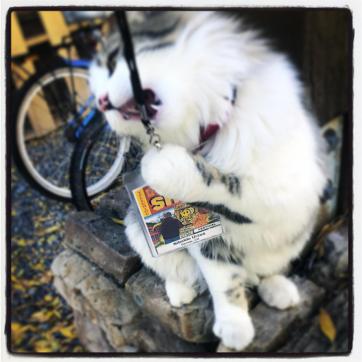 This dude totally tried to steal our festival badge.

We were two vegans on a plane full of hunters headed to Durango, Colorado. As the small, compact aircraft sailed low over the snow-capped mountains, I wondered if it would be easy to convince them not to eat us if we crashed, Alive-style, into one of the rugged peaks. I mean, they definitely had more meat on their bones than we did.

Yep, we hadn’t even made it to the film fest yet and already my paranoid fantasies had begun.

I have always dug scary movies, many of which I watched at an age when not everything made sense. And while I would never call myself a horror aficionado, I still enjoy a good scare. And because of that, my Chilean b-friend (Nibo) and I decided to attend our first-ever Telluride Horror Show, Colorado’s longest-running horror film festival, currently in its ninth year.

Our festival weekend began on Thursday morning on that flight from Denver to Durango. Who knew that you could even fly to Durango? We did not, but after plotting potential routes for our future road trip, I saw that Google also offered flight options. For just over $200 each, Nibo and I decided to save ourselves 10+ hours of travel time and a handful of driving-induced arguments. (You see, I like to point out everything I think Nibo will crash into while he’s driving and for some reason, he doesn’t like that. You would think that the solution would be for me to drive but I haven’t ever owned a car and have therefore regressed into a pretty mediocre driver. So, thank you United Airlines!)

I had never been to Durango before and I have to say that I fell in love. While it’s a gorgeously quaint town, it still retains a kind of salt-of-the-earth-type-of-vibe and the people were the nicest we’ve encountered in a while. After a day of walking, shopping, exploring, and tasting, we returned to our room at the Strater Hotel. Just as sleep was setting in, I vaguely remembered that the hotel was rumored to be haunted. Oh well, we had had a good day. 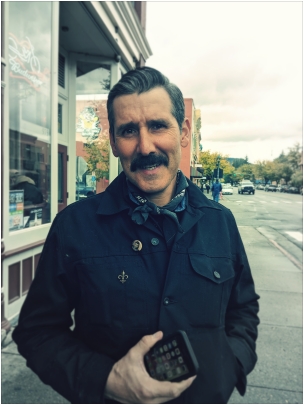 Nibo’s fresh cut from The Bookcase & Barber, a barbershop/speakeasy in downtown Durango.

On Friday, we rolled into Telluride on what seemed to be the very last day of fall. The two-hour drive up north was filled with jaw-dropping scenery and plans to sell everything and build a cabin in the woods.

Our fest officially began at the Sheridan Opera House, with a screening of Open 24 Hours. The theater was packed and the excitement was palpable – this was going to be fun. Open 24 Hours was exactly what I was hoping for from my festival experience. A well-acted, psychological slasher with a decent backstory and comedic bits interspersed throughout. My inner 12-year old was stoked.

The next film we caught was The Boat at the impressive Palm Theater, which is housed within Telluride High School (Oooo, we got to drink beer in a high school!) A movie about a killer boat? Yeah, that’s a tall order but it kinda worked? It was more stressful than scary but, in the end, it was a decent movie about a killer sea vessel. So, there you go.

Next, we saw Anna and the Apocalypse, a British high-school musical about a zombie apocalypse. (What will they think of next?!?) The movie was fun, funny, delightfully gory, and dare I say, touching? If any of that sounds remotely interesting to you, I would check this film out at the Denver Film Festival, which is happening in a couple of weeks.

Our first day of festing concluded with a screening of Terrified, an Argentinean film which had a darker, foreign, Poltergeist vibe to it. While it was touted as the scariest film in the fest, we both thought it was quite creepy but weren’t sure we would give it that title (however, we did triple-check our locks that night).

On Saturday we saw the “Horror, Ha Ha” Shorts Block, You Might Be the Killer, and The Dead Center, all of which we found entertaining but wouldn’t claim as our favorites of the fest. Feeling a bit of festival fatigue, we cut our experience off around dinnertime and enjoyed some mind-blowing ramen at Wood Ear – Whiskey Lounge & Noodle Bar, followed by a soak in the hot tub and some marveling at the sky. Stars…they’re just like us.

On Sunday, feeling like our eyes and our psyche needed a longer break, we headed to Orvis Hot Springs for another soak. It was our first time there and just what the doctor ordered. Mother Nature even played along, providing a light snowfall and lower temperatures than what we had previously experienced that weekend. It was relaxation at its finest. (And just in case you are curious about their “clothing-optional policy”, essentially, everyone our age and younger wore bathing suits while the older folks did not. The setting was so peaceful and pretty though, you barely even noticed the odd ding dong or shriveled up booty.)

Sunday concluded with two of our favorite films of the fest, Tigers Are Not Afraid and The Cleaning Lady. The female written and directed, Tigers Are Not Afraid, definitely had a Guillermo del Toro vibe to it, unfolding like a haunted fairy tale with brave children serving as its protagonists. It was sweet and sad, and it made me tear up for reasons I still don’t understand. Definitely put this movie in your figurative queue.

While we were debating seeing The Cleaning Lady (we were determined to get more ramen!) service was so swift at Wood Ear that we managed to score last-minute seats at the Sheridan to bookend our weekend at the fest. The crowd, many of which had come straight from trivia, was booze-filled and lively. And much to everyone’s delight, the movie was awesome! Spooky, well-written, and f*cked-up in all of the right ways. A perfect way to end our festival experience. (Plus, we can now joke about our cleaning lady doing such unspeakable acts – fun!)

Lots of festival goers chose to dress up, adding to the fun.

Films we did not see but have heard a lot of buzz about were The Dark, Lords of Chaos, The Witch in the Window, and Cam, which is also playing at this year’s film festival in Denver.

I’ll also note that we did not partake in any of the supplemental passholder activities, due to scheduling conflicts, veganism, and/or sheer tiredness, but thought it was neat that they were offered.

In closing, I will say that yes, this festival is definitely worth the price of admission (which in our case was $150 each for a three-day pass). It was so nostalgic and fun to watch a bunch of scary movies on the big screen, along with a crowd full of fun-loving individuals. And Telluride not only provided the perfect backdrop for the spooky fall weekend, but it also offered its own charms whenever we needed a break from all of the movie watching.

The festival has already announced dates for next year’s event (October 11- 13, 2019) and you know, it’s never too early to plan ahead. Follow them on Facebook for future announcements and chime in with your favorite experiences if you happened to be at the fest.

Thanks again to Telluride Horror Show for a really unique event, as well as a new collection of nightmares!