As you probably already know, I heart movies.  I would say that on average I see 5 – 8 movies in the theater each month, and several more online.  I became a member of the Denver Film Society a few years ago and because of the people, the programming, the special events, the bar (!), and my inherent love of film, it is surely one of my favorite places and nonprofits in town.  This week they’ll be kicking off the fourth annual Women + Film VOICES Film Festival from Tuesday, March 18 through Sunday, March 23, 2014.  This unique festival showcases a mix of documentaries, features, and short films all celebrating the best in women-centric programing.  The festival also includes salon discussions, a number of in-person guests, and receptions to further celebrate the thought-provoking, inspirational stories of women from around the world.  Tickets can be purchased individually for each film online, or you can go all-in for a festival pass.

And although I am guessing she may be in crazy, near-breakdown mode right about now, festival founder Tammy Brislin took the time to tell me about the history of this fest, which movies to catch, and why this festival is so important. 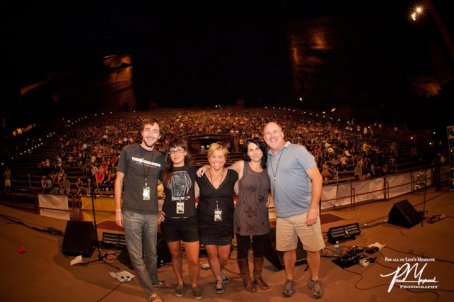 Occupation: Co-Founder and Producer of the Women+Film VOICES Film Festival

What do you like most about your job? All of the interesting people I get to meet, especially the filmmakers.  Making a film is such an achievement in my book.  I admire every single person who has taken on and accomplished such a herculean task.

A little about yourself: I was born and raised in Denver.  I couldn’t imagine living anywhere else.  My husband Mike and I spend as much time as possible outside.  But I can easily sit in a theatre all day watching movies too.  I love sipping good tequila and think it would be fun to be a tequila sommelier, if I wasn’t producing VOICES.

Favorite movie character ever: Oh there are so many, but who can resist Ruth Gordon as Maude, in Harold and Maude?

Favorite moment in cinema: Best moment ever is in the film, King of Hearts (1966).  Alan Bates’ character is a soldier that ends up hiding out in an insane asylum in a small French town.  The inmates declare him The King of Hearts, and he tries to lead them out of the asylum into the streets – I love the scene when they emerge from the asylum and frolic thru the streets of Marville.

Where did the idea for the VOICES Film Festival come from? I was at a conference for CARE (which is a humanitarian organization fighting global poverty, with a special focus on working alongside of poor women), and I saw a documentary on a women from Burundi, who stood up against the men in her village, took a class on starting a business, and ended up changing the course of her family’s life, and eventually the whole village.  It showed the extraordinary power of educating women and girls.  It brought home the fact that there are so many great stories out there about women working to bring about change in their communities, and how there are so few places to see/hear these stories.  I liked the idea of basing a festival around the theme of International Women’s Day, which is celebrated every year on March 8th.  I pitched the idea to the Denver Film Society and voilà, a festival was born.

Why is it important that this festival exists? It is an excellent platform to educate people about the issues women face around the globe.  Most of these films will have a limited theatrical release; VOICES Film Festival gives the audience a chance to see the films on a big screen as well as meet the filmmakers in person.  Nothing can replace seeing a film in a proper theatre!

Favorite moment of the VOICES Film Festival: Opening Night of the fest 4 years ago.  After the sold-out screening of Miss Representation, people hung out and TALKED about what they just saw, every inch of space was occupied.  Two girls sat at a high-top table, engrossed in conversation until closing time.  It was awesome!

Why should someone attend the VOICES Film Festival this year? We have 20 films, 2 salons, post-film discussions, receptions – all at the SIE FilmCenter.  No where else in Denver, can you get this type of programming.  Or hang-out with so many people who are passionate about the issues presented at the fest.

Most compelling film in the VOICES Film Festival: I would say Sepideh and Obvious Child.  Kind of the ying and the yang of the issues that young women are facing today as part of their everyday lives.

Sleeper film at the VOICES Film Festival that people may not see but should: Glena, Yellow Fever, Liar’s Dice, and Penny And Red: The Life Of Secretariat’s Owner.  (Sorry, it is against my nature to give only one film as an example!)

What are you looking forward to doing after the festival is over: Road trip to Ojo Caliente and Santa Fe.  Blue corn enchiladas and a marg at The Shed.

Any additional thoughts/plugs: The VOICES Salon Series happening on Saturday, March 22nd at RedLine and the SIE FilmCenter.