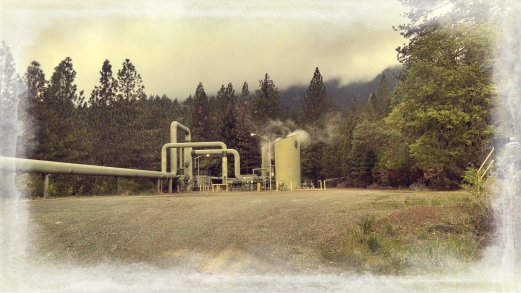 The Geysers, comprising 45 square miles along the Sonoma and Lake County border, is the largest complex of geothermal power plants in the world.

Greetings from beautiful Calistoga, CA!  I am here for my “real job”, shooting a video about geothermal energy.  The weather is cool, the scenery is beautiful, and I am digging the fog.  Am tacking on a weekend visit with my brother in San Francisco and although I just found out he has strep throat (!), I am still excited to see his new place and hang (perhaps while popping antibiotics).  So this weekend Denver, you are on your own.  Do.  It.  Up  Have a kegger, get wild, but just be sure everything is cleaned up by the time I get back.

Every fourth Friday of the month, the Denver Collaborative hosts a FREE community dinner supporting Denver’s local artists and creators.  This month, they will be offering up a baked potato bar along with some salads, beer, wine, and dessert.  Feel free to bring your favorite topping, as well as your latest work, idea, dream, epic fail, inspiration, and/or just yourself.  Take advantage of this FREE event to meet your fellow creators/collaborators, and share what you are up to these days.

Once again it’s on.  Throw on your freshest duds and join Collective Culture for an adult prom party.  Lipstick On Your Collar 2 is for the lover in you AND your inner dance machine.  Tickets are $5 in advance, $10 at the door.

Last Sunday’s Cinema is a monthly event that features two blockbuster movies shown in one of Denver’s hippest historic buildings.  Tickets are $7 per person or $15 per family (both movies included).  Beer, wine, candy, popcorn, sodas, and water are also available for purchase.  First movie begins at noon, doors open @ 11:15am.  This month’s theme is Oscar Winners.  The first movie will be Dallas Buyers Club starring Matthew McConaughey and Jared Leto, followed by Gravity starring Sandra Bullock and George Clooney.

FREE comedy show on the last Sunday of every month, featuring local and national talent in the coolest comedy club setting you’ve probably ever been to.  Pick-up a FREE Sexy Pizza slice card on your way out and end your night with some of the most delicious East Coast-style pizza in Denver.  This month’s comics to include Elliot Woolsey, Matt Ingebretson, Amber Tozer, Jordan Doll, and Jason Keyes.  Plus, enjoy FREE street parking on Sundays, yo!

Dear office rats working late in LoDo (does that even really happen in Denver?), come mellow out tonight on the 5th floor of The Colorado Building with some free live music and some artsy folks.  The Dikeou Collection’s fifth installment of the Fresh Jazz and Crisp Vinyl Series will feature a very special performance by the Trevor Anderies Group.  There will also be a DJ spinning rare & classic jazz records from the Collection’s extensive vinyl archive.  Anderies and his band will play at 8pm.  This event is FREE and open to the public; light refreshments will be provided and a cash bar will be available.

Monday, March 31, 2014 @ 9pm: Screening of Everybody Street at Buffalo Exchange

Mario Zoots & Buffalo Exchange Colorado present a private screening of Everybody Street.  Everybody Street, directed by Cheryl Dunn, illuminates the lives and work of New York’s iconic street photographers – including Bruce Davidson, Mary Ellen Mark, Elliott Erwitt, Ricky Powell and Jamel Shabazz – and the incomparable city that has inspired them for decades.  FREE.

Looking for a way to balance out your boozy, pill poppin’ lifestyle?  Every first Tuesday of the month, Root Down offers a gourmet 4-course raw vegan dinner for $39/person.  Please call ahead for reservations and mention you are coming for the Raw Food Menu, as seating is limited.

Enjoy classic horror flicks inside the bike-themed interior of Crash 45, along with movie-themed drink specials and fun souvenirs to take home!  All films start around 7:30pm, but come earlier for a seat and/or to order food.  This month’s film is Tales from the Darkside: The Movie (1990) – A child tells three stories of horror to keep from being eaten by a witch (played by Debbie Harry).

Mark Star Karaoke may just be the best karaoke in town.  Plus with $2 Olympia beer, $2 tequila, and free tacos from Mezcal starting at 10pm, how could you say no?  No cover; happens every Tuesday.

Come celebrate the four-anniversary of Chomp!  Chomp is yet another great event in town that makes me say, “I effing love this city”.  For just a $8 – $10 donation, enjoy a heaping plate of delicious vegan food, based on the chosen monthly theme.  This month’s theme?  Diner food!  Feel free to BYOB.  This monthly community vegan dinner is open to all.

The feature film Forks Over Knives examines the profound claim that most, if not all, of the degenerative diseases that afflict us can be controlled, or even reversed, by rejecting animal-based and processed foods.  Come on out to this community screening, which benefits Vegan Life Colorado.  Tickets run $9 – $12.