Denver.  As you probably already know, this weekend marks the first 4/20 since recreational use of marijuana became legal in our fair state.  There are a bunch of 4/20 events going on; most of them I don’t even understand (lots of weed lingo and things spelled weird).  However if you want to partake, there are several guides online such as this one to help you out. 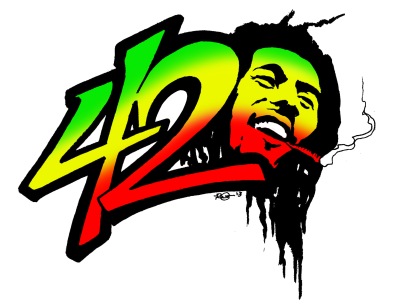 The Dikeou Collection is excited to announce the opening of their new off-site space, Dikeou Pop-Up: Colfax, with an inaugural exhibition featuring Brooklyn artist, Lizzi Bougatsos.  Lizzi will also be DJing the night, picking selections from the Dikeou Collection’s extensive record collection.  FREE.

Come on out to the Alamo Drafthouse to watch/listen to Mile High Sci Fi take on Star Trek IV: The Voyage Home.  What, you’ve never heard of Mile High Sci Fi?  Essentially it is a couple of local comedians making fun of a movie, a la Mystery Science Theater 3000.  Clever and inappropriate, with some of the best audio gags [insert boner noise here] you’ve ever heard…Plus the option to order food and booze right from your seat!  Harrison Rains and Chris Charpentier will be bringing the funny tonight.  Tickets cost $12.50.

Come on out for some tasty vegan cocktails and an assortment of vegan pizzas at the family-owned Bonnie Brae Tavern.  You do NOT have to drink alcohol, nor be a card-carrying vegan to attend.

Beautiful babies of Denver, come dance it out at one of Denver’s favorite indie rock dance nights, Lipgloss, featuring DJ Hollow, DJ Tower, and special guest, DJ Tyler Jacobsen.  To sweeten your evening, they’ll be handing out some tickets to see The Knife, Arcade Fire, and the Tokyo Police Club around midnight.  Only $5 for a whole lotta memories.

I am not even totally sure why, but Mistaken for Strangers was one of my favorite films at this year’s Starz Denver Film Festival.  Maybe I appreciated the themes of inevitable sibling rivalry, finding your own path, and/or the fear of putting yourself out in the world.  Or maybe I liked it because it was really funny.  Regardless, I watch a lot of movies and I would certainly recommend this one.  Whether you are a fan of The National or not, but especially if you is.  Tickets are $7 – $10; full bar at your disposal.

Denver funny ladies Kristin Rand and Mara Wiles, formerly of LadyFace, have teamed up in their new duo – Moxie!  This is their fun-packed sketch show with music and surprise special guests!  Singing, dancing, stretching, strange sounds, etc. – all these things will happen!  Show starts at 7pm sharp.  $8 pre-sale, $10 at the door. 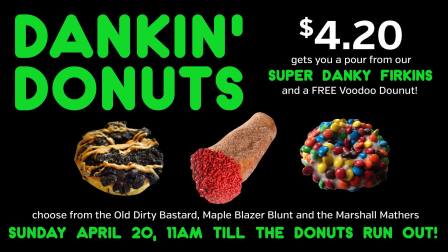 This Sunday, $4.20 gets you a pour of one of Epic’s special, danky firkins and a FREE Voodoo Donut while supplies last!  Donut choices include Old Dirty Bastard, Maple Blazer Blunt, and the Marshall Mathers.

Come on out for this tongue in cheek 4:20 screening of Pineapple Express!  It’s stoner comedy at its best!  Tickets are $7 – $10; full bar at your disposal.

As if your Easter/Bong Rip Day couldn’t get any fuller, Arguments & Grievances returns with another STACKED show.  Friends from San Francisco and New York join local favorites and some dude with TV credits.  Get your weed naps in early so you can rise from your tomb in time for this show; you won’t want to miss it.  Debates this month include Ronald McDonald vs. Jack-In-The-Box, Truth vs. Dare, Blockbuster vs. Netflix, State vs. Nation, April Showers vs. Baby Showers, and the headlining event, Bibles vs. Blunts.  FREE.

Please join the Posner Center for International Development for their upcoming Community Movie Night, where they’ll screen Mandela: Long Walk to Freedom, a chronicle of Nelson Mandela’s life journey from his childhood in a rural village through his inaugurations as the first democratically-elected president of South Africa.  FREE.

Come on in to Pizza Fusion this Tuesday and buy any size pizza and get a pizza of equal or lesser value for FREE!  Free rhymes with me!  Pizza Fusion offers a wide-selection of omnivorous, vegetarian, and vegan options untainted by artificial additives, preservatives, growth hormones, pesticides, nitrates and trans fats.  Additionally, you’ll be supporting this big-hearted restaurant, which also serves as a job training site for transitioning homeless individuals.

Sprout City Farms and the Denver Film Society are partnering to host an Earth Day screening of Growing Cities!  Join them for a one-night-only screening of the award-winning documentary, which examines the role of urban farming in America, and asks how much power it can have to revitalize our cities and change the way we eat.   Tickets are $7 – $10.

The name says it all: cartoons and comedy, bro.  Come LOL as Timmi Lasley, Jim Hickox, and Chris Charpentier poke fun at some old school cartoons and commercials.  PLUS enjoy a bowl of sugary cereal as you reminisce about the good ol’ days.  And don’t worry if you’re short on cash, this ish is FREE.

Looking for a new environment to practice your yoga skills this spring?  Well how about amongst the natural setting of the Denver Botanic Gardens?  The Denver Botanic Gardens is now hosting a weekly Vinyasa yoga class, taught by Blake Burger.  Vinyasa yoga weaves beautiful movement with challenging postures, and cultivates a sense of peace and calm by the end of each yoga class.  All levels are welcome; please bring a mat, a towel and water.  $10 members, $12 non-members.  Please bring cash if possible but credit cards are also accepted.

Join the Sputnik crew as they offer up an Italian-inspired raw vegan menu for one-night only this month: butternut squash raviolis, spaghetti and “meatballs”, and lemon, basil, strawberry granita #getsome

Come celebrate the launch of the Denver On The Rocks app this Thursday evening at Falling Rock Taphouse in the Ballpark neighborhood.  Come meet the team; first people who come we will get a free drink!  FREE.

Spring is here!  It’s time to lighten up our meals and reach for something fresh, delicate, and green!  In this workshop participants will learn how to make a light spring pasta, a pea shoot and walnut pesto, and an amazing cold beet soup.  Participants will also explore lots of other springtime ingredients including eggs, toasted seeds and nuts, cheeses, fruits, roasted vegetables, and a variety of greens to create an infinite variety of salads.  Attendees will have the opportunity to taste everything that is made and even take some food home, so please bring four to-go containers, one of which is suitable for soup.  This is a vegetarian-friendly class.  Workshop fees are $45.

The hosts of These Things Matter will be inviting past guests to tell one story about one song.  Things like, “This song was playing when I had my first kiss”, or “The chorus of this song made me go into the Peace Corps”, or “I can’t listen to this song because it makes me think of my dead cat.”  Whatevs!  Plus, if you’re in the crowd, bring your story and come tell them all about it!  They’ll record you for an upcoming mini episode!  Drinks, food, free pizza cards, DJ No Request, and Milk Machine playing a rad set after the taping!  FREE.