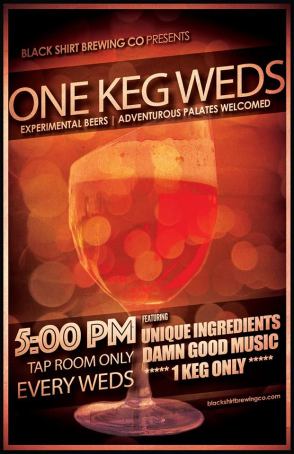 Denver! It’s a relatively slow week for beer events. Everyone is recovering from the holiday gluttony and bracing for New Year’s Eve and then headed straight back to recovery town.

There are at least ten breweries slated to launch in Denver in 2016, all in various states of readiness. One to keep an eye out for is Bierstadt Lagerhaus, which will begin brewing soon in the Bindery on Blake, a facility that also houses C Squared Ciders and the new Rackhouse Pub. Brewing operations will be run by Bill Eye and Ashleigh Carter, formerly of Prost Brewing, on a brewing system acquired in Germany.

This week’s One Keg Wednesday features a collaborative effort between BSB and Huckleberry Roasters. Its name? Zelelu Coffee Saison…on Nitro! Each year, Huckleberry Roasters gets their hands on a large portion of the entire harvest of Zelelu coffee beans from Yirgacheffe, Ethiopia. This particular coffee yields bright citrus characters, beautiful floral tones, and a honey-like sweetness. BSB has carefully blended this coffee with their delicious and complex American Red Saison for a beer unlike any other. Don’t miss out!

There are multiple options for those looking to ring in the Brew Year with some quality craft beer: Live bluegrass with Burn It Blue + special tappings at Fiction Beer Co.; a 1950s-themed party at Declaration Brewing; the Depravity Imperial Peanut Butter Cup Stout release party at Renegade Brewing Co.; music and tappings at Odyssey Beerworks; a masquerade party at Beryl’s Beer Co.; music at the Brew on Broadway; an 80’s karaoke party at Caution: Brewing Co.; Magic Cyclops and tappings at Ratio Beerworks; music and games at Boggy Draw Brewery; and a free pour of Cherry Cross-Eyed Lefty at Denver Beer Co. #Y2K

Ease your hangover by slipping back into besottedness at Epic. They’ll be showing the bowl games and serving up bloody-beers and beer-mosas. Wear your pajamas for 10% off beers. Roaming Bull will be offering a brunch menu.

Dry Dock welcomes 2016 with the release of their first firkin of the year, a Mexican Mocha Stout brewed with cinnamon, hot chocolate, and coffee. (And if you live closer to the South Dock location, they’ll be tapping an Earl Grey Tea-infused L’Escaut Saison.)

Beryl’s Beer Co. is hosting a pancake brunch to usher in the New Year. Morgan Handmade Rations will be making amazing pancakes and latkes for $12 all-you-can-eat and $5 for kids. Yum yum gimme some.

Come play some wee cornhole! Teams of 2; sign up at the bar; winners will get a prize! It’s that simple.