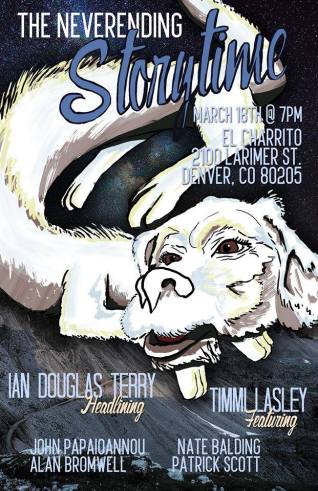 Denver! As you mercilessly scrub the remaining traces of that shamrock off your face, you may be wondering…what’s next? How about a celebration of poetry, gobs of comedy, pickles + beer, bingo, community building, pancakes, free music, rasslin’, pie, nerds, and cartoons?

Plus, be sure to check this week’s edition of Beer Me, for even more good time events.

(And for more free/low-cost events this weekend, check out Westword’s 10 things to do for $10 in Denver blog, which includes The Stompin’ Ground Games: Globeville/Elyria-Swansea at Swansea Recreation Center Park, Collaboration Fest After Party at Mercury Cafe, and Noise Floor at Syntax Physic Opera.)

From the folks that brought you TheBigWonderful comes the new and improved Night Bazaar! This time around, guests will have the opportunity to enjoy delicious homemade food, craft beer and cocktails, artisan vendors, soulful music, and a food truck garden on both Friday and Saturday nights. Happy hour from 2 – 6pm and 10pm – midnight. No cover and a great way to start your weekend!

Mixing hip with the weird, Black Sheep Fridays run weekly March 4 to April 29, from 6 – 8pm in the MCA Café. Visitors can stop by anytime during the evening to experience the fun (happy hour runs from 5 – 7pm). This week’s theme is Poetry Spam, where Denver poets read your spam emails. Free for members, $5 for regular people.

Welcome to another edition of Story Time! Denver’s only one liner show. Comedians this month include Patrick Scott, John Papaioannou, Nate Balding, Alan Bromwell, Timmi Lasley, and headliner,
Ian Douglas Terry. Hosted by James Draper. This event is FREE and you should probably plan on sticking around for the karaoke afterward.

Roll is a monthly themed, old-school roller-skating party, complete with flashing lights, music, karaoke, sippy cup drinks, dancing, and ping-pong! This month, bust out your greens, show your Irish pride, and get ready for a night of shenanigans! FREE admission between 9 – 10pm and $5 afterwards (or get advance tickets, which include skate rental). This event is 21+; sign your waiver ahead of time and avoid the line!

Beautiful babies of Denver, come dance it out at Denver’s favorite indie rock dance night with DJs Hollow and DJ Tower. Hear great music that you won’t hear anywhere else, dance until your legs are weak, and drink until you’ve shown your liver who’s boss. They’ll also be giving away tickets to Holy Holy so get there! No cover before 10pm, $5 afterwards.

Beers & Spears is back! It was such a blast last time, The Real Dill and Denver Beer Co. are teaming up once again to bring you this award-winning combination. (Please note: this combination has never actually won an award.) There will be $10 beer & pickle flights and a spicy pickle eating contest – winner takes home a DBC growler + a jar of pickles!

I had the pleasure of attending the inaugural XX Bingo Night at Base Coat Salon and lemme tell you, I won BIG. $5 suggested donation includes complimentary PBR +  popcorn. Awesome prizes include gift cards to Base Coat, products, wine, and more! Space is limited; please email hello@basecoatnailsalon.com to reserve your spot!

You are cordially invited to an evening of art, comedy, dancing, literature, music, massage, and more at 1280 Sherman Street (above City, O’ City). Come laugh, dance, make some art, get your photo taken, win some prizes, and meet cool people at this FREE event. View the schedule of happenings here.

Live music from The Trip, along with DJs spinning the best in Soul, Ska, Surf, Oldies, and more! No cover.

Beryl’s Beer Co. is hosting a pancake brunch to help you soak up all of the excess from the night before. Morgan Handmade Rations will be offering amazing pancakes for $12 all-you-can-eat. Bring in your ticket stub from Collaboration Fest for $2 off.

Lucha Libre & Laughs brings together wrestling and laughing, which is just what the doctor ordered (if your doctor is Doctor Nick). This month’s show features comedians Hippieman, Garrett Waller, Rachel Weeks, and Ben Bryant; color commentary by Sam Tallent and Nathan Lund; and hosting services provided by Bobby Valentino. Come see who will be crowned the first tag-team champions in LLL history! Tickets are $10, but the bragging rights are free.

Come on down to Denver’s most nostalgic brewery for Pee Wee’s triumphant return to the silver screen. No cover.

End your weekend with a familiar film, $6 cocktails, snacks, and a rad atmosphere. This week, guests can enjoy a screening of Blazing Saddles. No cover.

Amuse Booze is a monthly comedy showcase that appreciates a good hand-crafted cocktail. Three local bartenders will compete to make their own variations of three comics favorite cocktails. One bartender will be named victorious and move forward in the competition, whilst the audience enjoys tasting and laughing at the results. Tonight’s comedians include Deacon Gray (N/A), Christie Buchele (Salty Dogs), Rick Bryan (Hurricanes), and Hippieman (Gin & Tonics). Hosted by Meghan DePonceau and Anthony Crawford. $5 cover; $5 cocktails.

Stop on by Stem Ciders as they pair four slices of pie from The Long I Pie Shop with four ciders, for only $20. You can also order yourself a whole pie from The Long I and pick it up from the taproom that night. View the full line-up here. Yuh – um.

The Ratio Quiz Show is a new show that pits teams of audience members (up to 5 people) against a panel of “experts”. If the expert team wins, the prizes for the audience members suck…if an audience team takes first place, the prizes are AWESOME. This month’s theme is movies, so show up with your friends in the know for your chance to win! FREE.

Did you know you can get delicious booze delivered to your house in under an hour? In honor of Colorado Craft Beer Week, Drizly is now offering FREE delivery when you add any Colorado craft beer to your order from the website or via the app #snowload

If you are a fan of TED talks, the Discovery Channel, Wikipedia binges, and drinking alcohol, Nerd Nite is the show for you. Be there and be square! Tickets are $6 in advance; $8 at the door.

The Doom Room returns with another night of improvised stand up-ish comedy! Come watch comedians make up sets based off of whatever pops up on their SCREEN OF DOOM. Hosted by Ian Douglas Terry and Matt Monroe with Andrew Bueno as the voice of DOOM! Comedians include Aaron Urist, Nicole Conlan, Christie Buchele, Mitch Jones, and more! Always wild, always a party. $5 cover includes FREE beer from Ratio Beerworks. Hell yeah.

Cartoons & Comedy is a nostalgic comedy show, created by Christopher Baker, featuring comedians riffing on your favorite cartoons and commercials from the 80s and 90s. And what trip down memory lane would be complete without tasty cereal? Comedians this month include Preston Tompkins, Zac Maas, and Mara Wiles! And don’t worry if you’re short on cash, this ish is FREE.