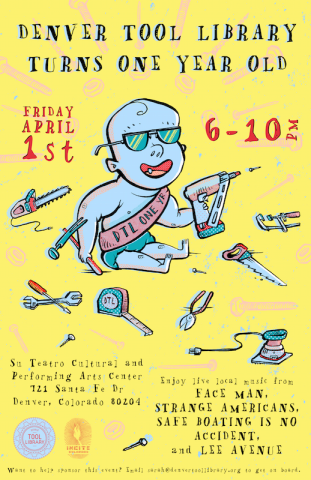 Denver! The weekend is upon us, let’s get down to business. In addition to a whole slew of First Friday events happening tonight, Denverites can also embrace a week filled with bikes, booze, improv, dancing, misfit goods, classic films, teenage angst, and Drake-inspired cakes.

And in beer-related news, my new neighborhood (#VillaPark) will be celebrating the birth of its first brewery baby this weekend with Seedstock Brewery. Although the brewery has quietly been open for the past two weeks, this weekend’s celebration will make it official with food trucks, giveaways, and live music on Friday night. If you live in or near the Westside, I’d highly recommend their Milk Stout and/or IPA!

(And for more free/low-cost events this weekend, check out Westword’s 10 things to do for $10 in Denver blog, which includes the Patio Tap Takeover at Local 46, Zen Coloring Hour
at BookBar, and the RiNo Community Clean-Up at
Rackhouse Pub.)

Come bid adieu to the weekly Night Bazaar. Guests will have the opportunity to enjoy delicious homemade food, craft beer and cocktails, artisan vendors, soulful music, and a food truck garden on both Friday and Saturday nights. Happy hour from 2 – 6pm and 10pm – midnight. No cover and a great way to start your weekend!

Kick off your First Friday in RiNo with lots of wine and eye candy. There’ll be art by Ashley Joon, beats byDJ DealzMakesBeats, and food by Denver 808 Fusion Grindz. No cover!

Mixing hip with the weird, Black Sheep Fridays run weekly March 4 to April 29, from 6 – 8pm in the MCA Café. Visitors can stop by anytime during the evening to experience the fun (happy hour runs from 5 – 7pm). This week’s theme is Drake Cakes, where guests are invited to decorate mini cakes with Drake lyrics and other Drake-related decorations with Valhalla Cakes. Free for members, $5 for regular people. This event is presented by MCA Denver Teens.

Join the Denver Tool Library as they celebrate their first birthday in the Santa Fe Arts District. Have a drink, win a prize, screen print your own t-shirt, and enjoy live local music from Face Man, Strange Americans, Safe Boating is No Accident, and Lee Avenue while learning what a tool library can do for you and your community. Tickets run $5 – $10.

Join the Knotty Tie for a First Friday celebration to rival the best of them. They’ll have all of the things that make it a real Knotty party – music, art, drinks – and will just need your smiling face to make their new building feel like home. No cover.

This First Friday, visit YOUR community access television station for a live, intimate studio performance by Brent Cowles and a joke-telling set by Daniel Reskin. Additionally, learn more about the organization’s new Denver-only radio station! There will also be FREE food from Illegal Pete’s and Sexy Pizza + cheap drinks. Haaaaaaaaay. This event is FREE and located along the Santa Fe First Friday Art Walk.

Governor Jack is one of the longest running and most-celebrated improv + sketch comedy groups in Denver. They were twice featured at the Del Close Marathon (NYC) and were selected to be profiled in the Upright Citizens Brigade’s feature length documentary. Each month, the performers of Governor Jack interview a nationally renowned improviser live on stage and create hilarious improvised scenes based off their responses. Tickets run $10 – $12 and there is a full bar with no drink minimum. At 10pm, Governor Jack will be unveiling a FREE new show called Bumblefuck, which guarantees a plethora of surprises.

Beautiful babies of Denver, come dance it out at Denver’s favorite indie rock dance night with DJs Hollow and DJ Tower. Hear great music that you won’t hear anywhere else, dance until your legs are weak, and drink until you’ve shown your liver who’s boss. No cover before 10pm, $5 afterwards.

Denver! You’ve already hit up a handful of First Friday events and are just buzzed up enough to start dancing…now what? Cue Guilty Pleasures – a party dedicated to cheesy awesome dance jams. (If you haven’t been before, this party is F-U-N.) When in doubt, grind it out. $5 cover; now located at the Hi-Dive.

What better way to start your Saturday than with a workout and a beer? Join Strength Train 4 Life for a total body workout, followed by a happy hour hosted by Declaration Brewing. Workout is designed for people of all fitness levels and limitations can be accommodated if needed. Admission is $10 and gets you an hour workout followed by drink specials. Please arrive around 10:45am to register.

This isn’t your mama’s yoga class…participants will be flowing to the tunes of Hot Water Music and Fugazi to name a few, so come ready to party. Registration costs $15 and includes one brew. Please bring your own yoga mat and towel. 21+

Come shop the samples, seconds, random sizes, misprints, and discontinued items at this unique pop-up market. You’ll find items like jewelry, tees, art prints, frames, dog collars, mugs, cards and more! Plus, you can browse while enjoying a tasty beer from Grandma’s House and snacking on treats from a food truck. No cover.

The warmer weather is a-comin’…can you feel it? This month, DJs Tyler Jacobson, Dogboy, and Steve Cervantes will be doing their thang alongside of special guest, DJ Erin Stereo! They’ll be playing the best soul, funk, and R&B so strap on those dancing shoes and come shake what your mama gave you…only 5 bucks!

Two young siblings are stranded in the Australian Outback and are forced to cope on their own. The film unfolds into a transcendent visual experience of time, space, civilization, and wilderness. Hosted by Denver film critic, Howie Movshovitz, tickets to this classic film are only $1!

Come partake in an all-you-can-eat vegan pizza buffet, benefiting the Rooster Sanctuary at Danzig’s Roost. Friends of the sanctuary, vegans, vegetarians, animal lovers, and pizza lovers alike are encouraged to attend with their friends and families. $15 for adults, $5 for kids + drinks specials from the bar. Raffle tickets and t-shirts will be available as well.

End your weekend with a familiar film, $6 cocktails, snacks, and a rad atmosphere. This week, guests can enjoy a screening of Office Space. No cover #TPSreports

Enjoy a flight of four types of cheese paired with four ciders for only $20. No tickets needed; just stop by. View the full menu here.

Put on your favorite tracksuit and kick back with a glass of wine at IMT’s screening of The Royal Tenenbaums. No cover

A roomful of “grown-ups” sharing their diaries, yearbooks, journals, and notes from when they were tweens and teens? Yes, please! This is an event you don’t want to miss. You’ll laugh, cringe, and commiserate that he never did call when he said he would. Still have access to your old journals? Visit the site to be a part of the show and share your angst with others! Tickets are $12.

Afternoon Delight is a social hour collaboration between Black Black Coffee & Kitchen + TAXI. Join them once a month, in the afternoon, as they gather around, drink some drinks, listen to some tunes, play some games, and meet new peeps. Free cocktails, beer, and snacks with a $5 suggested donation.

Come on out for a new kind of show, combining sketch, video, and standup. The Funnyside Session is a monthly show where Image Brew lets folks run wild in their studio space. This month, there’ll be comedy from William Montgomery, Cody Spyker, Steve Vanderploeg, and your headliner Kevin T. Fitzgerald. $5 dollars to get in and bevvies by donation, courtesy of Ratio Beerworks #LOLZ