The Pressed Conference: A Cider Festival 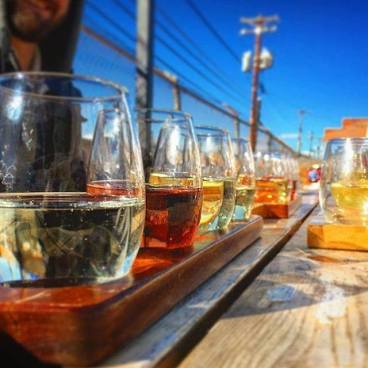 Cider – the other fermented beverage in the beer aisle – is enjoying a surge in popularity. The first annual Colorado Cider Week, organized by the Rocky Mountain Cider Association, is taking place this week and will conclude with the inaugural Pressed Conference on Saturday, May 28, 2016 from 2 – 5pm at the Highlands Masonic Event Center. Tickets are $40 and include unlimited tastes.

The event will feature ciders from across the Rocky Mountain region, the Pacific Northwest, Texas, New England and even a few imports thanks to the Shelton Brothers. Live music from Robby Peoples, food trucks, and lawn games will accompany the tastings. Attendees are expected to number around 450 and the weather looks favorable.

Dear Denver: Colorado Cider Company is about to celebrate its fifth anniversary. Congrats. How has the cider landscape in Colorado changed in that time?

DD: Cider has experienced tremendous growth recently. A statistic that came out of CiderCon this year was that volume grew 12% in 2015. Where does Colorado fit in the overall cider landscape? Are we at the forefront of this surge, are we lagging behind other cider hotbeds, or do we fall somewhere in-between?

BP: Denver is three or four years behind the more developed markets like Portland, Seattle, Chicago, and Boston. Those places are closer to more traditional apple-growing areas. Colorado and Oregon are almost mirror images of each other as far as craft beer goes but I remember when I started in the craft beer industry here in Colorado in 1988, Oregon was probably that far ahead as well. I think we’ll be as developed as those places; we’re just a little more geographically isolated. Colorado is still in its beer-crazy faze, but it’s cracking open a little bit.

That 12% number is a bit of a misnomer because that’s based on IRI data [a Chicago-based market research firm], which is just the big guys and big chain stores. There’s really not a definitive number for the craft segment. We’re not as developed as an association such as the Brewers Association in terms of statistics. I think the big guys didn’t see the same growth percentages as they did in previous years…a lot of that has been taken up by more local cider producers. I would think the amount of cider consumed year over year in Colorado is well above that 12% number.

The Brits drink about 50% of all the cider in the world and their cider industry is about 15% equivalent of what their beer industry is. So it’s a small number relatively, but it’s a big number volume-wise. The overall cider market in the U.S. is 1.5% equivalent of beer.

I’m really confident about the way the market will develop. It’s going to evolve, just like beer did. There are a lot more people planting apples. Eventually it’s going to be very similar to what craft beer is. Not on the scale, but in the variety and flavors [available].

DD: Has the proliferation of craft breweries in Colorado affected the popularity of cider?

BP: I think the biggest thing is that you started to see higher price points for single bottles of beers…we didn’t start with small packages, we started with bombers or 750s. 10 or 15 years ago there weren’t a lot of beers out there that people were paying $10 for but now it’s not that uncommon at all. Also, because the craft beer industry is so developed and the craft spirits guys are coming along, people don’t blink at seeing another…craft ‘thing.’ It’s not just this wine cooler, really super-sweet industrial thing.

DD: For the non-initiated cider drinker, is the tasting process the same as with craft beer? Are there particular elements someone should be looking for in determining an excellent sample of cider?

BP: I think most people that aren’t really cider drinkers, their expectation is thinking on a sweetness scale so looking for a dryer experience is one. Acidity is a big thing for us. If they’re not wine drinkers, the way I would think, if it’s not acidic it’s kind of flabby and if it’s too acidic it’s real sharp. It’s like beer in that aromas play a big part and fruitiness in the flavors. Then, you’ll have [examples] that have other flavors added…I’m sure there will be a few hop ciders there, too.

DD: Cideries from across the country and world will be attending the Pressed Conference, are there any you’re particularly looking forward to trying?

BP: I always like to drink Montana CiderWorks from up in the Bitterroot Valley. Crooked Stave distributes a bunch of Shelton Brothers stuff so we’ll have some European ciders there. It’s always fun to try the French and Spanish stuff. There will be a good broad range.  [Colorado Cider Company will be pouring six ciders: Radl’ah (a new session cider), a one-off firkin of mango bittersweet cider, Newtown Pippin, Pearsnickety, Cherry Glider, and Glider Cider.]

DD: Beyond the beverage choices, how will this “conference” differ from the average beer festival?

Nicki Baumer: It’s going to be really laid-back. Lawn games, live music, food trucks…We’ll have some vendors there as well. Most events at the Masonic Center are inside [but] we’re actually utilizing their front lawn area, which is right along Federal so lots of people are going to notice the event. The band will be playing on the staircase leading up to the entrance of the building.

DD: The Rocky Mountain Cider Association lists 12 producing members and another 15 associate members here in Colorado and while Denver is awash in beer festivals that all seem to draw well, the cider industry doesn’t seem to receive as much attention. What was the reaction of cider producers and enthusiasts like when you proposed the idea of this particular “cider conference”?

NB: It’s been amazing. So many cideries reached out to be involved even after the initial list that I had. Once we announced the festival, we were getting inquiries every day from cideries that wanted to take part. It’s going to be great to be able to walk around and taste different ones that all have different flavors – dryness, sweetness – and be able to compare them. The community too is really excited for it and that’s why we wanted to do a different type of name because it was a new event that was the first of its kind.