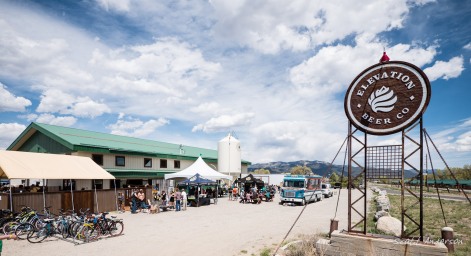 Colorado. The beer frontier. Last week, we discussed the best methods for bringing beer into the wild. But what about letting the beer be the destination?

Colorado is a massive state. Hailing from the East Coast, any drive over an hour usually resulted in crossing at least one state line. Here, drive time from Julesburg (Go Cougars!) in the Northeast corner of the state to the Four Corners Monument in the Southwest is over ten hours (!)

Spread across that vast expanse are over 300 breweries, many of which are worth road tripping for. Here are a few of my favorite destination breweries, in no particular order:

Three Barrel Brewing Co. – Located in we-call-it-Del-Nort-in-these-parts Del Norte, you’re likely to only hit Three Barrel on your way someplace else. Luckily, they’re open seven days a week starting at 11 am and serve food so it makes for a perfect lunch stop. They recently moved into a much larger facility right on Highway 160. Try the Hop Trash, a complex 7.8% ABV IPA and stock up on their sour ales when available.

Dodgeton Creek Brewing Co. – Colorado’s most isolated brewery is a must-stop location on the road to New Mexico. Located just north of downtown Trinidad, Dodgeton is an oasis on an otherwise dry stretch of I-25. Between their flagship Porter, a coffee Porter, and the seasonal Mexican Chocolate Chili Porter, they’ve dialed in on this particular style.

Elevation Beer Co. – At the intersection of Routes 285 and 50, you might not even realize you missed Poncha Springs on your way East to Salida or West to Gunnison/Crested Butte. You’d be remiss not to stop at this beer outpost, though. With stunning views of the Sawatch Range, an excellent on premise food-truck, and the revered Double Black Series of big beers, Elevation is the perfect place to post up and recount your most recent mountain excursion(s).

Roaring Fork Beer Co. – Nestled about halfway between Glenwood Springs and Aspen, Carbondale is less touristy than the former and less ritzy than the latter. You can still book a relatively inexpensive hotel and the area is a springboard for all sorts of outdoor recreation. The brewery pays homage to former Roaring Fork Valley resident, Hunter S. Thompson, selling “Polite as Fork” schwag, a nod to the greatest photo ever taken. Seek out the year-round Extra Pale Ale, Freestone, available in draft and 16-ounce cans, along with its grapefruit brethren, and Hoppa Road, a double IPA.

Colorado Boy Brewing Co. –  With dirt streets and the Uncompahgre River running right through town, stepping into Ridgway is like going back in time. Several notable Westerns have been shot in and around the Gateway to the San Juans. Specializing in English Ales and artisan pizza, Colorado Boy was founded by Tom Hennessy who also offers a week-long immersion class for those interested in starting their own brewery. According to Hennessy, “60% of course participants have gone on to start their own pub in the Frankenbrew style.”

But before you hop in the car and hit the road, do check out these local events this week.

This Wednesday, Fiction will be teaming up with Chocolate Lab to present a decadent pairing to get you over the hump. Tickets are $20 in advance ($25 day of) and include four beers skillfully paired with four chocolates. View the full line-up here.

Speaking of road trips, head up the road to Longmont and the Tasty Weasel Taproom where they’ll be pouring an array of Cigar City Brewing and Perrin Brewing Co. beers, including the highly regarded Jai Alai IPA from the former and Black Ale and Blackberry IPA from the latter. There will be a surprise tapping every hour along with live music and beer can chicken for all.

Aurora’s Launch Pad turns one and they’re celebrating with a slew of special tappings. On Friday, they’ll unveil their anniversary beer, Archer’s Ale, a blueberry honey blonde ale, along with a firkin of S’mores Porter. Saturday will feature a wine barrel-aged Saison while Sunday sees the release of a wine barrel-aged IPA. Food, giveaways, and a dunk tank will round out the fun.

While it might be too hot for ugly sweaters, you can still celebrate Christmas in July at Epic and even get your picture taken with jolly old St. Nick. Mile High Cajun will be roasting a pig and Denver 808 will be serving Huli Huli Chicken. There will be specials on all stouts and porters, along with a specialty firkin tapping.

If you’re more of a purist, then head up to Big Choice to celebrate the actual six-month countdown till Christmas on July 25th. They’ll be tapping a Peppermint Stout and a Red Hot Russian Imperial Stout. And, of course, Santa will be on hand with some gifts for all the good boys and girls.