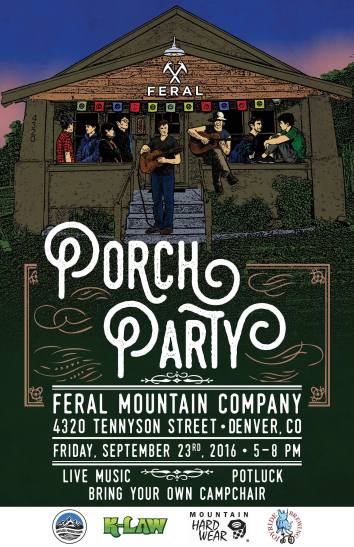 Peep the list below to help keep boredom at bay and for even more options this weekend, consider the 2016 Great American Beard & Moustache Championship, Morrison Cider Fest, the Washed Ashore Beach Party at the Denver Zoo, Renegade Craft Fair at EXDO Event Center, Punk Rock Pizza Wars at the Glitter Dome, the 24th Annual Race for the Cure at the Pepsi Center, Westword DISH at the Sculpture Park, and the opening of the much-anticipated Denver Central Market.

Get a jump­ start on next year’s garden at the Fall Plant & Bulb Sale. Hundreds of bulbs and plants offered, along with expert advice from DBG horticulturists. Please bring your own wagons, carts, wheelbarrows, and/or recycled boxes to transport plants. Sale runs Friday 9am – 5pm and Saturday 9am – 3pm; FREE admission to the sale and to the gardens.

CineLatino is a 4-day cultural celebration of Latino cinema. With 16 titles, the festival features a healthy mix of feature and documentary films, along with new and classic films. The Denver Film Society is proud to recognize the contribution of Latinos in the world of cinema and celebrate the culture with premieres, interactive projects, receptions, and special events. Check out the schedule of films here and plan on attending this unique cinematic event.

Welcome the arrival of fall with a good old-fashioned porch party, complete with beers, live music, lawn games, giveaways, and good times. Bring a side dish or snack to share and Feral will provide the grillables. Anyone who brings something delicious(ish) to the potluck will receive 20% off one full-price item. BYOCC (bring your own camping chair). FREE.

This Friday, Levitt Pavilion Denver presents the fourth installment of their FREE concert series with comedian Aaron Urist, Reason the Citizen, and headliner, Stooges Brass Band. This series is intended to build excitement for the new non-profit venue, which is scheduled to open in Ruby Hill Park next year. This organization aims to build community through music, hosting 50 free concerts per year. Food trucks and local brews will also be available at this event.

Come celebrate Rule Gallery’s new location with the opening night of Wish You Were Here. Through this exhibition, artist Scott Young creates emotionally reactive art using modern materials and technologies such as neon and video. The works in Wish You Were Here give viewers a chance to participate in the emotional experience, creating their own stories about love, loss, happiness, longing, and conflict. FREE.

Join The Denver Bicycle Cafe as they welcome the change of seasons with some frothy brews, brisk breezes, exposed brick, and autumnal LOLs. This show features Dave Losso, Christie Buchele, Harris Alterman, Mara Wiles, Reena Calm, and prodigal son of Denver, Adam Cayton-Holland. Tickets are just $5 and can be purchased at the door.

Roll is a monthly themed, old-school roller-skating party, complete with flashing lights, music, karaoke, sippy cup drinks, and dancing! This month, bust out your pagers, put on those JNCOs, lace up them skates, and get ready to jam to the 90’s as Roll pumps up the volume! FREE admission between 9 – 10pm and $5 afterwards (or get advance tickets, which include skate rental). This event is 21+; sign your waiver ahead of time and avoid the line!

It’s hard to think of a better way to say goodbye to summer than gathering with great company to celebrate Oktoberfest. This casual, festive event is back with only the best beers, brats, and jams. So grab your stein, pull out that German fedora and lederhosen, and come eat amazing food and drink lots of beer! Additional activities include keg bowling, best lederhosen contest, stein-hoisting competition, and live music. No entry fee.

Rotary Club of Five Points Cultural District hosts Back That Truck Up: Food Truck Fundraiser, Denver’s premier back-to-school food truck event, featuring local beer, wine, music, and all of your favorite food trucks. This event is FREE, with an optional suggested donation of $2 per person. All donations and proceeds from food + beverage sales will go to back-to-school initiatives in the community and dozens of other nonprofits in the area. Open to the public + family friendly.

This Saturday, Denver Digerati offers up a fresh perspective on the most popular form of entertainment with Supernova, the first outdoor festival of digital animation + art. The festival emphasizes advances in digital animation happening all over the world today with a variety of programs presented on the 14th Street LED screens at Champa and Arapahoe with a special competition screening in the Galleria of the Denver Performing Arts Complex. The festival promotes the dynamic, rapidly advancing impact technology is having throughout the world today in a FREE, outdoor context.

Swingin’ Denver and Vine Street Pub & Brewery are joining forces to bring you Jazz on the Patio. This event features a FREE swing dancing lesson and live music provided by two of the best swing/jazz bands in town, Odessa Rose and La Pompe Jazz. Dance lessons from 4:20 – 5pm; live music until 8pm.

The Dikeou Collection is pleased to welcome Collective Misnomer as they present a screening of Friends Forever. Friends Forever (the band) never plays inside rock clubs. Instead, they play inside their van outside the club, to stunned bystanders. Nate (drums), Josh (guitar), Jen (lighting), and their three dogs don’t think twice about traveling thousands of miles across the country to play one 15-minute show in a loading zone. Friends Forever (the documentary) captures their smoke-spewing, generator-powered rock world, and the tour that has them crisscrossing the country in search of the perfect parking spot. $10 or pay what you can; no one turned away.

Ditch the limelight, forego the scene, and explore the delightfully dimly lit corners of your city. Weird Touch is a sophisticated all-vinyl dance party collaboration offering an eclectic, yet cohesive mix of darkly tinged nu-disco, indie dance, and weird house. With DJs Fancy Matthew and Shannon von Kelly, $5 gets you to your happy place.

FREE comedy show on the last Sunday of every month, featuring local and national talent in the coolest comedy club you’ve probably ever been to. Pick-up a FREE Sexy Pizza slice card on your way out and end your night with some delicious East Coast-style pizza. This month’s comedians include Harris Alterman, Jason Keyes, Anthony Crawford, Christie Buchele, and headliner, John Tole. Hosting services provided by Eric Henderson. FREE street parking on Sundays!

A Gothic Folktale from Wonderbound

Start your week off right by connecting to yourself and your community! This FREE all-levels yoga class will get your body moving and breath flowing while enjoying Denver’s beautiful warm-weather nights. This class is supportive to beginners and creative enough for more experienced practitioners. Please bring your own yoga mat and check any weather-related changes via their FB page.

Back by popular demand, Stem Ciders is excited to present talented up-and-coming songwriters from Colorado. Each month, they’ll feature a changing lineup of incredible musical performances. The order will be randomly decided immediately before the music starts at 7pm, so get there early to catch everyone.

The Great Debate pits teams of non-experts head-to-head, toe-to-toe, and often dumb-to-dumber in lively debates of the inconsequential. This month’s theme? People’s Court vs. food courts! Box office opens at 7:30pm, and the feud starts at 8pm. $6 – $8, depending on your luck, or reserve your spot ahead of time.

Get a sneak peek at some of the costumes, dance, music, and magic behind the next Wonderbound production, A Gothic Folktale. Featuring dance, live music, illusion, and a Q&A with the artists, you won’t want to miss this chance to experience the creative process behind this fantastical production. Tickets are $30; light appetizers + libations will be available.

Bring your bike and learn how to tune up, do basic repairs, and maintain it. In this class, instructors will go over how to keep your bike up to speed and then answer any specific questions you may have.

Jogtography is a weekly running club that incorporates the basics techniques of photography. Runners bring their cameras/camera phones and take pictures during the run. Photos can be uploaded to Instagram or Facebook for a chance to win weekly and monthly prizes. Cost is $10 and includes a free post-run/walk/jog beer.

Black Shirt Brewing Co. (BSB) and Denver Public Library (DPL) are teaming up to spread awareness for Volume—a local music website that will allow Denver Public Library card holders to download and stream music from local bands and musicians. DPL will also be on site with their mobile library, full of books about music and beer. Additionally, BSB will be hosting their monthly Pie & Beer Pairing event with The Long I Pie Shop that night…beer + pie + books = hooray!

If you are a fan of TED talks, the Discovery Channel, Wikipedia binges, and drinking alcohol, Nerd Nite is the show for you. View the line-up here. Be there and be square! Tickets are $6 in advance; $9 at the door. 18+