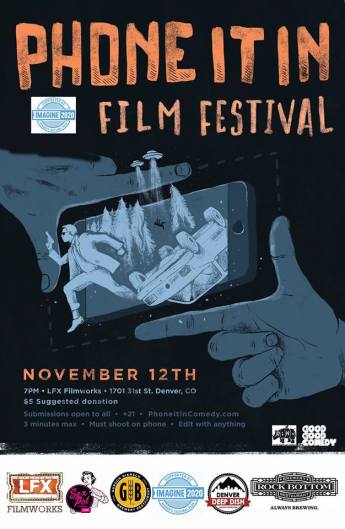 Hey, Denver. Brief announcement: After spending the last 3.5 years hunched over at my computer, producing this weekly column all by my lonesome, I am in need of a break.

I will be taking some time off to re-group and see if I want to continue this column with the same format, or try something different.

During this time, I will continue sharing content via Facebook, posting the weekly #BeerMe column from my beer writer, Matt Sandy, and I hope to work on some other types of content for this blog.

Please feel free to send your thoughts on what you like best about this site, what you find most useful, and anything that you wish I covered via this blog.

Thanks as always for your support and as per youzh, I hope you have an amazeballs weekend, xoxo.

Peep the options below for some F-U-N times this week and for even more options this weekend, consider Friday Night at the AnneX at the McNichols Civic Center Building, Physical Proper: Solo Works by Olivia Ciummo at Dikeou Pop-Up: Colfax, the Winter Gift Market at Denver Botanic Gardens, Ben Folds: Master Work with the Colorado Symphony, Denver Veteran’s Day Parade & Festival at Civic Center Park, and Star Wars and the Power of Costume at the Denver Art Museum.

It’s the final weekend of the 39th annual Denver Film Festival and there are plenty of films/events to be experienced. Click here for festival-going tips, movie recs, and more #DFF39

Mixing hip with the weird, Black Sheep Fridays are back. This week’s theme is Folked Up Karaoke, where guests can sing karaoke while backed by a live folk band. Free for members, $5 for regular people. Come early as to not miss out; happy hour runs 5 – 7pm.

Chicago & LA’s favorite shameful storytelling show has come to Denver! Come hear real regretful stories from some of Denver’s best comics, toast their bravery, and have a chance to spill some of your own beans! Hosted by Dave Losso; view the stellar line-up here. This show is FREE.

Gather together as a community to make personal commitments to change. Food + drinks will be provided!

The election is over! Come jive with jubilation or shake the blues away at this good old-fashioned dance party, complete with food, drinks, and live music from the Pink Hawks and Mile High Soul Club! $7 suggested donation but no one turned away for lack of funds.

Buntport Theater continues its newest comedy series for all ages. Inspired by Homer’s Odyssey, an audience-suggested song launches each play-full voyage. Tickets are $7 online, $8 at the door. Pirate costumes are encouraged!

The first-ever Denver Phone It In Film Festival is happening this Saturday. All films in the festival must be shot on a phone, be under three minutes, never premiered, and submitted prior the deadline. Additionally, participants must be 21+. After the festival will be a mixer/party so come ready to celebrate. $5 suggested donation.

Rock & roll will save the world. Come party with SPELLS as they release their first full-length 12″ record, Staying In Is The New Going Out. Additional performers include LOW FORMS, Ned Garthe Explosion, and Shame Ray. $7 cover or $15 with the record #SPELLSRULE

$5 suggested donation for beautiful music in a great community space. Come early to grab a drink downstairs at City O’ City before the performance!

You’ve likely never heard Grandma utter even the slightest of bad words, but that’s because she got it out of her system with her embroidery needles. The brewery will be providing all of the materials, just grab a couple pints, settle in, and stitch to your black heart’s content. FREE.

Learn the art of ratatouille, a fragrant vegetable stew. Gourmand Emily Peros-McBreen’s engaging and informative cooking demonstration will inspire you to create your own version this winter. Come for the cooking demonstration and stick around for the animated culinary classic film of the same name after the demo. FREE. 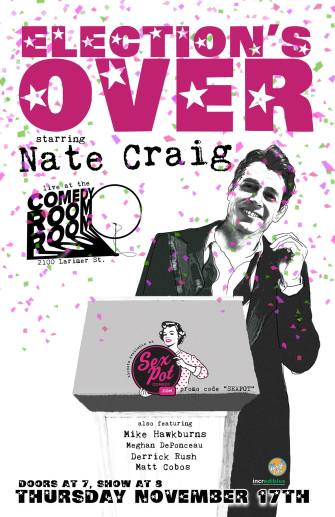 The Great Debate pits teams of non-experts head-to-head, toe-to-toe, and often dumb-to-dumber in lively debates of the inconsequential. This month’s theme? Jimmy Buffett versus all-you-can-eat buffets! Box office opens at 7:30pm, and the feud starts at 8pm. $6 – $8, depending on your luck, or reserve your spot ahead of time.

On Wednesday, November 16th, come break the day with DAYBREAKER by donning your favorite onesie and dancing it out with your fellow Denverites. Tickets start at $20 and includes coffee, juice, and breakfast treats. View the DAYBREAKER experience here.

November is Candy Cask Month at Copper Kettle. This week’s Gingerbread ESB is an English-style Pale Ale with a perfect hop bitterness and malt balance and has a more bitter taste than traditional pale ales.

Practicing vinyasa yoga on a daily basis can improve posture, flexibility, and endurance. Beyond the physical benefits, yoga helps to bring a sense of clarity to challenging situations in life, reminds us to stay present and focused in an ever-changing environment, and can help us find happiness and contentment in our surroundings. Please bring a mat, a towel and water. Cost is $10 for members; $12 for non-members.

If you haven’t been to The Narrators before, it is pure gold. It is essentially like This American Life unfolding right in front of your beautiful smiling face. One of the best things to do in Denver – hands down. This month’s theme is Overindulgence. Admission is FREE, plus there is cheap beer to sip on while you listen, haaaaaaaaaaay.

Let’s forget our troubles with nature’s greatest medicine, laughter! Sexpot Comedy presents another killer showcase with Nate Craig, Mike Hawkburns, Meghan DePonceau, Derrick Rush, and the Mustached Madman himself, Matt Cobos, hosting the evening. Nate Craig has appeared on MTV, Comedy Central, The Bob & Tom Show, and was a finalist on Last Comic Standing. Purchase your tickets online with promo code SEXPOT for 50% off or pay $10 at the door; you decide.

This Thursday, sip on some cider while listening to the sounds of the Steepland String Band in Stem’s RiNo taproom. Moontime Crepes LLC will be serving the eats. No cover; happy Friday eve!

This show just may be what the doctor ordered. Colorado’s own Strawberry Runners + Anthony Ruptak will be filling the Ubisububi Room (located below The Thin Man) with soulful tunes that will assure you that everything will be okay. Tickets are $10 and are expected to sell-out, so do buy in advance!