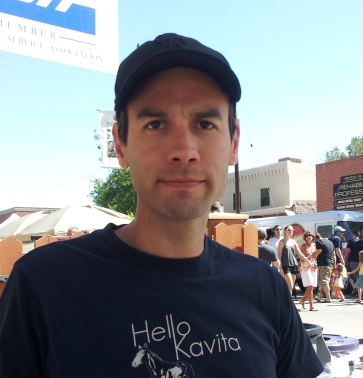 Mark Hagelberg is serious about veganism

Plants & Animals is definitely one of my favorite organizations in town.  They run a number of events including Chomp, a monthly vegan community dinner, Neat Market, a monthly vegan pop-up market, Carrotmobs at various local businesses that support veganism, a vegan prom, as well as other one-off events.  My favorite part of Plants & Animals is that you don’t have to be a full-time vegan to get involved.  They accept all kinds, however are creating a space to learn more about the vegan lifestyle.  This local list is brought to you by one of the many individuals behind Plants and Animals, Mark Hagelberg.  Mark will be joining the P&A crew this Sunday for Neat Market in its new home at The Horse Barn.  The Horse Barn is a relatively new community space, located in the Curtis Park nieghborhood, which supports international and community development.  If you haven’t been to a Neat Market before, you should totally go check it out, whatever your culinary/social leanings are.  Vegan or not, you will find friendly faces, delicious treats, and just an overall positive atmosphere.

A little about yourself: I enjoy reading about what’s wrong with the world, stifling my fury, and carefully converting that rage into nice things. I believe that choosing to go vegan is the most empowering thing one can do to disrupt our broken status quo. I’m actually a pretty happy person, despite what this sounds like.

Favorite restaurant in Denver: Sigh… Native Foods when it gets here.  Soon!

Favorite overall place in Denver: The Curtis Park neighborhood on a Saturday night.

Best event in Denver: The UMS was too good of an idea.

Best new trend in Denver: I feel like I see more cycling than ever before, which is great. Coffee culture is also improving.

Fondest Denver memory: Arcade Fire at the Larimer Lounge, even though I was working and could only see glimpses of the backs of their heads.

What’s missing in Denver? A vibrant activist culture. There seems to be something about Coloradans that prevents us from stirring shit up too much.  Maybe we’re too nice.  I would love to see massive demos and protests and unrest in the streets of Denver.  It’s a sign of a population that cares about its future.

A friend has three hours to kill in D-Town, what should they do? A meal at City O’ City followed by a stroll up 13th Street, poking your head into the shops.  Then take a B-Cycle to Hooked on Colfax for a Great Divide beer (or coffee).

New, proposed slogan for Denver: The Juggalo Capital of the West!

The now-closed restaurant/bar/business in Denver that you miss the most: Yellow Feather Coffee.  I loved the atmosphere there.  Also, it was one of the places that let us put on some of our first community dinners when Plants & Animals got started.

Anything you want to plug? Neat Market is a DIY pop-up market that features local small-scale producers and 100% vegan goods.  It is on the third Sunday of every month. The next one is at The Horse Barn on Sunday, September 15.