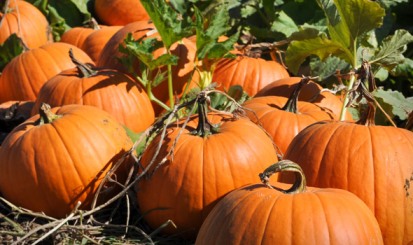 Ahhhh, autumn is in the air.  Makes me wanna break-out the flannel, brew a batch of hot toddies, build a fire, and make-out with a lumberjack.  And then afterwards, probably check-out some of these events.

(And as always, check-out Westword’s 10 things to do for $10 in Denver blog for free/low-cost events this weekend.  PLUS check-out this calendar of lower-key beer events, happening alongside of the Great American Beer Fest this weekend.)

Embrace the fall season at this year’s Pumpkin Festival. This three day event is a great tradition for the entire family where thousands of pumpkins will be ripe for the picking in the garden’s 10-acre patch. Families can enjoy live music by Stray Dog Colorado, express face painting, pumpkin carving demonstrations, and pumpkin bowling.  Kids can also enjoy pony rides, amusement rides, balloon twists, giant coloring murals, and a cookie decorating station.  Admission ranges from free (children 2 and under) to $7 (adults).

New Belgium Brewing and Jolly Pumpkin Brewery are teaming up to host an exclusive Great American Beer Festival brunch, featuring unique beer and collaborative beer, only available at City, O’ City.  Tickets are $55 and include three beers, three courses of food from creative chef Kurt Eichenberger, as well as a pastry from Watercourse Bakery’s pastry chef, Letisha Steele.  Spaces are filling up quick, so call ahead to make a reservation.

Do you want to start your weekend off in a beautiful space, surrounded by art, listing to music?  Well then, see you tonight at Leon, fine sir.  Musicians Mike Coykendall and multi-instrumentalist Tom Hagerman (of Devotchka) will be performing.  FREE.

After the show it’s the after party then, after the party it’s the hotel lobby…New Belgium Brewing presents the Great American Beer Fest After Party with A. tom collins, Ark Life, and The Yawpers at the Hi-Dive, yo.  The show starts at 9pm and is free for GABF ticket holders; $5 otherwise.  Do not miss this party!

Michael may be gone, but his legend is eternal.  Sing and shake to MJ’s greatest hits.  A hee hee!  Tickets are $12.50

Punkin Chunkin Colorado is an annual ritual where people travel for miles to see how far they can lob a gourd.  It’s the 16th year for this zany event that engages the energy and ingenuity of youth and adults, while inspiring a fresh twist of creativity.  This year there will be a full mile range to entice the “big guns”, and make the competition more exciting.  Additionally, attendees can enjoy various crafts, activities, food vendors, and a beer garden.  View the schedule of events here.  Free parking; $3 for individuals 13 years and older.

On the second Saturday of each month, Buntport presents you with three stories related to a theme.  This month’s theme is: Spooky Bizness.  Two of these tales are true, but one of them is nothing but a fib.  Can you figure out which one is baloney?  Fun for all ages (seriously grown-ups, this is an event that both you and your kids will enjoy), cute contests, and prizes to boot.  Tickets are $6 – $8, with $1 off if you dress as a duck, or something pretending to be a duck.  (So in other words, whatever you were planning to wear that day anyway.)

If you have yet to go to Black Shirt Brewing Co., no is your chance to check out this East Larimer gem.  They’ll be tapping some of their most rare and sought-after kegs, as well as a full board of spectacular Red Ales, including: Beet Saison, Coffee Red Porter, Chai Red Ale, Caraway Pale Red, Sticke Altbier, Red Farmhouse, Barrel-aged Red Ale, and an Imperial Red Rye Stout.  Food, music, and beer = happiness.

The Handmade Homemade Market is a place where you can find local high-quality food, art, crafts, and products made by your neighbors and friends here in Denver.  Start your Christmas shopping early and keep it local!

Coloradical, the original clothing brand of the Colorado lifestyle, will open the doors on its first brick and mortar shop on East Colfax.  The four-year-old company, created by Denver resident Adam Sikorski, offers a line of American-made and locally produced, Colorado-inspired T-shirts, hats and accessories that have generated a noteworthy following around the state and country.  What began wholly as a DIY startup has grown into a Denver mainstay that demanded the need for a permanent location.  Come celebrate Coloradical’s new home with music, giveaways, new designs, and free beer from New Belgium Brewing.  Live the rad life, y’all.

Every third Tuesday starting around 7:30, Crash 45 will screen a classic film from the 80s. Come down and remember the good old days, when fashion was wild, and movies were amazingly cheezs!  There will be movie-themed gifts and $20 for the best movie-themed costume – ca ching.  This month’s screening is Weird Science.  FREE.

The Great Debate pits teams of non-experts head-to-head, toe-to-toe, and often dumb-to-dumber in lively debates of the inconsequential.  Mundane topics are brought to life by ordinary, but opinionated folks.  You’re bound to be a flip-flopper after listening to compelling arguments on things that never mattered.  This month’s theme?  Beetles vs Beatles.  Box office opens at 7:30pm, the feud starts at 8:00pm.  $5 – $7, depending on your luck.

Tuesday, October 15, 2013 @ 10pm: Kevin and Jordan’s Traveling Airborne Shindig Presents All Horror’s Eve Part One: Trick or Treat or Transform Your Life at the Deer Pile

This Halloween-themed show is a mix of live sketch, ridiculous characters, and extreme stunts by not so extreme people.  Imagine if Ed Sullivan and Conan O’Brien had a baby with a mohawk and it talked like Groucho Marx.  If you miss this show your house will be teepeed.  FREE.

With 140 entries in this year’s New Talent Contest, every comic involved will have to step up their game and sharpen their best five-minute set for the chance to win a cash prize and a possible advancement in the Comedy Works hierarchy.  The contestants have been slinging their mic skills at Comedy Works since last May, and finalists Jordan Doll, Mike Hammock, Nicole McCormack and Zac Maas, along with four other comics, will be entering the final round to determine what name you will surely be hearing more of in the years to come.  Tickets are $12.

Goldyn, a LoHi clothing boutique, is excited and honored to have teamed up with artist/photographer Kristen Hatgi-Sink this season for a series of wet plate collodion photographs, inspired by fall fashion and different head pieces on seven different models, entitled Crowns.  Join the opening reception, hosted by The Scout Guide – Denver, to sip champagne, nibble on hors d’oeuvres from Coohills Restaurant, and preview/shop this amazing new series.  This event is FREE.

Delve into the dark side of the museum with a
flashlight tour of the dioramas.  But beware—parasites, spiders
and other creatures of the night will abound.   Learn about cryptozoology
as well as real scary critters.  Wear your most frightening frocks if you dare!  $10 for members, $12 for nonmembers; ages 21+ only [insert maniacal laugh here].

If you haven’t been to The Narrators before, it is gold.  It’s essentially like This American Life unfolding right in front of your beautiful, smiling, and expecting face.  October’s theme is “Two Sides to Every Story.”  Pairs of storytellers will be relating their version of a shared experience, kinda like a storytelling thunderdome.  One of the best things to do in Denver, hands down.  Admission is FREE.  (Plus there is cheap can beer to sip on while you listen, haaaaaaaaaaay.)

Come on out to the Alamo Drafthouse to watch/listen to Mile High Sci Fi take on The Texas Chainsaw Massacre!  What?  You’ve never heard of Mile High Sci Fi?  Essentially it is a couple of local comedians, making fun of a movie, a la Mystery Science Theater 3000.  Clever and inappropriate, with some of the best audio gags [insert boner noise here] I’ve ever heard…Plus the option to order food and booze right from your seat!  Harrison Rains and Kevin O’Brien will be bringing the funny tonight.  Tickets cost $12.50.