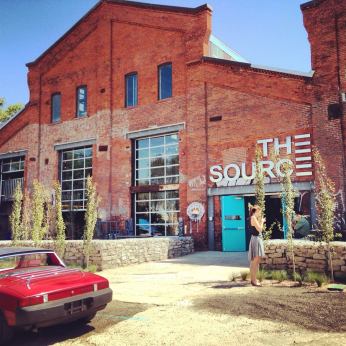 Hey, Denver.  This weekend I’ll be heading out of town to check-out this place with some homies, so the rest of you will need to party twice as hard this fin de semana.  And with the Great American Beer Festival (GABF) rolling into town next weekend, there are LOTS of preliminary beer-centric events this week that you should take advantage of…it only happens once a year people!  xoxo.

This four-day event will feature a wide variety of celebrities, filmmakers, artists, and the very best genre films from around the world.  2013 special guests include:  Linda Blair, Tom Savini, Rowdy Roddy Piper, The Enigma and many more.  View the schedule here and purchase tickets in advance to avoid a sell-out.  Need more inspiration?  Peep the festival trailer here.

Calling all sour beer fans – Crooked Stave is re-opening at The Source!  The new taproom will be significantly larger than the current one, but it will still retain an intimate feel.  Additionally, the new taproom and brewhouse will allow the Crooked Stave crew to serve a broader horizon of beers and give them room for more experimentation and collaborations.  Crooked Stave’s neighbors in The Source  include two restaurants (Comida and Acorn), Babette’s Artisan Bakery, Boxcar Coffee Roasters, Meathead, CapRock Farm Bar, Mondo Market, Proper Pour, Collegiate Peaks Bank, and an art gallery.

WaterCourse Foods and Strange Brewery are partnering for a Southern-inspired beer dinner this Friday beginning at 5pm. Chef Rachel Kesley and her sous chef Sean Kendrick have created a six-course experience that takes classics of the South to a whole new level of culinary delight.  Guests will have the pleasure of such re-imagined favorites as deep-fried deviled eggs (with a vegan version available), potato salad, pimiento cheese spread with a varietal pickle plate, and a sweet tea “chicken” and waffle main course.  Dessert ends with a warm cobbler and vegan salted caramel ice cream, along with Goo Goo Clusters (haaaaaaaay…)  WaterCourse Foods is currently taking reservations, call 303-832-7313 to make yours.  Guests will have the option of the full prix fixe dinner ($70) or selecting a la carte.

Free food, free beer, free music, and free fun.  Head on down to your local public access TV station for a FREE, live studio performance by Pretty Mouth!  Illegal Pete’s will be providing free grub and Great Divide Brewing Company will be providing the free brews.  Free rhymes with me!  Local nonprofit Brent’s Place will be spotlighted and folks will have the opportunity to learn more about the media-making opportunities at DOM.

From the artist: “I received a text from my parents asking to Skype that evening.  As I stared back at my parents’ grainy image on the monitor, I heard the words, ‘I have cancer’…That evening changed everything for my family. The life that we once knew was permanently altered.”  This striking exhibition debuts over fifty new works of art featuring Jessica’s mixed media approach incorporating materials such as wood, wire, fibers, silicone, acrylic paint, graphite, video, and sound. This exhibition explores the concept of reconstruction in the wake of tragedy; a common thread that binds so many lives.

The Denver-based company, Awkwrd, makes fashion for the socially challenged. Their reductive, modernist design turns awkwardness into geek-chic style. For this Fancy Tiger event, Awkwrd will be showcasing a line of leggings made from custom-printed textiles.  Put your fall fashionable foot forward, and come party down – Baker-style.  Beverages will be on hand from Fancy Tiger’s sponsors Breckenridge Brewery and Pabst Blue Ribbon.

Do you speak Spanish or kind of speak Spanish?  Have you been looking for an opportunity to practice?  Then dust off those tildas and head on over to Hooked on Colfax this Friday night to have some drinks, roll your Rs, and make some new amigos.  Como se dice, “Those pants would look better on my bedroom floor”?

The Horseshoe Craft & Flea Market is a seasonal open-air market where emerging, undiscovered, and experienced artists, crafters, and antique/vintage collectors in Denver can set-up their own shop and meet their customers. It’s a rare and wonderful shopping destination where customers can engage with and buy directly from local makers, creators and collectors. You’re sure to stumble upon some pretty awesome, lucky finds!  Come for the kitty cat creamer, stay for the food trucks and the treats.  Oh and read their market tips here.

The Picture.Me.Here exhibit opens this Saturday, October 5th with an opening reception from 3 to 6pm. The students will be in attendance and would love for you to come celebrate their photographs and stories.  The exhibit will be up through the 26th of the month, so please stop by during normal gallery hours throughout October if you are unable to attend the opening.

First Saturday of the month, starting at 9pm – Soul, Funk, pre-1975 – Curated by some of the hippest cats in town and always an absolute packed house.  One of my faves for sure.  $3 cover after 10pm.

At my mother’s house in Springfield, PA, there are stacks of dusty journals, chronicling my journey of trying to “figure shit out” when I was a teen.  Since then, the world has become much more public and although I no longer keep a journal per say, I am compulsed to share what I am thinking at any given time via Facebook and the Tweeter, usually whilst riding the bus.  Luckily there is an event which celebrates the old-fashioned way of processing the world around us, and it’s called My Teenage Angst.  Still have access to your old journals?  Email reader@myteenageangst.com and be a part of the show.  $2 suggested donation; any therapeutic results are free.

Celebrate the start of the 2013 Jimmy & Rosalynn Carter Work Project, which will begin building eleven new homes and repairing fifteen existing homes in Globeville beginning Monday, October 6.   The Community Kick-Off event will feature activities for the entire family including games and prizes, fun activities for kids such as face painting, clowns and more, information booths about Habitat and Globeville, and food and beverages for sale by local vendors.  The Duke Street Kings band will perform classic rock and roll, and the Denver Nuggets dancers and Rocky the Mascot will be there too.

Looking for low-cost, creative gift ideas for the holidays?  This hands-on class will include instruction on the basics of water bath canning.  Participants will assist in the canning preparation and process and receive a jar of each item to take home including: pear & vanilla bean jam, caramelized onion confit, and spiced tomato jam.  Class also includes recipes for the items prepared and information about canning equipment and canning/food safety issues.  $45 includes materials; register now.

Whether or not you were lucky enough to obtain a ticket to the Great American Beer Festival, join the party on October 7 & 8 for 12 all-new episodes of The Beer Diaries, celebrating Colorado’s amazing craft beer scene. There will be beers, there will be brewers, and there will a chance to meet and greet the folks from The Beer Diaries team as well as the people who make some of your favorite beers!  View the site to see which breweries are featured in which episodes.  Tickets are $16.

Beers Made By Walking has invited seventeen breweries across the state to take a hike, literally, and then make specialty beers inspired by the edible and medicinal plants found along the trail.  Each beer in this series represent a drinkable landscape of areas throughout Colorado.  You’ll get to taste a portrait of Boulder’s historic Chautauqua Park, the Palmer Lake Reservoir Trail in Colorado Springs, a beer inspired by a neighborhood stroll in Denver, and many others.  The beers will be available for one night only.  Tickets will be available on the night of the event or you can purchase them in advance.  Tickets cost $30, and give you access to unlimited samples of each specialty beer.

Experience the tongue tantalizing flavors of sour beers, paired with delicious bites from the popular Central Bistro kitchen.  Cost is only $25 per person and there are only 30 seats available, so call today – 303-477-4582!

Whether or not you were lucky enough to obtain a ticket to the Great American Beer Festival, join the party on October 7 & 8 for 12 all-new episodes of The Beer Diaries, celebrating Colorado’s amazing craft beer scene. There will be beers, there will be brewers, and there will a chance to meet and greet the folks from The Beer Diaries team as well as the people who make some of your favorite beers!  View the site to see which breweries are featured in which episodes.  Tickets are $16.

This alley will be transformed into a pop-up bar, featuring beers from Upslope, Renegade, Bristol and Ska Brewing.   The event is aimed at creating a conversation around how alleys can better function as a part of our public space network and as a pedestrian amenity.  Tickets to this unique event cost $25 and include unlimited craft beer tastings and food provided by Rialto Cafe.  Get $5 off by using promo code: ourfriends at http://brewersalley.eventbrite.com/

The Creative Collective is a professional networking collaborative for the creative industry, focused on sharing innovative ideas and making valuable connections.

More creative collaboration!  Each month, over 100 creative individuals come together to mix and mingle. Representing small businesses, creative industries and startups, this group is sure to introduce you to the people, resources and exposure that your small business needs to grow.  The best part is…the food is free and there’s no fee to get involved! 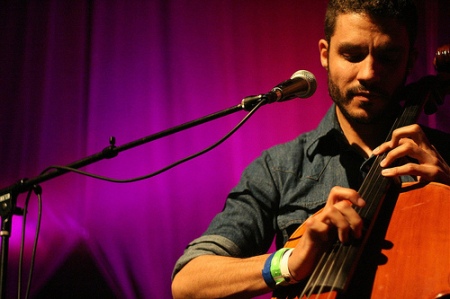 Be one of the lucky ones to catch this event!

12 barleywines, 1 deranged night.  Enjoy an unlimited tasting of a collection of barleywines from all over the country. $30 includes tastings and a full-size commemorative glass.  Get yer tickets now.

Ian Cooke will release the long-awaited animated short film for his epic love story “Cassowary & Fruit Bat” at the Sie FilmCenter in Denver, Colorado on October 10th, 2013.   A VIP ticket includes a viewing of the short film, a documentary about how it was made, a free copy of the book/CD/DVD package, a Q&A, and and intimate live solo set from Ian himself.  VIP tickets costs $25 – $30, and are limited to 35 (lucky) people.  Tickets for the screening only are available as well and cost $7 – $10.

Come on down for the first show of the season!  Cult Following is a movie created live by Sarah Kirwin, Nanna Thompson, Jessica Austgen, Brian McManus, Chris Woolf, and Asa Erlendson.   This real 3-D experience features a different movie genre each time along with movie trailers, low-budget special effects, and amateur stunts performed by the actors themselves.  This month’s genre is dance/competition.  Tickets are $15 each and include 2 free beers and popcorn!