This week I’m gonna leave it short and sweet because I really really think you should attend the Starz Denver Film Festival this week (which runs through Sunday, November 17th).  Especially if you’ve never been before.  And if you have.  Feel free to comment below if you go and wanna recommend a film to others, or follow me on Twitter to get some recs: @Dear_Denver.  XOXO.

Chef Kesley is creating a 5-course vegetarian extravaganza that will feature amazing local produce and pair perfectly with 6 delicious wines.  Reservations are strongly recommended!  $70 for 5 courses, accompanied by the wines.  View the menu online – yum!

Mixing hip with the weird, Black Sheep Fridays runs weekly October 11–December 20, 2013, from 7 – 9pm in the MCA Café.  Visitors can stop by anytime during the evening to experience the fun.  This week’s theme is Harpcore: hip-hop classics performed on the harp.  Free for members, $5 for regular people.

Do you speak Spanish or kind of speak Spanish?  Have you been looking for an opportunity to practice?  Then dust off those tildas and head on over to Hooked on Colfax this Friday night to have some drinks, roll your Rs, and make some new amigos.  Como se dice, “Daylight savings is mad depressing, yo”?

Adapted from Stephen King’s novel Carrie, this play focuses on an awkward teenage girl with telekinetic powers whose lonely life is dominated by an oppressive religious fanatic mother. When Carrie is humiliated by her classmates at the high school prom, she wreaks havoc on everyone and everything in her path; score. $20 for general admission; occurs again on November 9th & 15th.

You’re invited to experience the sights, sounds, aromas, and tastes of the holidays in Paris.  Admission is free to this arts and crafts market, sponsored by The Denver Public Library. Sample some amuse-bouches (French nibbles) while enjoying warm cider or a rich cup of coffee — all with a backdrop of Paris cafe music.  Featuring live accordion music at 1pm and 2pm.  There will be lots of holiday shopping, too – great gifts from local creatives.  A wonderful chance to support artists and businesses in your community! 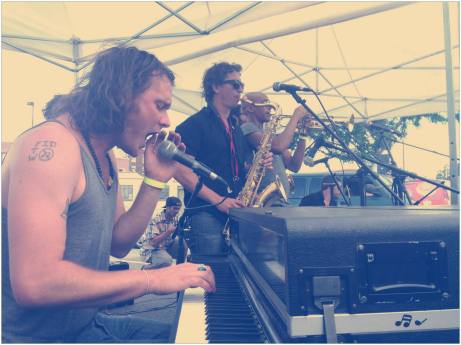 More lint in your pockets than pesetas these days?  Come check-out the Parlour Pickers and Saturn Cowboys at Illegal Pete’s South Broadway this Saturday for FREE!  You will leave with a smile on your face to offset the lint in your drawers.

A. Tom Collins are shooting a new music video and need your help.  Shoot starts at 9am, and goes until 1pm, so show up earlier.  You will be fed and watered.  If interested, RSVP on their Facebook events page and plan to wear black or some sort of weird funeral march costume.  I am guessing this will be a pretty raucous time, even for a Sunday morning.

Come nosh on some tasty eats at the Squeaky Bean, and try your luck at the ‘go.  Each week features a different comic, with this week’s host being the very funny Greg Baumhauer!  Make your reservation today.

Medora follows four boys from rural Medora, Indiana, as they fight to end their high school team’s losing streak, while their dwindling town faces the threat of extinction.  Medora is an in-depth, deeply personal look at small-town life, a thrilling, underdog basketball story, and an inspiring tale of a community refusing to give up hope despite the brutal odds stacked against them. On a grander scale, it’s a film about America, and the thousands of small towns across the country facing the same fight.  View the trailer here, and get ready for the goosebumps.

Denver’s bicycle community met last September to ride and provide input on the City & County of Denver’s plans for redeveloping the Brighton Boulevard corridor.  Consensus for a protected bikeway along Brighton Boulevard–a.k.a the “1/2 mile Death Dash”–became clear during the meeting and has continued to grow support.  Once again, the bicycle community is invited to attend a public workshop this Wednesday to share their thoughts on how to redevelop Brighton Boulevard so it is transformed into a better place for bicycles.  Read more about this project here.

More creative collaboration!  Each month, over 100 creative individuals come together to mix and mingle. Representing small businesses, creative industries and startups, this group is sure to introduce you to the people, resources and exposure that your small business (or big dream) needs to grow.  The best part is…the food is free and there’s no fee to get involved!

On your way home from work, come shop a curated selection of housewares, gemstones, plants, and other curiosities from the way cool South Broadway shop, Ironwood.  Opening reception runs 6 – 9pm; pop-up shop will remain at Goldyn through mid-December.

The Sidewinder Tavern could very much be your new favorite bar.  This neighborhood watering hole boasts live music, great drink specials, wood paneling, free pool, and friendly bartenders.  Come on out to this Globeville destination bar and LOL with the comics from the Fine Gentleman’s Club – Sam Tallent, Nathan Lund, Chris Charpentier, and Bobby Crane .  Only $5 – no bar is too far.