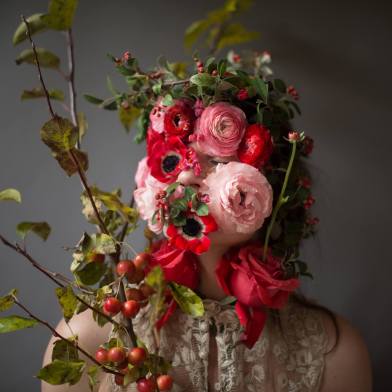 Welp, I am back in Denver – happy new year bitches.  I just spent 8 days between Philadelphia and New York City and overall I can say it was really fun…before it wasn’t fun anymore.  I should have taken my own advice when it came to New Year’s Eve, cuz unfortunately I must admit that 2013 ended in an epic ball of flames.

However.  I have successfully made it through to the other side, but not without a few last-minute life lessons that 2013 wanted to violently shove in my face.

Long story short, I will be starting 2014 by taking a bit of a break from the sauce, and by focusing on some healthier activities as the new year begins. Mazel tov.

BUT.  I hope that everyone else had gobs of fun and did not wake up on January 1st shrouded in shame.  And if that’s the case, and you are feeling good, here’s a handful of stuffs to do this week, xoxo.

A man (Sharlto Copley from District 9, Elysium) wakes up in a pit of dead bodies with no memory of who he is or how he got there. Fleeing the scene, he breaks into a nearby house and is met at gunpoint by a group of terrified strangers, all suffering from memory loss. Suspicion gives way to violence as the group starts to piece together clues about their identities, but when they uncover a threat that’s more vicious — and hungry — than each other, they are forced to figure out what brought them all together — before it’s too late.  This film is playing for two nights only!  9:30pm both nights; tickets run $7 – $10.

Pulling from two of the biggest art genres, portraits and floral still lives, Kristen Hatgi Sink meshes the two together to create some uniquely beautiful and sometimes uneasy imagery.  The images don’t show the likeness of the person like a traditional portrait would show off someone’s features, but despite the significant floral coverage, the individuals are still uniquely beautiful.  FREE.

Come on down to YOUR community access television station for an intimate, live studio performance with Far Off Coast.  Enjoy great food sponsored by Illegal Pete’s, as well as adult beverages.  This is one of Denver’s most unique venues.  Best of all, this ish is free – come check it out! 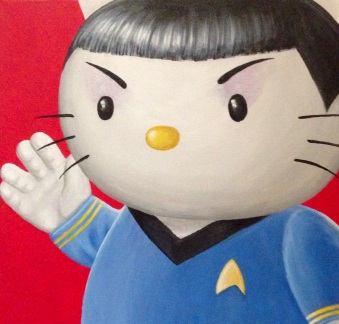 You’ve already hit up a handful of First Friday events and are just buzzed up enough to start dancing…now what?   Cue Guilty Pleasures – a party dedicated to cheesy awesome dance jams.  When in doubt, grind it out.  $5 (strongly) suggested donation.

On the first Saturday of every month, you can enjoy the Denver Art Museums’s collections and non-ticketed exhibitions without spending a dime!  A collection highlights tour in Spanish is offered at 2 pm.  Free general admission tickets are available on-site starting at 10 am.  Please note: the current Passport to Paris exhibit does require an additional special exhibition ticket.

Come on in to Pizza Fusion this Saturday and buy any size pizza and get a FREE pizza of equal or lesser value!  Free rhymes with me!  Pizza Fusion offers a wide-selection of omnivorous, vegetarian, and vegan options untainted by artificial additives, preservatives, growth hormones, pesticides, nitrates and trans fats.  Additionally, you’ll be supporting this big-hearted restaurant, which also serves as a job training site for transitioning homeless individuals.

This Saturday starting at 3pm, Saint Patrick’s Brewery will be hosting a taproom ping pong tournament. Top finishers will receive Saint Patrick’s swag.  Also on Saturday, they will be releasing their Centennial State Lager, a Czech-style lager that’s highly sessionable.  The brewery will be open from 2pm – 9pm. 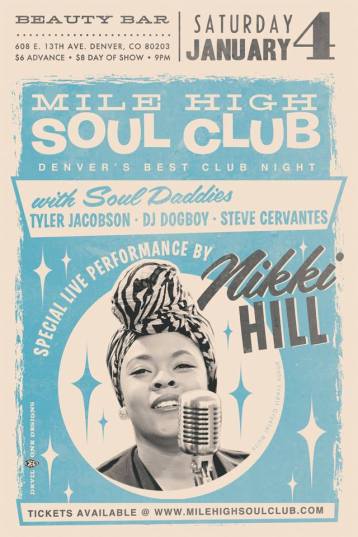 Soul, Funk, pre-1975 curated by some of the hippest cats in town and always an absolute packed house.  Plus!  This month includes a special live performance by Nikki Hill!  $6 in advance; $8 day of show.

Come nosh on some tasty eats at the Squeaky Bean, and try your luck at the ‘go.  Each week features a different comic, with this week’s host being the very funny Sam Tallent!  Make your reservation today.

“Last year, we collected more than 18,000 trees from Denver residents,” says Karen Hultgren, spokeswoman for Denver Recycles. “A lot of communities will offer drop-off sites, so you have to tie the tree on top of your car and take it someplace to drop it off, but here in Denver we’re unique, because we do residential pickup.”  That’s part of the Treecycle program, whereby trees are picked up and turned into mulch (available for free during the annual mulch giveaway in the springtime).  Depending on what trash service is provided, Denver residents should strip their trees of decorations and stands and set them out today (for residents with dumpster service) or on their regular trash day (for manual and barrel customers).  A special truck will stop by to pick up the trees, keeping them separated from the trash.  Treecycle starts today and runs through January 17; for more information, visit the Treecycle site.

The Narrative Scriptwriting class walks students through the process of scriptwriting.  Students are taught basic story-telling and dramatic principles, writing a treatment, scene structure, different avenues and genres, and writing a script.  The Narrative Scriptwriting class also introduces students to Celtx, a free program that can be used for scriptwriting, storyboarding, shotlists, and production budgets. Students are not required to have production or scriptwriting experience to take this class.  Class fees are $110 for members and $150 for non-members.  Start your new year’s hobby, yo!

Looking for a way to detox from all of the holiday indulgence?  Every first Tuesday of the month, Root Down offers a gourmet 4-course raw vegan dinner for $39/person.  Please call ahead for reservations and mention if you are coming for the Raw Food Menu, as seating is limited.  Peep this month’s menu here – yum

Enjoy classic horror flicks inside the bike-themed interior of Crash 45, along with movie-themed drink specials, and fun souvenirs to take home!  All films start around 7:30pm, but come earlier for a seat and/or to order food.  This month’s film is Creepshow (1982) – Five tales of terror inspired by the EC Comics of the 1950’s, written by Stephen King & directed by George Romero…perhaps the greatest horror anthology of all time.

Generation Iron examines the professional sport of bodybuilding today and gives the audience front row access to the lives of the stars of today’s international bodybuilding arena.  Each of the athletes has a story to tell of their life, journey, aspiration, and motivation. They have been through ups and downs, overcoming the toughest judges in the world as they’ve entered the stages around the world and flexed their muscles for eager fans.  Outside of the gym and the brutal training, the cameras chronicle the iron men through their most intimate moments in life as they prepare for the mental challenges that lay ahead.  Tickets run $12 – $15; special guests in-person! 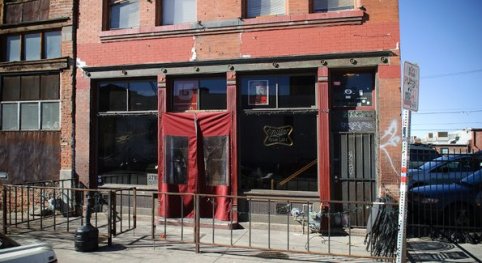 This weekly show presents a mashup of local and visiting comics, all for FREE!  And this week, come help the gents celebrate their third year anniversary!  “We don’t want to overhype the show,” says founding member Chris Charpentier, “but it’s going to be bigger than Lillith Fair and Burning Man combined! We’re going to have a bunch of our favorite Denver comics and a top-notch headliner.”  BOOM.

I am almost hesitant to promote this one, as it reduces my chances of winning.  However, each week the Larimer Lounge bingos off a number of great concerts in town.  Peep the site to see which tickets are available.  Doors open at 4pm, bingo starts at 6pm.  $1.50 PBRs, $2 wells, $3.50 you call its, and it’s FREE to play!