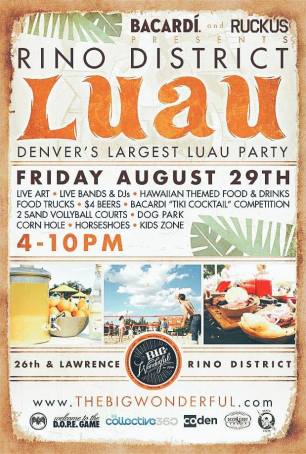 Denver, can you feel it?  Fall is in the air.  Soon we will be trading our tank tops, sunscreen, and patio beers for flannel, scarves, and hot toddies.  But until that happens, let’s squeeze the last remaining drops from this season, shall we?

I am so ready for the holiday weekend that I think I would seriously be content just hanging out in a dumpster.  But in lieu of that, here’s a bunch of fun stuff that is happening, including a Friday night luau, a fundraiser to support Denver’s female biking community, a tribute to Amy Winehouse, farmers markets galore, comedy, pop-up shops, a vegan community dinner, and much more!

(And as per youzh, check-out Westword’s 10 things to do for $10 in Denver blog for free/low-cost events this weekend, including the Taste of Colorado.)

Come on out to help the Denver She Devils get to Minneapolis for the largest all women’s/trans/femme race in the nation – Babes in Bikeland.  Proceeds from this event will also go toward classes, open shop nights, and more to help get women more involved in the Denver biking community.  Starting at 7 pm, the She Devils will be auctioning and raffling off items from their incredible sponsors including: Timbuktu, Renegade, Polar Bottle, Primal, Prost, Denver Bicycle Cafe, CoCo Bikes, and many more!  Come join them for some beverages, fun, and amazing prizes!  FREE entry.

Have you been missing Amy Winehouse?  Well come on out to the Oriental to see the embodiment of this sultry singer.  Only $6 and you get all of the hits.  Alpha Schoolmarm Orchestra opens.

Haunting and beautiful, just like your grandma.  Tickets are $12; the memories are free.

This Saturday, TheBigWonderful will be teaming up with Imbibe to celebrate the end of passport season in Denver.  Hope you got all of the stamps you needed, cuz the summer is officially over.  Come say goodbye in Denver’s newest pop-up food festival/farmers market/craft beer tasting/urban farm and enjoy a free beer when you RSVP.  Admission is FREE – party on, Wayne.

Come by Nooch | Vegan Market on August 30th and grab a selection of fresh local/organic produce curated by their friends at Denver Urban Gardens!  There will also be samples from Bytmee Cold Brews, Nova Monda Cacao & Chocolate, and BLovely Vegan Baked Goods, LLC! 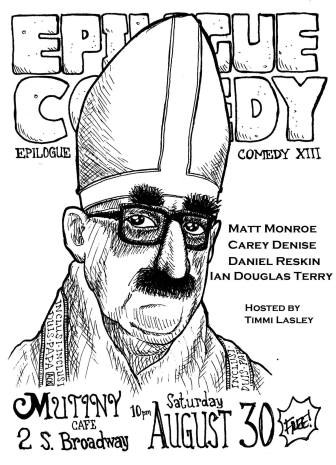 Come on out for Lucha Rama’s 4-year anniversary party, complete with DJs, jello wrestling, luchadores, a photobooth, and PBR swag giveaways!  Your hosts for the evening are Sid Pink and Tiffany Rose.  FREE until 10pm; FREE PBR from 9 -10pm.

This Saturday, Channel Z will be presenting Near Dark at the Alamo Drafthouse Denver, a film in which a young man reluctantly joins a travelling “family” of evil vampires, when the girl he’d tried to seduce is part of that group.  Fun!  Hosted and curated by Keith Garcia & Theresa Mercado.  Tickets are $11.

Take a break from smashing PBRs with the bros and pop into Mutiny Information Cafe this Saturday night to grab a latte, hear some jokes, and peruse some vinyl.  This month’s comics include Matt Monroe, Carey Denise, Daniel Reskin, Ian Douglas Terry, and hosting services by Timmi Lasley.  Come early to grab a seat as shit gets real, real quick!  FREE.

Urban beach party featuring two DJs, 10,000 square feet of sand, a giant swimming pool, drink specials, and awesome schwag.  $5 cover; $9 bottomless mimosas from 1 – 4pm.  Get your vitamin C on, son – this is the last beach club of the summer!

Movies and booze.  Come watch A Fish Called Wanda on the big screen, while enjoying carefully crafted themed cocktails, which include Stuttering Bastard, Fish House Punch, and Speak Italian to Me.  Tickets are $10.75.

FREE comedy show on the last Sunday of every month, featuring local and national talent in the coolest comedy club setting you’ve probably ever been to.  Pick-up a FREE Sexy Pizza slice card on your way out and end your night with some of the most delicious East Coast-style pizza in Denver.  This month’s comics include Ian Douglas Terry, Kristin Rand, Zach Reinert, Aaron Urist, and headliner Troy Walker!  Hosting services provided by Matt Monroe.  Plus, enjoy FREE street parking on Sundays!

Listen up!  If you are a fan of Cards Against Humanity, then this is a show for you.  This week’s contestants include Hunter Carney, Jason Wesoky, Janae Burris, and Greg Baumhauer.  Audience members win prizes by submitting questions that the contestants will answer during the show.  Prizes this week include free Sexy Pizza gift cards, 420 prizes (with a 21+ ID), free drinks, awful literature, and more!  Doors open at 7:30pm; YOU MUST ARRIVE EARLY TO WIN PRIZES!  No work on Monday means an extra raunchy Sunday.  FREE.

Have a case of the Mondays?  Well dance it out to some 90s hip-hop, featuring everything from Tupac to the Wu.  Feel free to dress in your finest 90’s gear.  $2 PBRs all night, that’s tight!  FREE.

Enjoy classic horror flicks under the stars, along with movie-themed drink specials and fun souvenirs to take home!  All films start around 8pm, but come earlier for a seat and/or to order food.  This month’s film is Natural Born Killers: Director’s Cut (1994) – Two victims of traumatized childhoods become lovers and psychopathic serial murderers irresponsibly glorified by the mass media.  FREE.

This hipster-flavored market features organic produce, flowers, local wares, live music, and food trucks.  Come celebrate their second year, which features even MORE vendors than last.  Held on the lawn of the South Broadway Christian Church at 23 Lincoln Street.  Don’t miss out – this is the last one of the summer!

Embrace the cooler weather with an Indian-themed dinner at this month’s Chomp!  For just an $8 – $10 donation, enjoy a heaping plate of delicious vegan food, based on the chosen monthly theme.  This month’s menu will feature aloo gobi (cauliflower and potatoes), dal, yellow rice, veggie pakora, naan, gulab jamun (banana balls), and a lovely iced chai to wash it down #yum  Also, feel free to BYOB.  This monthly community vegan dinner is open to all – you don’t need to be a card-carrying vegan to attend.