JEFF the Brotherhood has some serious rock ‘n’ roll stances

Last night I went and saw Dirty Few, ate a giant slice of pizza at Fat Sully’s while watching my fantasy QB dominate, then headed back to the Bluebird to watch/listen to JEFF the Brotherhood perform some epic psychedelic hair rock.  It was a good night.

And there’s more fun to be had.  In addition to the events below, be sure to check-out Riot Fest, featuring the likes of Slayer, Primus, Weezer, The Cure, The National, and SO much more, as well as Harvest Week, a collection of pop-up foodie parties in an urban garden.

(And as per youzh, check-out Westword’s 10 things to do for $10 in Denver blog for free/low-cost events this weekend, including downtown Denver’s Oktoberfest, the 4th Annual Uptown Block Party & Brewer’s Olympics, and Pugs in the Park)

Cotton Blend is a limited edition, curated T-shirt art show, featuring designs from a slew of talented folks.  Complimentary sweet treats will be provided by Sugar Mill and Jeni’s Ice Cream.  On-site screen printing demo by Indyink.  Proceeds from the show will be donated to DAVA, a non-profit that provides free after-school and summer art classes for Denver-area kids who don’t have art in their schools.  FREE.

It’s a cornucopia of goodness happening around town and new shop on the block, The Craftsman & Apprentice, want to help you embrace it…celebrate the changing of the seasons with them at their new San Rafael shop!  Cocktails from Puff’s Preserves, food from Kassia’s Pasta Farm, LLC, mobile photo booth by Picture Me Camping, and adventure photography from Daniel Luke Holton.  Plus the work of their featured artisan & bowyer, Tony Deland, will be on view, along with a carefully selected line-up of artisan & vintage treasures.  (They’ll even let you shoot a bow if you ask real nice.)  Everyone is welcome at this FREE event!  Come check out this new spot y’all.

Head to Galvanize for the grand finale of Denver Startup Week.  They’re shutting down the street once again, bringing in MORE delicious food and Denver brews, as well as some good old-fashioned games.  Over 600 people attended this party last year – don’t miss out ton this giant entrepreneurial bash!  FREE.

The Dikeou Collection’s eighth installment of the Fresh Jazz and Crisp Vinyl Series will feature a very special performance by The Josh Trinidad Trio.  Dave Ashton, Program Manager for KGNU Denver 88.5 FM and member of local hip-hop group Council of Word, is the guest DJ and will spin rare & classic records from the Collection’s extensive vinyl archive.  Trinidad and his band will play at 8pm.  This event is FREE and open to the public; light refreshments will be provided. 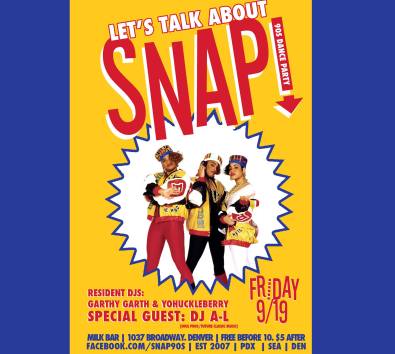 Come on out for the release party of zine issue #4 by Suspect Press.  Music from PrettyMouth, Accordion Crimes, Joy Subtraction, and Veronica.  Readings by Ken Arkind, Sam Tallent, and Dan Landes.  $6 cover for a whole buncha fun.

Roll is a monthly-themed roller skating party in the EXDO Event Center, complete with skate rental, mind-blowing audio and visuals, and of course, sippy cup drinks for one helluva party!  Tonight’s theme is Homecoming…a night filled with awkward dates, high school pep, having your dad drop you off (aka Uber), roller skating, drinking, dancing, karaoke, and ping-pong!  FREE admission between 9 – 10pm and $5 afterwards. (Or click here for a FREE pre-sale ticket that includes skate rental.)  $2 wells between 9 – 10pm.  This event is 21+; sign your waiver ahead of time and avoid the line!

Come celebrate Wit‘s End Brewing Company’s 3-year anniversary and evolution from nano to microbrewery!  They will be featuring over 13 different beers on tap, including old favorites and some awesome new concoctions.  There will be raffles throughout the day for schwag, beer, and a set of the coveted Saturday afternoon GABF tickets!  Also onsite will be the Pride of Philly Cheesesteaks and Bakin’ Bakery Food Truck!  FREE.

Bring the family out for traditional Oktoberfest activities for the whole family until dark!  Then the grown-up party continues until 2am!  Fun giveaways, yard games, contests, great fresh Bavarian food, beer and wine specials all day!  Bring your own stein and they will fill it for $5!  There will also be steins for sale.  Wear your best festive gear and you could win great prizes!

After 21 months of hustle and grit OMF will pause to reflect on the evolution of their brewery, their team, the Denver community, and their Colorado partners.  This will be done through an event that they are simply calling, Gratitude.  Throughout the day there will be special tappings, food trucks, live music, and merch giveaways.  All draft pours of all beers will be a mere $3 open to close, and a release of 200 bottles of their red wine barrel-aged Dark Sour Ale will be available for purchase until they’re gone.  Gratitude will also be the first opportunity to enjoy the Tenth Acre, the new garden space next to the brewery.  Starting next season, the Tenth Acre will produce hops, fruits, and vegetables for use in their beers.  Come help them celebrate this milestone – cheers!  FREE entry.

The annual fundraiser for Rocky Mountain Feline Rescue, a Denver cage-free, no-kill cat shelter.  This event features a selection of Colorado wines produced at the winery, a wide choice of appetizers and small plates, live music, dancing, and a silent auction.  Tickets cost $45 in advance, $50 at the door.  Meow!

Denver’s coolest party just got even colder!  So What! the Club has been throwing down the coolest sounds of jazzy hip-hop, house, and future beats for over 3 years at Beauty Bar.  Now they’ve added the one thing that can make the party ice cold: FREE ice cream!  Doors at 8pm, FREE before 10pm/$5 afterwards.  Get down witcha bad self.

Come and enjoy craft beers, cocktails, and lawn games before heading over to the Rockies game.  Your $20 ticket includes drinks, a ticket to the game, sunshine, friends, and laughter.  And the best part?  All of this imbibing and baseball is for a good cause: The Leukemia & Lymphoma Society (LLS), the world’s largest voluntary (nonprofit) health organization dedicated to funding blood cancer research and providing education and patient services.  A food truck will also be onsite to save you from stadium food.

Give the middle finger to Monday and come out for some quality laughs and some quality brews.  Debates this month include Please vs. Thank You, Mickey Mouse vs. Bugs Bunny, CIA vs. MIA, Peaks vs. Valleys, and the headlining debate, Liberty vs Death.  FREE.

A documentary film of the groundbreaking David Bowie exhibition created by the Victoria and Albert Museum, London. Described by The Times as “stylish & outrageous” and The Guardian as “a triumph”, the exhibition features a remarkable collection of photographs, stage costumes, and other rare possessions from the David Bowie Archive.  Peep the film and then book your trip to Chicago to see the exhibit at the Museum of Contemporary Art.  Tickets run $10 – $12.

David wants you to come see his movie

On the evening of September 25th, join City Build Denver for a pop-up family-style dinner with 200 Denverites who share an interest in city building and re-invigorating unused public space.  Tickets are $25; food, beverage, education, and entertainment are included.  Come eat, meet, and connect with 200 of your closest friends.  The more the merrier – everyone you know!

Word on the street is that Makin’ Fun is one of the best new comedy shows you may or may not have been to.  The premise is simple: Local and visiting comedians go onstage for five minutes to perform.  During their performance, audience members text in comments/observations/random thoughts that scroll behind the comic during their set.  The comic can choose to look or not look and incorporate the material if they would like.  The show creates a hilarious dialogue between the comic and the audience, without heckling out loud.  And the best part?  This ish is FREE.  Every last Thursday of the month; come check it out!

Weird Touch is the new dance party collaboration between renowned DJs Tyler Snow, Fancy Matthew, and Shannon von Kelly.  After a successful 8-month run with the Backroom Sessions at Adrift Tiki Bar, the trio began plotting a next-level expansion of their endeavors to evoke past legendary parties such as Disco Nouveau, Analog Space, Night Drive and Neon Knights.  “Over the last year, we’ve been testing the waters of Denver’s dance appetite.  Apparently, what’s turning us on musically is what’s turning on lots of other Denverites.”  Expect an eclectic, yet cohesive mix of darkly-tinged nu-disco, indie dance, and weird house.  Weird Touch will continue Snow, Kelly, and Brown’s commitment to all-vinyl dj sets  with a greater emphasis on bringing guest talent into the mix.  Only 3 bucks people.  Expect to dance dance dance.