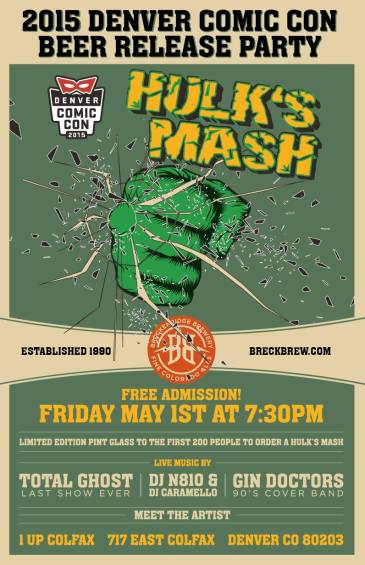 Denver!  What happened this week?  I feel like I got bonked on the head somewhere around Tuesday and when I came to, it was TGIF.  Busy week, y’all.

A couple of announcements: If you are looking to get out of town this weekend, check-out the Stanley Film Festival happening at The Stanley Hotel in Estes Park through Sunday.  You can read a couple of previews that I wrote here and here.

Also, don’t forget to turn in your ballots by Tuesday, May 5th for the 2015 Municipal General Election, and check-out the Bike Your Ballot event being held at The Denver Bicycle Cafe down below.

And lastly, this week Denver’s favorite summer lunch tradition returns – Civic Center Eats!  Delicious food, fresh air, gorgeous views, live music, and a great cause.  Attendees not only get to enjoy Denver’s robust gourmet food truck scene in a beautiful setting, but a portion of the proceeds also benefits the Civic Center Conservancy, the nonprofit dedicated to restoring, enhancing, and activating downtown Denver’s historic Civic Center Park.  Shaded tables and an on-site ATM will be available.  Civic Center Eats takes place every Tuesday and Thursday through Oct 8th from 11am – 2pm, with some exclusions.

(And as per youzh, check-out Westword’s 10 things to do for $10 in Denver blog for free/low-cost events this weekend, including Cinco de Mayo Festival at Civic Center Park and the Morrison Alley Fest in the town of Morrison.)

The Denver Tool Library is celebrating its first First Friday with an elegant open house to showcase its newly established shop.  Socialize with fellow tool enthusiasts, dine on their candlelit back patio, and play a round of Kubb, Beersbee, or Cornhole while listening to jazz and consuming h’orderves and spirits.  After the formal festivities, switch to your jiving shoes and cut loose to music videos projected on an outdoor screen!  FREE and fun!

Join Fancy Tiger for the opening reception of this two-month long exhibition of new embroidered works by Allison Sheldon entitled, This Cruel Fate.  Allison Sheldon is a recent graduate of Colorado State University’s Fiber Arts program.   This Cruel Fate focuses on the dichotomies between man and beast, life and death, the natural and the supernatural.  The opening reception for this exhibit will be held this Friday and will be on view through Friday, May 1st.  FREE.

From the folks that brought you TheBigWonderful (which is also kicking off this weekend) comes the Friday Night Bazaar.  And if you haven’t been, you are seriously missing out.  Imagine a festive farmhouse (at least that’s how it feels to me), filled with twinkling lights, delicious homemade food, craft beer and cocktails, artisan vendors, soulful music, swing dancing, and a food truck garden.  Come shop, sip, and eat.  No cover and a great way to start your weekend!

For their first show in the new space, Lowbrow is excited to present, Family Vacation…UGHHH, featuring the amazing mini-dioramas of becky’s buttons.  There will also be exciting raffles and give-aways throughout the night.  Plus dranks.  FREE.

For the fourth year in a row, Breckenridge Brewery has teamed up with Denver Comic Con to craft a super beer for the masses.  The fan-voted name of “Hulk’s Mash“, the official 2015 Denver Comic Con beer, will be unveiled this Friday at The 1up – Colfax.  This kickoff party will also feature performances by Total Ghost (last show ever!), Gin Doctors, Dj Caramello, and n810.  The first 200 fans to arrive will receive one of the limited edition pint glasses.  FREE.

Beautiful babies of Denver!  Come dance it out at Denver’s favorite indie rock dance night (at their new location), featuring Hollow and DJ Tower.  This is the only event where you can lose it to Neil Diamond, Bloc Party, Queen, The Supremes, Iggy Pop, and LCD Soundsystem all in one night.  This event will also serve as the official after-party for Lowbrow’s Grand Re-Opening, located a few blocks north on Broadway.  Free before 10pm, only $5 afterwards.  Life is short; go to Lipgloss.

Denver!  You’ve already hit up a handful of First Friday events and are just buzzed up enough to start dancing…now what?  Cue Guilty Pleasures – a party dedicated to cheesy awesome dance jams.  (If you haven’t been before, this party is FUN.)  When in doubt, grind it out.  $5 suggested donation.

Come and purchase some delicious baked goods at Colorado’s only all-vegan market!  All proceeds from the bake sale will benefit Food Empowerment Project.  Don’t fear the vegans!

The Dikeou Family Workshops are a great way for people of all ages to learn more about contemporary art and experiment with new creative processes.  This month’s workshop will focus on British artist Simon Periton’s paper cutouts, as featured at the Dikeou Collection and in zingmagazine.  This workshop is FREE to attend and no RSVP is required; drop-in anytime to participate.  Light refreshments will be provided.

It’s back!  This Saturday, TheBigWonderful returns to bring you another season of live music, local food, craft beer + cocktails, beach volleyball, yard games, and even a play areas for the kiddos.  And this year, it is bigger and better – 100+ vendors will be on-site for opening day!  Admission is FREE and it’s the perfect place to meet-up with friends/family for a casually fun Saturday.  And!  In honor of the Kentucky Derby, this inaugural week will be derby-themed with a whole slew of local bluegrass bands.

Join Children’s Future for a screening of the documentary Finding Home, the story of three young Cambodian women overcoming the trauma of human trafficking.  Entry is free but donations are encouraged.  All proceeds will go directly to programs in Cambodia.

After a residency that lasted just shy of 2 years at Beauty Bar, Denver’s Mile High Soul Club has moved down South to Syntax Physic Opera for an even classier experience.  DJs Tyler Jacobson and Steve Cervantes will be your hosts, playing love music for your ear holes.  Get your dancing shoes ready and come shake what your mama gave you.  Only 3 bucks!

Ever wake-up from a monster nap on a Saturday night and think, oh great now what?  This FREE comedy showcase takes place every Saturday at midnight in the basement of 3 King’s Tavern and delivers some of the best local talent that Denver has to offer.  Hosted by Eric Henderson and Cory Helie.  FREE.

Sample some cheese and meet the new baby goats at this animal rescue farm just 15-minutes from downtown Denver.  A little cheese, a lot of goats, and tons of love.  FREE.

This is German filmmaker, Wim Wenders, at his best.  It’s a film of wandering, searching, and landscape as a man (Harry Dean Stanton) meanders through the American West, through literal desert and the spiritual/emotional desert of Los Angeles, trying to find his son and his wife and hoping he can somehow reassemble their fragmented family.  Like much of Wenders’ work, Paris, Texas takes its time; its own fragments come together slowly – and brilliantly.  Tickets to this classic film are only $1!  Hosted by Denver film critic Howie Movshovitz.

Sunday, May 3, 2015 @ 4pm: Citizenfour at the Posner Center for International Development

In honor of World Press Freedom Day, join Africa Agenda and the Colorado International Media and Communication Network (CIMCN) to recognize the contributions of journalists and bloggers from around the world.  They’ll have a screening of Citizenfour, with commentary from Karen Mulberry of the Internet Society, and Dr. Derigan Silver, media law expert of the University of Denver.  A donation of $10 to Africa Agenda is suggested.

Enjoy an all-you-can-eat vegan pizza and pasta buffet!  Additionally, learn the art of making your own vegan pizza crust, receive recipes and how-to handouts, and win free door prizes!  You do NOT need to be a card-carrying vegan to attend.  $20 for all-you-can-eat ($6 for kids 6 – 12 and free for children under the age of 6); all proceeds benefit VegFest Colorado.  Secure your spot here.

Got a case of the Mondays?  A FREE all-levels vinyasa yoga class on the Great Lawn of Civic Center Park may just be what the doctor ordered.  Open your heart, unlock your emotional hips, and get the blood moving through every fiber of your body as you mentally prepare for the rest of your week.  This class is typically held every Monday evening with some exceptions; please bring your own yoga mat.  FREE.

For the month of May, City O’ City will be displaying bicycle-inspired art on their walls.  Graphic artist Alan Peters and upcycle-designer Nibaldo Urzua will both be displaying their work, along with their appreciation of bikes.  Come on out for the opening this Monday to have a drink and meet the artists.  No cover.

Bring your crochet, knitting, embroidery, or just about anything else you’d like to work on – it will be a night of craftin’, snackin’, and sippin’, all with a Cinco de Mayo theme.  Instructors will be available to help you work through any crochet problems you’re having.  FREE and open to all.

Turin Bicycles and Gociety have come together once again to bring you another party you don’t want to miss out on!  Try a taste of Turin Rooster Limited Release beer from Lowdown Brewery + Kitchen and your chance at winning lots of prizes, including a grand prize bike giveaway.  All proceeds go to support COMBA.  No cover.

Adam Cayton-Holland will be performing at Ratio Beerworks

A mega-chill FREE comedy night collaboration between Ratio Beerworks, comedian Ian Douglas Terry, and Damian Burford, host of the Mostly Harmless Podcast.  Some of Denver’s finest comics and some of Denver’s finest beers hosted by IDT.  Come out, have a laugh, and party hard.  This kickoff show will be headlined by Denver’s (and TruTV’s) own, Adam Cayton-Holland!  Additional comedians include Matt Monroe, Kira Blaus-Plissner, Joshua Skillman, Andrew Bueno, and Miriam Moreno.  FREE.

The latest addition to the TAXI campus, the Drive 2 building, is complete and full of amazing companies.  Come celebrate and meet all the new tenants in the building.  Tenants will have open doors with surprises in each office from free food, drinks, games, music, and more.  Roam the halls and get to know more about the companies and their projects.  Then head to the TAXI event space on the 4th floor for music from Beatport, drinks, and great views of downtown.  FREE.

One night only with director Andrea Sedlácková in person!  Set in Czechoslovakia in the 1980s, young and talented sprinter Anna is selected for the national team and starts training to qualify for the Olympic Games.  As a part of the preparation she is placed in a secret “medical program”, where they begin doping her with anabolic steroids.  Her performance improves, but after she collapses at training, she learns the truth.  Anna decides to continue her training without the steroids even though her mother is worried that she won’t be able to keep up with other athletes and might not qualify for the Olympics, which she sees as the only chance for her daughter to escape from behind the Iron Curtain.  Tickets run $10 – $12; FREE reception to follow screening.

Party people of Denver!  Come dance it out with DJs Maladjusted and Caramello at their new home at the Goosetown Tavern.  Kitchen open until midnight; drink specials all night.  No cover.