Tonight I will be attending my nephew’s pre-school graduation (#party) and tomorrow I will be getting sucked into a vortex of beer, sunshine (hopefully), good music, Instagramming, and blah blah blahing at Great Divide’s 21st Anniversary Party.  Apparently it’s all sold-out so if you don’t have tickets, you’re gonna miss out on me tryna start a fight with a porta-potty #cheers

(And as per youzh, check-out Westword’s 10 things to do for $10 in Denver blog for free/low-cost events this weekend, including Sexpot Comedy Presents: Ben Kronberg at The Oriental Theater, A Taste of Puerto Rico at Civic Center Park and National Get Outdoors Day at City Park.)

A $10 entrance fee gets you access to free beer, free cocktails, food, pool times, Weird Touch DJ set, napkins, unicorns, and magic. [In the event of rain, this party will be moved indoors.]

B-Side Music Fridays is a live music series where guests can enjoy an intimate performance by Denver’s top indie musicians, while sipping on crafted cocktails and taking in some of the sweetest views in town.  Tonight’s performer is the lovely Esmé Patterson.  Happy hour from 5 – 7pm; live performance from 6 – 8pm.  Free for MCA members; $5 for regular people.

Do you speak Spanish or kind of speak Spanish?  Have you been looking for an opportunity to practice?  Then dust off those tildas and head on over to Hooked on Colfax this Friday night to have some drinks, roll your Rs, and make some new amigos.  Como se dice, “You are the wind beneath my wings”?  FREE.

Looking for a unique night out?  Exhibit M delivers a sassy portrayal of fantasies in a visual delight.  A little naughty and a lot of fun, Exhibit M features an incredible cast of Denver singers, poets and dancers.  High-energy and super-steamy numbers are set to top songs in a variety of genres, perfect for both a male and female audiences.  Tickets start at $35 and include an after-party with the cast, starting at 11pm.

All films are shown on the lawn in front of the theatre.  Gate opens at 7pm with live music and the film starts at 8:30pm.  Sandwiches for purchase provided by Heidi’s Deli.  Admission is $5/person suggested donation and children 6 and under are free.  This event is rain or shine so dress accordingly.

Denver’s finest all-vinyl dance party is back!  Soul, funk, R&B, psych, invasion, girl groups, and other songs that will make you shake, all brought to you by DJ Rett Rogers, DJ Scuba Scott Beck, and some special guests.  Entry is $5.

Get sweaty this June at Roll’s Tarzan & Jane skating party!  They’ll be taking you on a journey through the jungle with funky beats, power ballads, and stellar cocktails.  So jump on your closest tree branch, lace up them skates, and swing on down to Roll for a night filled with skating, drinking, dancing, karaoke, and ping-pong!  FREE admission between 9 – 10pm and $5 afterwards (or get advance tickets, which include skate rental).  This event is 21+; sign your waiver ahead of time and avoid the line!

You’ve played drinking games at home, now play them with the Denver Film Society!  They’ll give you the rules and thanks to Breckenridge Brewery, the first 50 guests get their first drink on the house!  Drink specials run all night long, with a bar in the theater so you won’t miss a second of the movie (thank god).  Tickets run $7 – $11.  Please drink and watch responsibly; only guests 21 and over will be allowed to attend Films on Tap screenings.

Le Jardin Secret is not your average summer market.  At this French-inspired chefs’ market, foodies can shop for dairy, meat, bread, produce, and other goods – all with a mimosa in hand.  Free parking is available on the top levels of the Larimer Square Garage (14th and Market Streets) during market hours to the first 40 customers.  Customers must ask for a validation pass from the Mile High Business Alliance representative at the Le Jardin Secret welcome booth.  FREE.

It’s back!  TheBigWonderful returns to bring you another season of live music, local food, craft beer + cocktails, beach volleyball, yard games, and even a play areas for the kiddos.  And this year, it is bigger and better!  Admission is FREE and it’s the perfect place to meet-up with friends/family for a casually fun Saturday.  View the musical line-up here.

Please join the Illegal Pete’s folks as they celebrate the 2nd anniversary of their South Broadway location with food, music, and booze.  New Belgium Brewing and Dulce Vida Tequila will also be on-site to support the revelry.  No cover.

Ice cream, live music, dance lessons, and you.  Tonight’s live music will be provided by Andrew Vogt.  Free swing dance lesson at 7pm for those who wish to learn the basic steps; no partner or experience required.  FREE.

Ever wake-up from a monster nap on a Saturday night and think, oh great now what?  This FREE comedy showcase takes place every Saturday at midnight in the basement of 3 King’s Tavern and delivers some of the best local talent that Denver has to offer.  Hosted by Eric Henderson and Cory Helie.  FREE.

Balance on your mat, then get tipsy at the bar.  Class costs $15 and includes one brew.  All participants will receive $1 off each additional beer.  Please bring your own yoga mat and towel.

Sample some cheese and meet the new baby goats at this animal rescue farm, located just 15-minutes from downtown Denver.  A little cheese, a lot of goats, and tons of love.  FREE.  [This event is contingent on the weather, so do check the link for updates.] 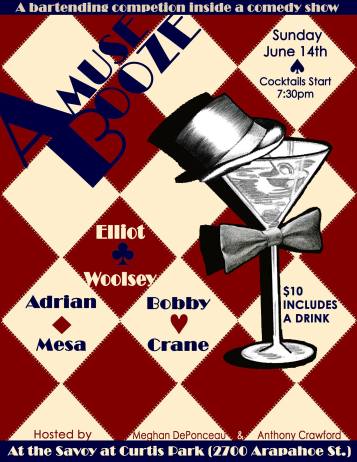 Amuse Booze is a new monthly comedy showcase that appreciates a good, hand-crafted cocktail.  Three local bartenders will compete to make their own variations of three comics favorite cocktails.  One bartender will be named victorious and move forward in the competition whilst the audience enjoys tasting and laughing at the results.  Tonight’s comedians include Bobby Crane, Adrian P. Mesa, and headliner, Elliot Woolsey.  Hosted by Meghan DePonceau and Anthony Crawford.  $10 gets you in the door + one cocktail.

Every month, hosts Theresa Mercado and Ian O’Dougherty will be showing a film by Joel & Ethan Coen (in order of theatrical release), preceded by a short musical selection performed by a local musician celebrating the magnificence, importance, and variety of music from that film.  This week’s show includes musical selections by Poet’s Row and a screening of Fargo.  Come share your zeal and fondness for the brothers with other devotees.  FREE.

When was the last time you watched an outdoor movie in a rugby stadium?  Grab a blanket, pack a picnic, and come on out for another season of free movies under the stars at Infinity Park.  All of the feature movies begin on the jumbo screen at 8pm, with gates opening at 7pm.  FREE.

Eat your heart out through one of Denver’s oldest neighborhoods.  LoDo Bites gives guests the opportunity to try over 20 restaurants.  Grab a bite, have some conversation, and repeat!  This is the perfect way to try new restaurants or see how old favorites have changed over time.  Tickets cost $35.

Kombucha is super good for you and Hannah and Levi from Haiku Foods know all about it.  They’ll take you through the whole brewing process, provide samples of brews in-progress and a variety of tasty flavors to try.  By the end of this workshop, you’ll be a kombucha-making master with your own kombucha kit, including tea, sugar, and culture.  Registration costs $40; drinks & snacks provided.

The Great Debate pits teams of non-experts head-to-head, toe-to-toe, and often dumb-to-dumber in lively debates of the inconsequential.  Mundane topics are brought to life by ordinary, but opinionated folks.  You’re bound to be a flip-flopper after listening to compelling arguments on things that never mattered.  This month’s theme?  Sherlock against Matlock.  Box office opens at 7:30pm, and the feud starts at 8pm.  $5 – $8, depending on your luck, or reserve your spot ahead of time.

Starting May 20th and extending through September 16th, Factotum will be offering special prices during happy hour on all taproom beverages if you bike in on Wednesdays in part of Bike-to-Work Wednesdays.  Pedal power!

Get over the hump-day-slump and enjoy an evening of vinyasa in the BSB backyard, along with your favorite red ales.  $15 gets you in the class PLUS a glass of beer (or Happy Leaf Kombucha) AND a $5 credit to use towards a very delicious vegetarian meal from WongWayVeg!  Please bring your own yoga mat and towel. 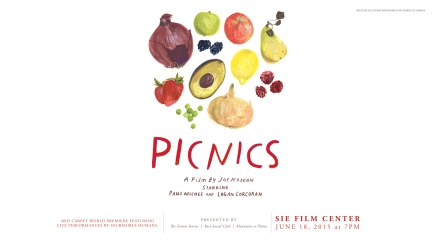 Join the Mutiny Information Cafe every Wednesday night this summer for a FREE movie night hosted by Denver Anarchist Black Cross.  This week’s film is The Take.  FREE.

If you haven’t been to The Narrators before, it is pure gold.  It is essentially like This American Life unfolding right in front of your beautiful smiling face.  One of the best things to do in Denver – hands down.  This month’s theme is “WTF?″.  Admission is FREE, plus there is cheap can beer to sip on while you listen, haaaaaaaaaaay.

This one night extravaganza will include the world-premiere screening of Picnics with the filmmakers/actors in attendance, live music, art show, and complimentary beer provided by Drizly!  Tickets run $10 – $12.

Come on out for the launch of a new series of Denver city guides called, Occasional Guides.  They’re made with love for the occasional explorers of our fair city.  The ones that live here and haven’t found it all or the ones who are visiting and want something a bit more real than scratch-the-surface sightseeing.  This launch will feature the very first guide in the series, Occasional Sandwiches.  Sandwiches will be provided!

A roomful of “grown-ups” sharing their diaries, yearbooks, journals, and notes from when they were younger?  Yes, please!  This is an event you don’t want to miss.  You’ll laugh, cringe, and commiserate that he never did call when he said he would.  Still have access to your old journals?  Visit the site to be a part of the show and share your angst with others!  Tickets are $8 in advance, $10 day of.

Cool Shit is the newest comedy drug that all the cool kids are doing (and that one kid’s dad).  This week’s show will feature a whole slew of local for your enjoyment.  FREE show, cash bar, cool shit.

Party people of Denver!  It’s the 4-year anniversary of Motown Thursdays!  Come dance it out with DJs Maladjusted and Caramello at their new home at the Goosetown Tavern.  Kitchen open until midnight; drink specials all night.  No cover.