Denver, you know the drill: So much to do, so little time; you’ll sleep when you’re dead, YOLO; sun’s out, gun’s out; you gotta fight for your right to party; pass the uppers; and all of that jazz.

Bunch of fests going on this weekend that you can sink your teeth into or maybe you just want to stay home and blog about soup. Whatever, it’s your journey and I am here to support you no matter what, xoxo.

(In addition to the events below, be sure to check-out the Rocky Mountain Tea Festival and the Jackalope Art & Craft Fair. And as per youzh, check-out Westword’s 10 things to do for $10 in Denver blog for free/low-cost events this weekend, including the Grand Opening Party at Nip & Sip Neighborhood Lounge and The Cheesman Park Art Fest at Cheesman Park.)

This festival promises to present the best of the best in film that covers every aspect of the LGBTQ community, while introducing new visionaries, honoring iconic staples, and telling stories from around the world to connect us all with a common message of identity and understanding. View the schedule and purchase tickets online.

A 3-day music and art festival set amongst the beautiful chaos that is theUnderground Music Showcase. Mile High Parley is a FREE, all-ages event. Visit the Facebook page for the schedule/line-up.

From the Underground Music Showcase (UMS) website, “Like that old friend you only see once a year, The UMS will wreck your house, get you drunk and ultimately save your life in one sweaty blur, leaving you reeling and exhausted and a few days away from wishing it would come back again already.” View the schedule and purchase tickets online.

Do you speak Spanish or kind of speak Spanish? Have you been looking for an opportunity to practice? Then dust off those tildas and head on over to Hooked on Colfax this Friday night to have some drinks, roll your Rs, and make some new amigos. Como se dice, “I am the walrus, goo goo g’ joob”? FREE.

After an incredibly successful inaugural show, the Underground Comedy Showcase is back! And this time, Barry Rothbart will be headlining the laughs. Joining Mr. Rothbart are Jono Zalay, Carey Denise, Brian Hocker, and Andrew Michaan. Hosted by Stephen Agyei & Matt Monroe. Tickets are $10 and will sell-out so buy yours now (or cry later. You big baby).

Denver! Come dance it out at Denver’s favorite indie rock dance night, featuring Hollow, DJ Tower, and special guest, DJ Digg out of Austin. This is the only event where you can lose it to Neil Diamond, Bloc Party, Queen, The Supremes, and LCD Soundsystem all in one night. They’ll be serving up $2 PBRs + $4 vodka/gin drink specials, and giving away tickets to see Empire of the Sun with St. Lucia and Holy Ghost! FREE for those with a UMS wristband; $5 for the plebs. Life is short; go to Lipgloss. 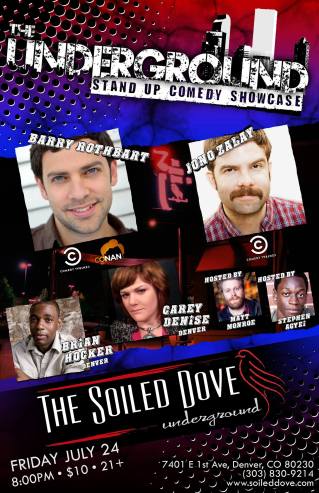 Le Jardin Secret is not your average summer market. At this French-inspired chefs’ market, foodies can shop for dairy, meat, bread, produce, and other goods – all with a mimosa in hand. Free parking is available on the top levels of the Larimer Square Garage (14th and Market Streets) during market hours to the first 40 customers. Customers must ask for a validation pass from the Mile High Business Alliance representative at the Le Jardin Secret welcome booth. FREE.

It’s back! TheBigWonderful returns to bring you another season of live music, local food, craft beer + cocktails, beach volleyball, yard games, and even a play areas for the kiddos. And this year, it is bigger and better! Admission is FREE and it’s the perfect place to meet-up with friends/family for a casually fun Saturday. View the musical line-up here and be one of the first guests to try the new silent disco arena by SoundDown Party.

Get funky on the last Saturday of each month at Grandma’s House, with your host Mara Wiles. This month, enjoy the cracked-out comedic stylings of Nathan Lund, Tim Messenger, Jono Zalay, Mary Byrd, and Meaghan Shaha. There will also be a food truck and musical accompaniment to round out the afternoon of realness. Come get some! No cover.

Ice cream, live music, dance lessons, and you. Tonight’s live music will be provided by Joe Smith and the Spicy Pickles Jazz Band. Free swing dance lesson at 7pm for those who wish to learn the basic steps; no partner or experience required. FREE.

What is Crush City? Each month, comedians Aaron Urist and Jordan Doll assemble an A-Team of comedic superheroes, visionaries, madmen, and crushers from Denver and beyond, to create a magical night of stand-up perfection and comedic destruction. This month’s bonus installment features James Draper, Mara Wiles, Matt Monroe, Jono Zalay, and Barry Rothbart, with Erin Stereo on the ones and twos. Tickets are $7 at the door.

Ditch the limelight, forego the scene, and explore the delightfully dimly lit corners of your city for a special UMS-edition of Weird Touch! Weird Touch is a new(ish) all-vinyl dance party collaboration offering an eclectic, yet cohesive mix of darkly tinged nu-disco, indie dance, and weird house. With DJs Fancy Matthew, Shannon von Kelly, and Tyler Snow, it’s your chance to bump and grind with that hottie you picked up at the main stage. FREE for those with a UMS wristband; $5 for the plebs.

In the spirit of the Tour de France, the local RiNo neighborhood bike shop, Oh, Wheelie? will be offering a pop-up shop just in time for the finale of the race. Come early starting at 8am to watch the race’s conclusion on the big screen and then stick around to check-out Oh, Wheelie?’s offerings from Rivendell and Swobo. The RiNo Yacht Club will also open early and they will be showing the race highlights starting at 2pm. FREE entry.

Get wet at the RiNo Beach Club

Sample some cheese and meet the baby goats at this animal rescue farm, located just 15-minutes from downtown Denver. A little cheese, a lot of goats, and tons of love. FREE.

This summer, end your weekend with a familiar film, $6 cocktails, snacks, and a rad atmosphere. This week’s film is The Goonies. No cover.

FREE comedy show on the last Sunday of every month, featuring local and national talent in the coolest comedy club you’ve probably ever been to. Pick-up a FREE Sexy Pizza slice card on your way out and end your night with some delicious East Coast-style pizza. This month, come help celebrate Propaganda’s three years with 5 headliners! Performers include Barry Rothbart, Jono Zalay, Steve MUDFLAP McGrew, Deacon Gray, and Rick Kerns. Hosting services provided by Matt Monroe. Plus, enjoy FREE street parking on Sundays!

Come celebrate the Pope of Trash on the patio at Fort Greene (previously Crash 45), a beautiful new space that the King of Bad Taste would be happy to drink a martini in or do some poppers at. This week’s film is Female Trouble. FREE and cool.

Unwind after work at Summer on the Plaza, a free outdoor concert series at 1801 California, presented by Arts Brookfield. This week, enjoy the reverb-dripping guitars and boot-stomping train beats of Whiskey Folk, featuring members of The Congress & Robbie Peoples. Concertgoers can also enjoy happy hour specials at Guard and Grace, adjacent to the plaza – a great way to get over the hump. This event is FREE.

Science fiction feeds the imagination and helps us to explore possible futures, our hopes and fears, and the unfolding of technologies. Join scientists from the Denver Museum of Nature & Science and Metropolitan University film professor, Vincent Piturro, as they screen famous sci-fi films and lead discussions to break down the science behind these alternative possibilities. This week’s screening features the classic film, Planet of the Apes. Tickets run $8 – $15.

This Thursday night, come on down to Zephyr’s taproom to enjoy some beer, pizza, and popcorn while watching this neo-classic film. No cover.

Arrrrr you ready for Denver’s poolside party of the summer? CultureHaus cordially invites you to Pirate Disco: A Poolside Cocktail Party at the Four Seasons Hotel Denver. Get ready to walk the plank and cut a rug! Whether you come as a pirate in search of stolen booty, or a disco dancer looking to shake your booty, dress to impress. The full cash bar will feature specialty cocktails by Four Seasons Hotel Denver summer sponsors Veuve Clicquot, Belvedere Vodka, and Red Bull. Enjoy dance music, complimentary appetizers, and photos with friends in the Bamboo Booth. All food and drink will be created by EDGE Restaurant & Bar. Tickets cost $35.

Nerd Nite Denver wraps up its summer season by celebrating some of the best parts of being human: science, toys, and boobs. This month, Amanda explains how your life is actually one big chemical explosion; David talks toys; and Martha explains our relationship to mammalian fun bags — we assume that’s their scientific name. Plus! A percentage of every ticket purchase this month goes to Collectors Care, a non-profit that brings toys to children in need. Tickets are $5 in advance; $8 at the door.

New Belgium Brewing Company is teaming up with REI to bring you a couple of bike-in movies this summer. This week’s screening is Wayne’s World. Canned beer and food truck treats will be available for purchase. Entry is $10 at the door. All ticket and beer sales will benefit BikeDenver. Bring a low back chair or a blanket to sit on. Doors at 6:45pm, live music at 7pm, movie at dusk.

Cool Shit is the newest comedy drug that all the cool kids are doing (and that one kid’s dad). This week’s show will feature a whole slew of local comedians for your enjoyment. FREE show, cash bar, cool shit.

Party people of Denver! Come dance it out with DJs Maladjusted and Caramello at their new home at the Goosetown Tavern. Kitchen open until midnight; drink specials all night. No cover.