I am headed down to Nashville bright and early tomorrow morning with some of my dearest pals. We’re having one last hurrah before we all head back to college (just kidding – we are all pushing 40, but will still probably get college drunk). So that means you are receiving this week’s list of events a whole day early!

A three-day weekend presents an opportunity to really suck the marrow from this bone we call summertime and I invite you to go big. Be safe, wear a helmet, and I’ll look forward to hearing your Tinder tales upon my return, xoxo.

(And as per youzh, check-out Westword’s 10 things to do for $10 in Denver blog for free/low-cost events this weekend, including A Taste of Colorado at Civic Center Park and Gay Vs. Straight: An Epic Battle of Improv at Tracks.)

Fancy Tiger Clothing invites you to join them for an evening of fashion & lifestyle education, in preparation of the upcoming 2015 fall season. Fashion experts from the Fancy Tiger team will be on hand, to assist as you explore new fall-forward fashions. A representative from Craft Distillers will also be on-site to reveal the mystery of mezcal. This will be a four-part tasting where guests can explore the nuances of different mezcals including Mezcalero, Alipus, and more. As they say, “Para todo mal, mezcal, y para todo bien, mezcal”. FREE.

The Historic Elitch Gardens Theatre continues their new indoor classic movie series with a screening of The Miracle Worker. Tickets are $10 and you can read more about the series here.

Start your weekend with some local art by illustrator, sculptor, and creator, Mallory Hart. Her show, Robot Factory, will feature her trademark realistic style that is inspired by the rustic, gritty, industrial side of the natural world. Free dranks for 21+; free high fives for everyone!

Beautiful babies of Denver, how does FREE beer sound! Come dance it out at Denver’s favorite indie rock dance night and enjoy FREE PBR from 9 – 10:30pm (tips still appreciated). Also, be on the dance floor around midnight for your chance to win tickets to Twin Shadow, Eliot Sumner, and CHVRCHES. Only $5 to dance dance dance (and drink FREE beer and win FREE tickets).

Denver! You’ve already hit up a handful of First Friday events and are just buzzed up enough to start dancing…now what? Cue Guilty Pleasures – a party dedicated to cheesy awesome dance jams. (If you haven’t been before, this party is F-U-N.) When in doubt, grind it out. $5 cover; now located at the Hi-Dive.

Looking for a community-driven farmer’s market with a friendly atmosphere and a variety of vendors and activities? Look no further than the Highland Farmer’s Market! This market provides a vibrant mix of fresh/frozen/dry and prepared foods, adult beverages, local artisan vendors, live music, a bounce house for the kids, and periodic specialty-themed days! Bring your own bag(s) if possible! FREE.

This isn’t your mama’s yoga class. Participants will be flowing to the tunes of Hot Water Music and Fugazi to name a few, so come ready to party. Registration costs $15 and includes one brew. Please bring your own yoga mat and towel. 21+

Join Direct Action Everywhere (DxE) for an animal-friendly Labor Day weekend picnic in City Park. Kids, dogs, partners, friends, and lawn games are welcome. Bring a vegan dish to share and your own dish, drink, and utensils. DxE organizers will also be available to talk about how attendees can get involved. This event is FREE and open to everyone, vegans and non-vegans alike.

The Dikeou Family Workshops are a great way for people of all ages to learn more about contemporary art and experiment with new creative processes. This workshop will feature artist Misaki Kawai’s unique handmade dolls. Using a photo of their own faces, participants will create a personalized character inspired by Misaki’s style and process. This workshop takes approximately 1 – 1.5 hours to complete and is FREE to all attendees; drop-in anytime. Light refreshments will be provided.

TheBigWonderful returns to bring you yet another season of live music, local food, craft beer + cocktails, beach volleyball, yard games, and even a play area for the kiddos. And this year, it is bigger and better! Admission is FREE and it is the perfect place to meet-up with friends/family for a casually fun Saturday. View the musical line-up here and be one of the first guests to try the new silent disco arena by SoundDown Party.

Cats are back! Curated, compiled, and edited by the Walker Art Center in Minneapolis, the Internet Cat Video Festival has been lauded by NPR, The New York Times, The Wall Street Journal, and more! This new reel will feature approximately 100 cat videos culled from nominations by the public in the categories of Comedy, Drama, Animated, Musical, Action, Vintage, and Documentary. Only two shows remaining! Tickets run $7 – $11.

Imagine fashion, shopping, bocce ball, margaritas, and delicious food – this is exactly what Babes on Bocce is all about. This mini market, hosted by Fashion Denver, will feature clothing, jewelry + accessories, two fashion shows, and a unique opportunity to have yourself turned into a 3D-customized figurine. The fashion shows will commence at 5pm and 8pm and will feature participating designers, with hair and makeup being done by Flaunt Salon. FREE and open to the public!

Holy smokes, Mile High Soul Club is turning 7! DJs Tyler Jacobson and Steve Cervantes will be your hosts for this soulful celebration, playing the soundtrack to your summer of love. Get your dancing shoes ready and come shake what yo mama gave you. Only 3 bucks!

Saturday, September 5, 2015 @ 9pm: Soul For You Saturday at the Goosetown Tavern

More soul to soothe your soul. Come party this Labor Day weekend with DJ Bossman Vargas and Caramello. No cover all night!

Director Abbas Kiarostami is one of the greatest directors in the world and has helped shape the current reputation of Iranian cinema. Taste of Cherry is a particularly daring effort, about a man trying to find someone to bury him after his own suicide. The film won the Palme d’Or at Cannes in 1997. Hosted by Denver film critic, Howie Movshovitz, tickets to this classic film are only $1!

End your weekend with a familiar film, $6 cocktails, snacks, and a rad atmosphere. This week’s film is the joint-rolling classic, Dazed and Confused. No cover.

Come try your own material (or just listen to others) at this brand-new open mic, hosted by James Xiong and Roger Haak. $3 craft beer tallboys; $2 New Belgium Shift cans. Sign-up at 9pm; show at 9:30pm #LOL 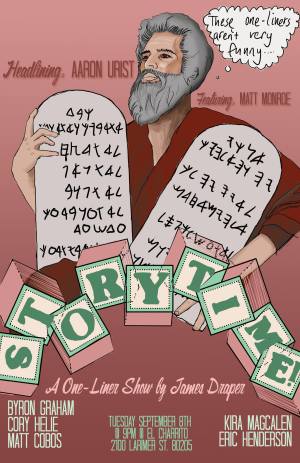 The Denver Public Library is piloting a new sunrise concert series to the city’s early birds – including the city’s homeless. The first concert will feature the crooning duo, Piper Club. Depending on the turnout, the library will schedule more early morning concerts so stop on by and show your support. This event is FREE and open to the public.

Come on out for some farm fresh produce, food, music, bounce house, arts & crafts, and fun for the whole family. FREE.

This new show will be geared towards sober people and their friends (who may or may not be drinkers) and will offer “mocktail” and coffee specials, along with plenty of desserts. The bar will be open for those who wish to purchase alcoholic beverages. All of the comics on the show have some relationship with sobriety, whether it’s a loved one or themselves. The idea and the hope is to show those who choose to stop drinking (for whatever reason), that there are still plenty of laughs to be had. Tickets are $10.

In conjunction with their current art exhibits, the McNichols Building will present an indoor/outdoor/upstairs/downstairs evening devoted to rock, complete with rock covers performed by Grease Pony, a silent disco by SoundDown Party, local bites, a craft beer + wine tasting plus cocktails at the cash bar, tons of games, a high-stakes drawing, and some surprises. Tickets are $20 – $25.

Come on out for some beer, prizes, a “costume garage sale” and a DJ set by Spencer Foreman. RSVP here to double your chances of winning a cruiser bike and more. No cover.

Cool Shit is the newest comedy drug that all the cool kids are doing (and that one kid’s dad). This week’s show will feature a whole slew of local comedians for your enjoyment. FREE show, cash bar, cool shit.

A night of dreamy, gritty, tender-hearted indie pop from three relatively new Denver acts, Strawberry Runners, For Keeps, and Jobless. Strawberry Runners have been on many critic’s short list for bands to see, including at this year’s SXSW. Just one night at Syntax Physic Opera and you could walk away with three new favorite bands. Tickets are $7 at the door.