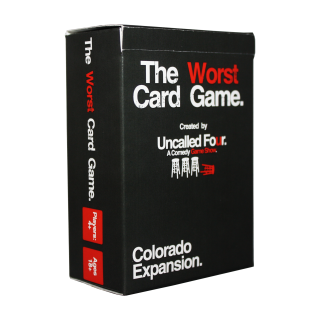 And, one more hilarious gift idea certain to spice up your holiday season is The Worst Card Game, an unaffiliated, Colorado-themed Cards Against Humanity expansion pack. From the twisted minds behind the popular Uncalled Four live comedy game show, this deck collects the most off-color examples from Colorado comedians. Sample question: What should you never add to your homebrew? Sample answers: That unmistakeable Colfax itch; Tour de Fat bottom girls; the unshaved undercarriage of a Boulder trustafarian…

After a successful Kickstarter campaign ($11,356 total), the trope will be celebrating the release of their callous cards at the Oriental Theater on Thursday, December 10 from 8 to 11pm. The show will feature comedians Timmi Lasley, Bobby Crane, Hippieman, and Allen Strickland Williams, with food provided by Wurstküche and a specially brewed beer by Call to Arms Brewing Co.

“They’re the nicest guys and can totally hang with us drinking, which is kind of rare,” related Uncalled Four co-host, Jake Browne, of his beer collaborators.

Browne’s previous brewing experience involved a forgettable though (thankfully) not blinding version of jailhouse juice so the chance to brew with professionals was an obvious enhancement.

“We did an Altbier,” explained Browne. “One of the big things we wanted was something that was not quite a session…but something that people could drink a lot of without passing out halfway through a show.”

The end result – UncAlt Four – will be available at the Oriental party and also at Call to Arms. There will be four slightly tweaked versions, including one with cocoa nibs, caramel, cayenne, and chili peppers, and another with cinnamon and allspice.

Full event details are available here. Fill out a card ahead of time for a chance to win prizes. Ticket options run $7 – $18.

And now for the rest of your week…

Across the state, various businesses will be supporting their favorite local nonprofits as part of Colorado Gives Day. 300 Suns will be donating $1 of every pint of beer (and wine and cider) sold to Safe Shelter of St. Vrain Valley. They’ll also have free appetizers while they last and The Mojito Medicine Show Psychedelic will be playing from 6 – 8pm #idrinkbecauseicare

Head over to the Source to grab some newly released Crooked Stave bottles that will surely please any beer enthusiast on your list. These two Belgian-style dark sour ales will be the only two Motif Reservas released this year. One aged in Leopold Bros. American Small Batch Whiskey barrels and and the other Laws Whiskey House Secale Rye barrels.

Some of the featured ladies in the the 2016 Women of Colorado Craft Breweries Calendar will be at Kokopelli to takeover taps and personalize their months starting at 6 pm. The calendars are $25 and include over $70 in beer coupons. $10 of each calendar sale and half of every tap takeover beer purchased will be donated to the Homeless Veterans Stand Down. There will also be a holiday fair featuring local vendors. Over at Dry Dock you can meet some of the gentlemen gracing the 2016 Colorado Firefighter Calendar starting at 6pm. The calendars are $20, with proceeds supporting Children’s Hospital Colorado. Dry Dock will be tapping a keg of ApriHot, a pepper-infused version of their Apricot Blonde Ale.

The “Randall” was a gizmo devised by Dogfish Head founder, Sam Calagione, to further dry-hop his beers. It is now used to randall everything from fruit to coffee beans. The Delaware brewery asked PorchDrinking.com to come up with three creations employing a radall. Those, along with rare and newly released Dogfish Head brews will be available to attendees. No entry fee.

Spangalang is celebrating the release of three new beers: an English dark mild ale, a cranberry session beer, and a firkin-conditioned batch of the English mild ale. KUVO’s music director, Arturo Gomez, will be on-hand spinning a set of, “fun jazz, soul, funky jazz, finger-poppin-toe-tappin jazz, with some fusion soul to boot.”

Fermaentra is celebrating the release of Machination, their 10% ABV dry-hopped American strong ale, with an all-day extravaganza. The first 100 pours will be served in a limited “keep the glass” goblet. Beyond Machination, other brews include: Quixotic, a Belgian quad; Chardonnay Barrel-Aged Saleos, a Belgian golden strong ale; Kentucky Bourbon Meristem, a Russian imperial stout; and Whiskey Brabble, a robust porter. Food will be provided by Quiero Arepas (1 – 4pm) and Mestizos (5 – 9pm). An ugly sweater competition (with prizes) will commence at 7pm, with judging at 8pm.

One of the Denver-iest of Denver beer events, only breweries within city limits are invited to pour at Festivus. Now in its fourth year, the event features some of Denver’s newest breweries (Cerebral) along with some of its longest-tenured (Wynkoop). Tickets are $40 for general admission and $65 for VIP. There is also a $10 roundtrip shuttle option.