Dear Denver, when does it become unfashionable to say, “Happy new year” in the new year? Is it now? How about now?

Anywho, I hope that your year’s off to a good start and that you are making a dent in those pesky resolutions. What are MY resolutions you ask? Well, that’s a little personal but here are a few:

If your new year’s rezzies involve having more f-u-n, well, you is in luck. Peep the list below for some good time American magic and then you can eventually get around to dusting off that Ab Roller.

(For more free/low-cost events this weekend, check-out Westword’s 10 things to do for $10 in Denver blog, which includes the Weedgalized Book-Release Event at the Denver Press Club, Raise The Roof at Glob, and Something Fabulous: Comedy, Burlesque & Variety Show at Blush & Blu.)

From the folks that brought you TheBigWonderful comes the new and improved Night Bazaar! This time around, guests will have the opportunity to enjoy delicious homemade food, craft beer and cocktails, artisan vendors, soulful music, and a food truck garden on both Friday and Saturday nights. Come shop, sip, and eat. No cover and a great way to start your weekend.

It’s a killer show this month with Denver legend Louis Johnson headlining the show. Louis has been seen on Showtime, Comedy Central, and A&E as well as touring all over the world. Additional funny peeps include Sam Tallent, Christie Buchele, Troy Walker, Tim Messenger + some special guests! Hosted by Stephen Agyei & Matt Monroe. Tickets are $10 and are on the verge of selling out so buy yours now!

There’s a new dance night in town! Ready Set Go will be spinning the best in Soul, Go-Go, Surf, Oldies, 60’s, Rock, and more! No cover.

Beautiful babies of Denver, come dance it out at Denver’s favorite indie rock dance night with DJs Hollow and DJ Tower. They’ve even got a few pairs of tickets to give away to see Who’s Bad: The Ultimate Michael Jackson Tribute Band this Saturday night. No cover + FREE PBR before 10pm, so come early! ($5 after 10pm.)

The Denver Art Museum’s young philanthropist group, CultureHaus, invites you to Art of the Maker, featuring DeVotchKa! This fundraiser will provide access to some of Colorado’s finest makers, a sensory experience from Invisible City, a DJ set by Audio Visual Violence Club, booze + bites, a photobooth, the ability to snag original sketches from our state’s most talented artists, and a full performance from Devotchka. Tickets run $75 – $95 and benefit future DAM programming. Dress to impress…and dance!

In the grim darkness of the year 3016, there are no jokes. Evil robots harvest human laughter to power the terrible machines that carry out their unspeakable machinations. All that stands in the way of the robot overlords complete control of humanity is one last bastion of comedy! Join comedic heroes and heroines Sean Cummings, Mallory Wallace, Tim Messenger, Nate Balding, Rachel Weeks, Nathan Lund, and Troy Walker to save the human race! Hosted by Jordan Doll and Aaron Urist, with DJ Erin Stereo on the ones & twos. Tickets are $7 at the door.

Ditch the limelight, forego the scene, and explore the delightfully dimly lit corners of your city. Weird Touch is a new(ish) all-vinyl dance party collaboration offering an eclectic, yet cohesive mix of darkly tinged nu-disco, indie dance, and weird house. With DJs Fancy Matthew and Shannon von Kelly, $5 gets you to your happy place.

Start your Sunday with an easy, all-levels yoga routine. Local instructor, Mary Susan, offers a “sweet, sweaty, and soulful flow” at Factotum. Just $15 for the class + a post-pose beer or kombucha.

Bring in your favorite vinyl for a spin on Sundays. It’s a dollar off full pours all day and the Denver Kush Club will be giving out free joint cards for those who partake. As always, delicious snacks will be available at ZIVIX Five Points.

Come celebrate the truth being out there this Sunday night at the Oriental. There will be trivia, a costume contest, and the season premiere on the big screen with a special appearance by The Enigma! Tickets are $10, 18+.

End your weekend with a familiar film, $6 cocktails, snacks, and a rad atmosphere. This week, guests can enjoy a screening of Anchorman. No cover.

Come gather at The Palm in the spirit of community building for engaging conversations, beverages, snacks, and the option to ice skate and/or play broomball. (If you are interested in skating, you may bring your own skates or rent for no charge!) This event is FREE and open to the public, but please RSVP ahead of time.

Counteract that case of the Mondays with some delicious beer and cheese! Tickets are $27.37 and get you five brews expertly paired with five cheeses from The Truffle Cheese Shop. Yum!

What’s not to like about bicycles, business, and creative ideas? This entertaining community exchange is designed to help incubate bike biz, develop entrepreneurs, and improve all things bicycle. Throw in a little bit of magic (read: beer) and you have a pretty bad ass weeknight outing. This event is FREE, but you must RSVP here. 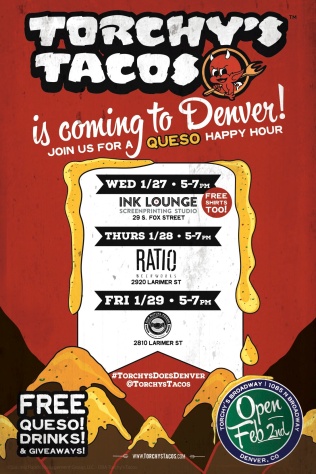 Stop on by Stem Ciders as they pair four slices of pie from The Long I Pie Shop with four ciders, for only $20.  Yeah-uh.

3 Course Comedy is a monthly food-based comedy showcase hosted by Adrian P. Mesa and Eric Henderson. This month, join in for a traditional Cuban feast complete with an instructional cooking session by Adrian himself. FREE food. FREE show. Cheap beer. Live podcast. (Each show is recorded and released as a podcast available on iTunes and at 3coursecomedy.com.)

Ratio Comedy is pleased as punch to have the queens of Chicago comedy, The Puterbaugh Sisters, headline a night of killer laughs. Festival favorites and hosts of Chicago’s long-running show Entertaining Julia, The Puterbaughs are a can’t-miss duo who are about to take LA by storm. Hosted by Ian Douglas Terry and featuring Cody Wayne Hurd, Andrew Bueno, and more, get your hell yeah on for FREE.

Get a taste of Torchy’s before they fire up on Broadway – opening February 2nd! FREE chips & green chile queso will be available to guests while supplies last! No cover!

Stop by LoHi on your way home for an exclusive trunk show with minimalist-chic NYC lingerie line, Negative Underwear. Negative Underwear’s collection is a labor of love by Boulder native Marissa Vasper and her partner Lauren Schwab, now based in NYC. The two met in college and felt a need to fill the void in an undergarment industry that was overtly underwhelming. A photo booth, drinks, and hors d’oeuvres will round out this evening of fashion and fun. This event is FREE and open to the public.

A night of show & tell about riding fat bikes during the winter season. Learn about winter cycling on these fatties from REEB cycles and Oskar Blues. This event is FREE, but you must RSVP here.

DCPA has introduced Theatre Thursday as a new way to make your night at the theatre even more memorable! Each ticket includes a festive pre-party, complete with a complimentary cocktail and live music, in addition to the performance. Just enter the promo code THURSDAY when selecting your tickets to take advantage of this special offer #nobodyputsbabyinacorner

Cartoons & Comedy is a nostalgic comedy show, created by Christopher Baker, that features comedians riffing on your favorite cartoons and commercials from the 80s and 90s! And this month, it’s the three-year anniversary show! This means the biggest show to-date. There will be three top-secret super surprise guests that will blow your mind. If you’ve been meaning to come, but have never made it, this is the month to check it out. And don’t worry if you’re short on cash, this ish is FREE.