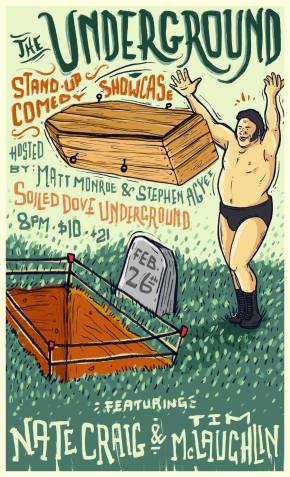 (And for more free/low-cost events this weekend, check-out Westword’s 10 things to do for $10 in Denver blog, which includes Radio 1190 Night at Pon Pon Bar, MOONGLOW at Leon, and Something Fabulous! Comedy, Burlesque & Variety Show at Blush & Blu.)

From the folks that brought you TheBigWonderful comes the new and improved Night Bazaar! This time around, guests will have the opportunity to enjoy delicious homemade food, craft beer and cocktails, artisan vendors, soulful music, and a food truck garden on both Friday and Saturday nights. Happy hour from 2 – 6pm and 10pm – midnight. No cover and a great way to start your weekend!

The Nerd Roast is back with Star Wars vs. Star Trek! Watch comedians in costume flame each other in the ultimate nerd battle. View the line-up here. This show is FREE although donations will be accepted for Planned Parenthood. Audiences members are encouraged to dress-up as well!

The Underground is back! And this month, the hilarious Nate Craig will be headlining for your LOL pleasure! Nate has been seen on Last Comic Standing, Comedy Central, MTV, y mas. Additional funny peeps include Tim McLaughlin, Sam Adams, Adrian P. Mesa + a super special secret guest! Hosted by Stephen Agyei & Matt Monroe. Tickets are $10 and will sell-out!

Start your weekend with dancing + drinks! Ready Set Go will be spinning the best in Soul, Go-Go, Surf, Oldies, 60’s, Rock, and more! No cover.

Come on out for an extra special edition of Lipgloss, with Todd Fink of The Faint joining DJs Hollow and Tower in the DJ booth. A Lipgloss dance floor favorite since they started in 2001, The Faint represent the best of early dance-punk + electro-rock. Get on it Denver! Pre-sale tickets are $7, $10 at the door.

Sean Patton + Caitlin Cook are bringing The Cacoma Tour to Denver! Come on out for a raucous night of LOLs. Featuring Christie Buchele and hosted by Nathan Lund. Tickets are $12.

Hola Tanneritos! To celebrate the return of everyone’s (least?) favorite 90’s sitcom, the Oriental will be hosting a Fuller House Brunch. Come dressed as your favorite character, watch some eps, practice your “Cut. It. Out.” and test your fandom at Full House trivia. Cash prizes for best outfit/impression + trivia winners! FREE bagels and from DJ’s Berkeley Cafe and $4 mimosas. $10 to participate in the costume/trivia contests; FREE to hang out and watch.

On the final Saturday of each month, Buntport presents you with three stories related to a theme. Two of these tales are true, but one of them is nothing but a fib. Can you figure out which one is baloney? Fun for all ages (seriously grown-ups, this is an event that both you and your kids will enjoy), cute contests, and prizes to boot. Tickets are just $6 – $8, with $1 off if you dress like a duck. (So in other words, whatever you were planning to wear that day anyway.)

It’s the end of the month and time to get loose with that caboose! Let the lead out! String up that freak flag and let it fly! Performers start with their normal sets but then must contend with the antics of the Funky Brunch players. This month’s performers include Allison Rose, Alan Bromwell, Patrick Scott, Jose Macall, Ian Douglas Terry, and Jordan Doll! Guest host is Timmi Lasley! Accompanied by a funkadelic DJ and a food truck for your brunching pleasure, this show is the perfect way to get your Saturday started. No cover.

What is Crush City? Each month, comedians Aaron Urist and Jordan Doll assemble an A-Team of comedic superheroes, visionaries, madmen, and crushers from Denver and beyond, to create a magical night of stand-up perfection and comedic destruction. This month’s performers include Zeke Herrera, Patrick Richardson, Christie Buchele, Janae Burris, Brent Gill, and Jordan Doll. DJ Erin Stereo will be holding it down on the ones & twos. Tickets are $7 at the door.

Ditch the limelight, forego the scene, and explore the delightfully dimly lit corners of your city. Weird Touch is a new(ish) all-vinyl dance party collaboration offering an eclectic, yet cohesive mix of darkly tinged nu-disco, indie dance, and weird house. With DJs Fancy Matthew and Shannon von Kelly, $5 gets you to your happy place.

Scream Screen, your home for horror, is back on a new night with a collection of films to make you want to bite and scratch your way into the theater! This week’s film is the canine classic, Cujo. Denver hardcore band, Cadaver Dog, will be playing a set at 9pm before the screening and you do NOT want to miss this. Tickets run $7 – $11.

Put on your red carpet finest and come drink delicious champagne, eat caviar + oysters, and watch the stars win and lose in this year’s Academy Awards. There will be smiles, there will be tears, and there will definitely be bubbles! No cover.

Watch red carpet arrivals in Henderson’s Lounge from 5 – 6:30pm and then head into one of the theaters (one theater will be for the serious watchers while the other house will be for the more social crowd) to watch the ceremony. The Denver Film Society will be selling Oscar ballots for a suggested donation of $10. Each ballot will enter you into a drawing for a prize. $25 bottles of wine, Champagne + drink specials all night. FREE + open to the public – first come, first seated!

It’s the gayest Oscar Party of them all and you are invited! Join The Queerbots for finger foods, live drag queen performances, wild comedy improv, and of course…The Oscars! Prizes will be awarded to the Best Dressed Diva and more, so dress to impress! Tickets are $25 and going fast!

FREE comedy show on the last Sunday of every month, featuring local and national talent in the coolest comedy club you’ve probably ever been to. Pick-up a FREE Sexy Pizza slice card on your way out and end your night with some delicious East Coast-style pizza. This month’s comedians include Tim McLaughlin, Rachel Weeks, Andrew Bueno, Jordan Doll, and headliner, Hippieman. Hosting services provided by Matt Monroe. FREE street parking on Sundays!

St. Kilians Cheese Shop is back in the taproom for a pairing of cider and cheese. For only $20, enjoy 4 pours matched with 4 unique cheeses from Colorado. View the full menu here. Cheese me!

Choose either five flights of wine paired with five cookies for $15 or one full glass of wine + four cookies, starting at $9. (Gluten-free option available.) Screening of Troop Beverly Hills starts at 6:30pm.

David Williams is a freelance photographer from Denver, Colorado, currently living in Brooklyn, New York. Williams will discuss and sign his photographic collection Men with Cats: Intimate Portraits of Feline Friendship, which showcases a cross-section of American society — musicians and artists, soldiers and CEOs, truck drivers and tattoo artists — with one very furry common denominator. This event is FREE.