In the words of Wil Wheaton in Stand By Me, “TRAAAAAAAAAAIN!”

You guys, the #TrainToThePlane is finally open for business. No more begging friends for a ride, no more offensively early trips on the SkyRide, and no more staying in that lame relationship just one more week so he can pick you up from the airport…we are all free.

As you probs already know, everyone is pretty excited about the new A Line and to celebrate, there will be free rides and a slew of station parties happening this weekend. These events are family-friendly and feature food, art, fashion, music, kids’ activities, a beer/wine/cider garden, live entertainment, and more #allaboard

Read on for more fun times this week and for additional free/low-cost events this weekend, check out Westword’s 10 things to do for $10 in Denver blog, which includes Stuff on Walls at AwareHouse Denver, the Failure Fair at MCA Denver, and African Culture Night at Afrikmall.

Foreign film fans! Czech That Film returns for its fifth year with new films, a restoration, puppets, an opening night reception, and more!

Mixing hip with the weird, Black Sheep Fridays runs weekly through April 29th from 6 – 8pm in the MCA Café. Visitors can stop by anytime during the evening to experience the fun (happy hour runs from 5 – 7pm). This week’s theme is Cornholio, where guests can partake in a cornhole competition with Beavis and Butthead. Free for members, $5 for regular people.

The passing of Prince has removed yet another color from the spectrum of modern music. This Friday night, come celebrate the lives, the music, and the impact of this artist and others that we have lost this year, including David Bowie, Phife Dawg, Merle Haggard, Maurice Wright, and Glenn Frey. Special guest DJ Rockstar Aaron. No cover before 10pm, $5 afterwards.

Celebrate the arrival of the weekend with dancing + drinks! Ready Set Go will be spinning the best in Soul, Go-Go, Surf, Oldies, 60’s, Rock, and more! No cover.

Uncalled Four is a hilariously inappropriate game played by four of Denver’s funniest comedians and YOU! Come watch comedians Harrison Rains, Jodee Champion, Eric Henderson, and Kevin Stanton as they compete to see who is the funniest/most terrible contestant. Audience prizes include 420 gifts (with a 21+ ID), local grub, free drinks, change from in-between the couch cushions, and more! Tickets are $11 for the show or $20 for the show + beer from Call to Arms Brewing Company.

Have you ever walked by a local building and been like, “I wanna get all up in that”? Well, this Saturday and Sunday, the Denver Architectural Foundation invites you to celebrate Denver’s unique architectural landscape by taking part in the annual celebration, Doors Open Denver. This FREE event gives you the opportunity to experience the built environment of nearly 70 sites and visit many buildings that typically are not open to the public. Learn more and see more of Denver.

At the Spring Flea, there’s always more than just shopping. Come both Saturday and Sunday to peruse over 160 vendors, indulge in an adult bevie (or four), meet some adoptable pups, sample some food trucks, and/or simply relax in the lounge with your friends. Tickets are $5 and include a beer, margarita, or soda. 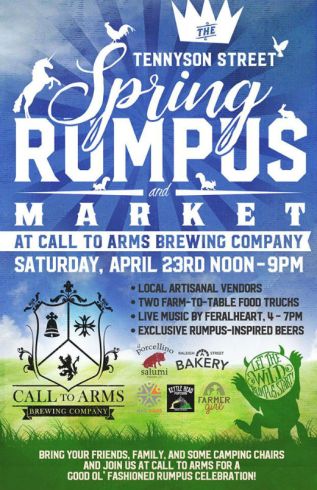 Gather your friends, family, and neighbors together for a day of good ol’ fashioned Rumpus fun in the parking lot and taproom. Dust off your camping chairs and bring them down to eat, drink, shop, and chill while CTA releases some Rumpus-inspired beers throughout the day. Live music from FeralHeart from 4 – 7pm. View list of vendors here; no cover.

Arrive anytime between 2:30pm and 3pm to mix and mingle in the gallery space over free tasty coffee and nibbles. A guided tour of the gallery will begin at 3pm, led by Leon co-owner Eric Nord and curator Camille Shortridge. Eric and Camille will talk about how galleries work, share their tips for feeling comfortable in any gallery space, and even how to start your own art collection on a budget. Bring your friends, and bring questions. This event is FREE, but you must RSVP ahead of time.

Turn it up! This Saturday, Youth on Record will be hosting a silent disco community event with SoundDown Party. Doors open at 6pm— socialize, tour the facilities, and nom on food truck bites and other snacks. At 7:30pm, grab some headphones and start moving…you can dance until 10pm, without disturbing the neighbors! This family-friendly event is FREE.

One night only! The result of a joint production between France and Czechoslovakia, Fantastic Planet might as well have been beamed in from deep space, way beyond what regular viewers are accustomed to. Tickets run $7 – $11 and plan on coming early for an adult coloring contest and naughty drink specials!

Bring in your favorite vinyl for a spin on Sundays. It’s a dollar off full pours all day and the Denver Kush Club will be giving out free joint cards for those who partake. As always, delicious snacks will be available from ZIVIX Five Points.

FREE comedy show on the last Sunday of every month, featuring local and national talent in the coolest comedy club you’ve probably ever been to. Pick-up a FREE Sexy Pizza slice card on your way out and end your night with some delicious East Coast-style pizza. This month’s comedians include John Bueno, Cody Spyker, Kevin Stanton, Mike Hammock, and headliner, Phil Palisoul. Hosting services provided by Eric Henderson. FREE street parking on Sundays!

Start your week off right by connecting to yourself and your community! This FREE all-levels yoga class will get your body moving and breath flowing while enjoying Denver’s beautiful warm-weather nights. This class is supportive to beginners and creative and engaging for more experienced practitioners. Please bring your own yoga mat.

Interested in recording music in the studio or editing your own videos? Need to scan your drawings or use Photoshop to improve your photos? Want to use a 3D printer or learn about Arduino? ideaLAB is the library’s digital media lab/maker space that has a wide variety of hardware and software available for visitors to use. FREE.

Come on by Stem Ciders as they pair four mini pies from The Long I Pie Shop with four ciders, for only $20. (Gluten-free pies are available for $2 more.) View the full line-up here. Yuh – um.

The Ratio Quiz Show is a new show that pits teams of audience members (up to 5 people) against a panel of “experts”. If the expert team wins, the prizes for the audience members suck…if an audience team takes first place, the prizes are AWESOME. This month’s theme is booze, so show up with your friends in the know for your chance to win! Hosted by Ian Douglas Terry; no cover.

On the last Wednesday of every month, Beryl’s will be offering a cheese pairing with their friends at St. Kilian’s Cheese Shop. $20 gets you 4 beers and 4 cheeses.

Join self-published author and independent publisher, Dana Ellington for the tips, tricks, and tools you’ll need to write, edit, and publish a full-length novel. This 90-minute session is great for writers 16 years old and older and can be applied to any genre, be it fiction or nonfiction. So, if you’re wanting to finally get that novel from blank page to published, join Dana Ellington for a fun workshop for writers. FREE.

Cartoons & Comedy is a nostalgic comedy show, created by Christopher Baker, featuring comedians riffing on your favorite cartoons and commercials from the 80s and 90s. And what trip down memory lane would be complete without tasty cereal? Comedians this month are top-secret but totes worth it! And don’t worry if you’re short on cash, this ish is FREE.