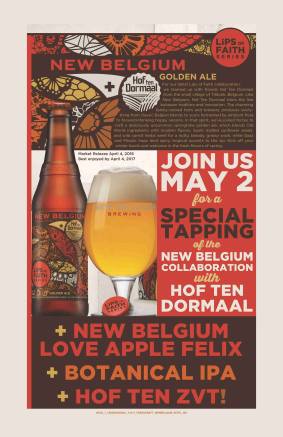 There are three liquids that pass through my body on a regular basis: water, beer, and coffee. Two of them I’m discerning about. The third, water, has to be at a Flint, Michigan-level of horrificness for me to opt for the bottled version.

The other two, beer and coffee, are kindred spirits with coffee roasters and beer brewers sharing a similar ethos. The styles of coffee-incorporated beer continue to evolve and you can now find venues that specialize in small-batch coffee and craft beer and others that serve cold brew coffee through nitro-infused tap systems. The two beverages are currently sharing a particularly cozy relationship and make perfect bookends to any given day.

At the 2015 Great American Beer Festival, there were 149 entries in the Coffee Beer category; a 22% increase in entries from the year prior and the sixth most contested category. Colorado coffee beers didn’t take home any medals last year but Twisted Pine Brewing Co.’s Big Shot Espresso Stout has won a silver and two bronzes in the past and Dry Dock Brewing Co.’s Coffee Milk Stout has taken third.

To broaden your coffee horizons, Two Parts recently released its latest iteration of the popular Passport Program series. This one, called Fika, offers BOGO deals at 24 local coffee joints. Some, like the Denver Bicycle Cafe, allow you to roll right into a stiffer drink once you’ve hit your caffeinated max. Others, like Coda Coffee, are situated next to breweries, such as Joyride Brewing Co., that will often serve up beer infused with their beans. Other roasters on the passport that have seen their product end up in brew kettles include Novo Coffee (a special series of Epic’s Big Bad Baptist that features small-batch coffee), Corvus (Former Future’s Pabulum Grisette), Huckleberry Roasters (Black Shirt’s Coffee Altbier and Our Mutual Friend’s Coffee Stout) and Pablo’s, which not surprisingly was tapped by Great Divide to provide the java jolt for their Espresso Oak Aged Yeti Stout.

If this has got you craving the bean, you pick up a Fika Passport (which is valid until October 1, 2016) here. And, since we love maps, here’s one with all of the participating venues.

Every Wednesday, Black Shirt taps a keg of specialty beer brewed on their pilot system. The 25th iteration of this series features a beer cocktail that they’re calling a RiNo Manhattan. This specific concoction takes a past vintage of their Leopold Bros. barrel-aged Red Ale and carefully blends it to create a carbonated version of the classic Manhattan. It’s fun for the whole family!

Thursday, April 28, 2016: Dining Out For Life at various breweries + restaurants

Restaurants and breweries across Denver will be participating in the annual Dining Out For Life event and donating 25% of sales to Project Angel Heart. Breweries include Baere Brewing Co., Brewery Rickoli, Epic Brewing Co., Great Divide Brewing Co., and Ratio Beerworks. Check out the full list of participants here.

If you were not aware, Aurora used to grow one helluva beet. To celebrate that legacy and the city’s 125th anniversary, Dry Dock brewed a blonde ale with beet sugar dubbing it Aurora Ale. It will be available on draft and in bombers. Comida will be serving eats (which includes beets).

Renegade will be serving Laws barrel-aged versions of several of their beers, including Redacted, Endpoint, Hammer & Sickle, and Bedwetter. 10 oz. pours will be available for $6 and 4 oz. tasters for $2.50.

Alpine Dog is releasing a new version of their popular Ski Naked in Paradise, aged on apricots and grains of paradise to highlight the “fruity, peppery and earth characteristics” of the original. Revelry Events will be serving up eats.

Oysters and stouts have a long history. Mollusks were a tavern staple back in the late 18th Century around the same time stouts were coming to prominence and a beautiful rapport was formed. Eventually, some brewers started incorporating oysters into their recipes. A modern-day version of this pairing will be served up at DBC, who teamed with Seattle Fish Company and Island Creek Oysters to brew an oyster stout. Tickets are $30 and get you two beers and a dozen oysters. There will also be a shucking contest!

It’s about time to start making elaborate plans for your garden that you’ll never actually see to fruition. Considering growing some hops? Head up to High Hops where they have 53 different varieties. The experts on the farm will gladly help you select the perfect hops for your beer and your garden. They’ll also be releasing Blueberry Wheat in cans. $2 off six packs only today.

The latest Lips of Faith offering from New Belgium teams the venerable Fort Collins brewery with Hof Ten Dormaal out of Tildonk, Belgium. The duo has brewed a springtime golden ale using spelt, malted sunflower seeds, and wild carrot herbs, along with Saaz and Mosaic hops, available tonight at Freshcraft. The taproom will also be offering New Belgium’s Hop Kitchen Botanical IPA and Love Apple Felix, along with Hof Ten Dormaal’s Zure Van Tildonk Blonde Sour. And, those in the service industry can enjoy 20% off their check and a free draft beer with food purchase.