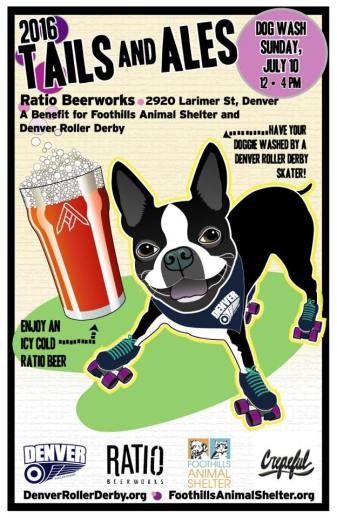 After four days of amateur firework displays at all hours, I’m reminded of why I usually try to leave Denver over the 4th of July weekend.

Though it might be a week too late to avoid the pyrotechnics, one good reason to get out of town this weekend is the 20th annual Colorado Brewers Rendezvous in Salida, CO on Saturday, July 9, 2016. An intimate affair even by Colorado beer fest standards, attendees will be able to rub elbows with more than 75 Colorado brewers while sampling 300+ different beers.

The picturesque Riverside Park in the heart of Salida will host beer tents, food vendors, and live music while providing easy access to the cooling waters of the Arkansas River. Far enough off the beaten path – and not on Interstate 70 – Salida avoids much of the summertime tourist traffic that can turn a hoped for relaxing camping weekend into a tent-pitching turf war.

Tickets are $40 and include unlimited tastings and a commemorative beer glass. A $15 designated driver ticket is also available.

For events in town, read on…

What can’t you get beer to taste like these days? From Key lime pie Berliner Weiss to s’mores Stouts, dessert beers have proven popular. Launch Pad is adding a new one to the mix with a firkin of brew evoking strawberry shortcake.

Boulevard Brewing’s venerable Tank 7 Farmhouse Ale – named after the numbered fermenter it was first brewed in – celebrates its 7th birthday on 7/7. Falling Rock is throwing a birthday bash with beer specials, cornhole, and a birthday cake. Boulevard reps will be on hand with a few special birthday treats.

While the north Denver brewery has been pouring pints for about two weeks, Bruz will throw a three-day official opening party starting on Friday. Specializing in Belgian-style beers, you can sample Jagged Twilight (Quad), Dawg Daze (Belgian IPA), Talus (Tripel), Dame Blanche (Wit) and Trubbel (Dubbel), among others.

One favorite beer yet to re-see the light of day since the reopening of River North will be tapped on Saturday. Hoppenberg, a Belgian double IPA, which marries delicate Belgian yeast with bold American hops, will be tapped and available in bottles for $6. “Aggressively hopped with Columbus, Cascade and El Dorado, with even more El Dorado added during dry-hopping, Hoppenberg bursts with notes of pineapple, grapefruit and fresh melon, yet finishes dry for a lingering bitterness.”

At the 2015 Denver Rare Beer Tasting – a fundraiser for Pints for Prostates – Jeff Stark and Ericka Stielau bid on and won a chance to develop and brew a beer at Spangalang. The result was Stark and Stielau Saison, a tropical, citrusy Saison. All the proceeds from the first keg will benefit Pints for Prostate and there will also be three shandy-esque variations of the Saison: blood orange, grapefruit, and lemon.

Sunday rolls around and you know there are chores you should be doing, but you’d much rather chill on a patio with a beer. Head over to Ratio to kill two birds with one stone and have your dog washed by a Denver Roller Derby skater. $15 suggested donation, cash or credit.