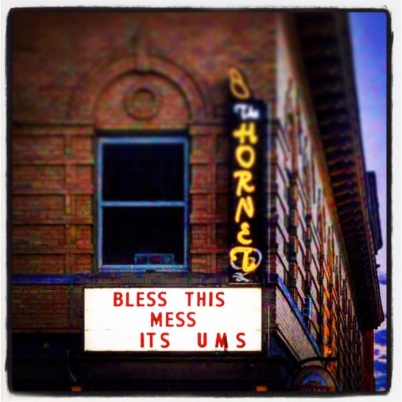 UMS (or “You a Mess” or simply, “The Mess”) has become one of my absolute favorite times of the year. I don’t even think I fully understood what it was the first time I attended but was immediately enamored by this ever-evolving musical experience that feels like the best summer of your life, packed into just a few days.

I have several friendships that have started at UMS, been solidified over the years, and I even met my current live-in Chilean arm candy at The Mess four years ago. (Somewhat surprisingly at a gay bar, where I immediately assumed he was gay because he was well-dressed, smelled good, and was wearing bright-colored shoes. Latinos, am I right???)

The UMS is often described as Denver’s SXSW and although I have been to the iconic fest just once, I would say that is a fairly easy way to describe it. With stages jammed in every nook and cranny on South Broadway, day parties (such as the Treefort, SpokesBUZZ, and College of Arts & Media parties), complementary shows (such as the Mile High Parlay, Backyard Shindig, Sofar Denver, and Weird Touch), pop-up events (such as the Eyerock Poster Show), after parties, festival rumours, lots of fashionable hats, and arguments about whether or not the festival has “sold out”, it does seem like there are a fair amount of similarities between the two. But the good news is that our festival is still quite accessible, while also being consistently good. With pre-sale wristbands costing a mere $40 and current prices coming in at $55 (plus a $5.50 service fee), this four-day festival (that includes an additional pre-party this year on Wednesday night) ensures that you will even have some walking around money during the fest. (Single-day tickets are also available at $35 a pop.)

I find that whenever I am trying to describe the hipster wizardry that is UMS to someone who has not attended before, their first question is usually, “Well, who’s playing?” I get it; it’s a fair question. However, what I always tell them is that it actually does not matter. For realsies. With hundreds of national and local performers spread across 17 venues, the magic of this fest is that you always discover something new. No matter what. The beauty is just diving in man bun first and seeing where you end up. (But for those that need to know what they are getting into, headliners this year include Poliça, Thee Oh Sees, Allah-Las, Lee Fields & The Expressions, San Fermin, and a special performance by Whitney on Wednesday night (!!!) (You can also find a few different playlists on Spotify to help you prepare.)

So whether you’re a newbie, on the fence, or have been counting down the days since last year’s mess, know that wherever you end up, will be perfect. (And maybe you’ll even meet your new gay boyfriend.)

The Underground Music Showcase (UMS) runs July 28 – 31, 2016 in the Baker neighborhood. Wristbands are still available but will go up in price once the festival begins.

2 thoughts on “God Bless this Mess”