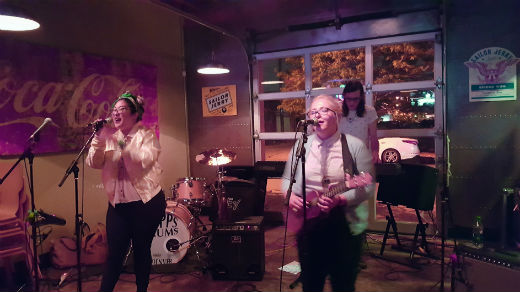 The Milk Blossoms bringing some beatboxing nerd pop to #UMS2016

The Underground Music Showcase started a day early this year and I am already feeling the effects (!) You can view an event overview here and a collection of UMS memories from local musicians, DJs, business owners, and super fans here.

The UMS staff should really consider offering personal coaches throughout the event, to help attendees pace themselves, get the proper nutrition, and enough sleep. Until then, I suppose we shall all exist on Tecate, pizza, Instagram, and adrenaline #partyon #UMS2016

A FREE, all-ages music festival set amongst the beautiful chaos that is the Underground Music Showcase. Visit their Facebook page for the schedule/line-up.

From the Underground Music Showcase (UMS) website, “Like that old friend you only see once a year, The UMS will wreck your house, get you drunk and ultimately save your life in one sweaty blur, leaving you reeling and exhausted and a few days away from wishing it would come back again already.” Purchase multi-day wristbands online and single-day tickets at the box office.

The annual Denver County Fair is a place to share ideas, traditions, creativity, and local culture. This unconventional fair highlights the talents, trends, and interests of our amazing City and County residents. Event includes celebrity cats, a geek pavilion, zombie beauty pageant, competitive eating contests, unicorn rides, x-treme breakfasts, and so much more! View ticket options online. The fair runs 4 – 9pm on Friday, 10am – 8pm on Saturday, and 10am – 6pm on Sunday.

Get your Lipgloss fix with an added bonus of Denver Disco providing additional grooves on the patio. No cover before 10pm; $5 afterwards. Cheap libations + impeccable grooves all night long. Plus! Be on the floor around midnight for your chance to win tickets to see Phantogram!

One screening only! Take a break from the heat and check out Rigoletto with the Opéra National de Paris on the big screen. Principal cast includes Michael Fabiano, Quinn Kelsey, and Olga Peretyatko (if that means anything to you.) Tickets run $15 – $18.

This Saturday, escape the big, bad city and come celebrate the opening of (what I am guessing) will be your new favorite destination bar, Bread Bar. “Bread Bar will be a salt of the earth stop for cocktails and beers—for locals, ski commuters, and ghost town-geeks alike. Visitors are encouraged to take a load off and take in mountain views and mining history.” #nobaristoofar

The Gift of Jazz Collective, a group of accomplished Front Range jazz professionals, will be performing a FREE concert in The Galleria at Denver Performing Arts Complex this Saturday. This concert will feature modern interpretations of jazz standards along with original compositions penned by the performers. The Gift of Jazz is a Colorado nonprofit organization committed to enriching the community with jazz education and performance programs.

Epilogue Comedy is turning 3! Whether you are/are not partaking in the mess this weekend, plan on popping into Mutiny on Saturday night for a FREE (and cool) comedy show. This month’s comedians include Ron Babcock, Anthony Crawford, Ryan Nowell, and Georgia Rae! Hosting services provided by Timmi Lasley. This show is all ages so bring your grandmama AND your nephew!

City Park Jazz, or “jazz in the park”, is a great weekend culmination of dogs, babies, adults, brie, blankets, vino, hand sanitizer, port-o- potties, and food trucks. This week, plan on doing some noodle dancing with Melvin Seals of the Jerry Garcia Band. Come see and be seen; rain or shine. FREE.

FREE comedy show on the last Sunday of every month, featuring local and national talent in the coolest comedy club you’ve probably ever been to. Pick-up a FREE Sexy Pizza slice card on your way out and end your night with some delicious East Coast-style pizza. This month’s comedians include Mallory Wallace, David Rodriguez, Jacob Rupp, Nathan Lund, and headliner, Rob Babcock. Hosting services provided by Eric Henderson. FREE street parking on Sundays!

Start your week off right by connecting to yourself and your community! This FREE all-levels yoga class will get your body moving and breath flowing while enjoying Denver’s beautiful warm-weather nights. This class is supportive to beginners and creative enough for more experienced practitioners. Please bring your own yoga mat and check any weather-related changes via their FB page.

Meet Odessa: an online platform for Denver’s creative community that encourages artists to create and connect with intention. Participants will talk about what it means to be an intentional creator and how that can impact Denver. FREE and open to the public; BYOB. 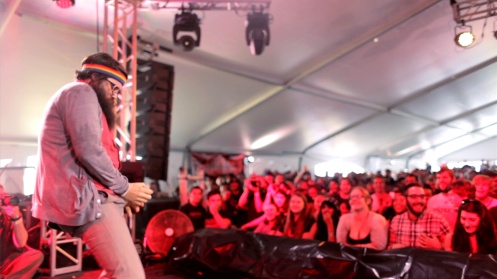 Every Tuesday, $1 of each beer sold at Copper Kettle beer will be donated to a local charity. This week’s organization is Big Dogs Huge Paws Rescue, a nonprofit that rescues, rehabilitates, and re-homes unwanted giant breed dogs that have been mistreated, neglected, abused, and/or abandoned. You drink, they donate – it’s that simple.

It’s a magical blend of coordination, showmanship, humor, and interactive storytelling. It’s a comedy show that brings people together in a respectfully dirty, unpredictably ridiculous, and oddly touching celebration of sexual freedom and expression. It’s a serious competition to see who can fake-f*ck nobody better than anybody else. This is Air Sex. Tickets are $10.

Sweet ass patio, comedy by David Rodriguez, and a FREE screening of Scott Pilgrim. The first 25 people after 7:30pm to mention Film on the Fax will receive a free draft from Ratio Beerworks.

Enjoy a FREE screening along with movie-themed drink specials and fun souvenirs to take home! All films start around 9pm but come earlier for a seat and/or to order food. This week’s film is Office Space. FREE and cool.

Live at Light Rail performances will take place most Wednesdays during the warmer months and will showcase local bands, choirs, ensembles, and school groups, who will greet light rail patrons with a variety of creative performances. The program will draw from a range of live performers of all ages and specialties, from high school ensembles and undergrad percussionists to adult choir groups and drum circles.

Science fiction feeds the imagination and helps us to explore possible futures, our hopes and fears, and the unfolding of technologies. Join scientists from the Denver Museum of Nature & Science and Metropolitan University film professor, Vincent Piturro, as they screen famous sci-fi films and lead discussions to break down the science behind these alternative possibilities. This week’s screening features the classic, King Kong. Tickets run $12 – $15.

A roomful of “grown-ups” sharing their diaries, yearbooks, journals, and notes from when they were tweens and teens? Yes, please! This is an event you don’t want to miss. You’ll laugh, cringe, and commiserate that he never did call when he said he would. Still have access to your old journals? Visit the site to be a part of the show and share your angst with others! Tickets are $12.

Summer nights were made for outdoor movies. Come enjoy this classic feel-good film on the big screen. Movie attendees are encouraged to bring picnics or purchase food from on-site gourmet food trucks, starting at 6 pm.