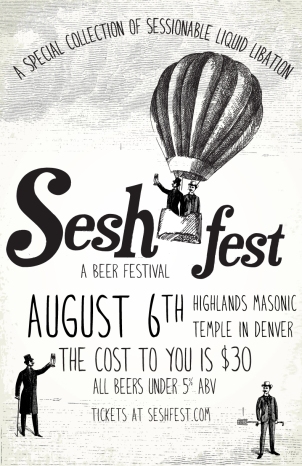 Ah, the session beer. Codename for “beer I can drink a lot of.” Originally a British term to describe a marathon pint tippling period that didn’t leave one too inebriated, session beers now come in any number of styles. The challenge is brewing a flavorful beer that clocks in at under 5% ABV and can stand up to other higher-octane, ingredient-packed menu items.

Session Beer was introduced as a Great American Beer Festival category in 2008. There were 33 entries with Boulevard Brewing Co. taking home the gold that year for their Unfiltered Wheat Beer. The category peaked in 2014 with 94 entries and Benchmark Brewing Co.’s Oatmeal Stout taking gold. Sessionable styles of milds, bitters, blondes, XPAs, IPAs, porters, wits, and saisons, among others, have all been past medal winners.

Over 30 Colorado breweries will roll out their version of a patio pounder this Saturday at the third annual Sesh Fest in the Highlands. Tickets are $30 and include unlimited samples.

“I was pushing for an all-session festival for years at my old brewery only to be laughed at,” recounted Call to Arms’, Jesse Brookstein, in a recent Two Parts press release. “They also laughed at Louis Armstrong when he said he was gonna go to the moon.”

Rebel is preparing exotic and creative dishes to pair with five of their favorite River North Brewery beers. All dishes and beers are a la carte so have as many or as few as you’d like. Beers to be poured include River North White, FarmHouse, J. Marie, Hoppenberg, and Whiskey Barrel Quandary. No advance tickets necessary.

For the 37th One Keg Wednesday over at Black Shirt they’re tapping a small batch of Minted Watermelon Saison. This will be the most refreshing beer you drink on a Wednesday morning.

Renegade has teamed with Peaceful Creations to offer a night of beer and ice cream. $12 gets you a flight of three beer floats.

Since 2011, the first Thursday in August has been cause for celebration at bars and breweries across the globe, where patrons raise a glass in honor of IPA Day. The “social media-based” hop holiday encourages adherents to use #IPAday when documenting their participation. Black Shirt will be pouring a slew of IPAs starting at 11am. Parry’s Pizza in Longmont will host a mini IPA tap takeover of their own and Avery will have more than eight unique IPAs on draft.

Copper Kettle’s easy drinking summer Hefeweizen returns just in time for the season’s hottest stretch. The traditional German wheat has a soft bouquet of bubblegum and clove. Smoke: Colorado Craft Barbecue will serve up the eats.

This Sunday, balance your boozy brunch with a 5K or 10K run through the Highlands neighborhood. Tickets are $25 and include the entire bRUNch experience (run, entree, two drinks, tax, + gratuity). Ticket price increases to $35 at the door so be sure to purchase in advance.

On the second Monday of every month, Renegade releases a rare one-off firkin and serves it till it’s kicked. This month’s limited beer is The Snozzberries Taste Like Snozzberries, which is their 5:00 Afternoon Ale mixed with watermelons and blueberries.