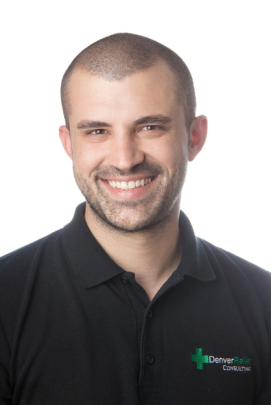 Depending on your personal leanings, Kayvan Khalatbari is a pizza hero, a weed hero, a comedy hero, or all three.  For me, it’s pizza.  And comedy. And maybe sometimes weed.

When I first moved to Denver eight years ago, I immediately became a bit pizza confused.  Growing up right outside of Philly, I have always taken good pizza for granted.  For example, if a place sold pizza, it was usually awesome.  Even the “bad pizza” was good.  Then I moved to the Wild West…what’s so hard about making pizza?  Sauce, dough, and cheese right?  Well apparently it is more complex than that.  I have heard some people say, “It’s the water”.  I have no idea what that actually means, but they always look really serious when they say it, so I guess it’s something serious.  There were some places that were just bad/sad, and some places that had good sauce and cheese, but their crust was wack.  Or I would actually find a place that made a good pie, but it was something that I would call “fancy pizza”.  (Fancy pizza has a minimum of seven toppings, two of them being artichokes and feta cheese, and it costs at least $20 a pie.)  Where was the cheap-ish, floppy, greasy (in a good way), delicious East Coast-style pizza?

When Sexy Pizza opened up in 2009, the pizza-shaped hole in my heart had been filled.  Great crust, great sauce, great cheese, fast delivery, late hours, and an ongoing support of their community.  Thank-you pizza gods.

Enter another favorite thing o’ mine: stand-up comedy.  It never fails – I am having a lame week or am in a weird headspace, so I force myself to go check-out some live comedy and all is right in the world.  Cuz if you don’t know, Denver has quite a lot to offer when it comes to weekly and monthly funny ha ha shows.  In fact, you could even say that we are spoiled.  And Sexy Pizza is the proud sponsor of some of the best events in town: Greater Than Social Club (which is a bad ass mix of live music AND comedy), Propaganda! A Comedy Show (which is not only free, but you also receive a free Sexy Pizza slice card at the end of the show), The Narrators (which is actually a live storytelling show, but usually pretty funny and always totally awesome), Lucha Libre & Laughs, Lost Souls of Comedy, Moxie, Too Much Funstival, High Plains Comedy Festival, and Sexy Pizza’s own Sexpot Comedy events, which include a free large pizza in the ticket price.   All of these shows will make you proud to be a Denverite, and all of them are either free or very moderately priced.  Hooray for more free/low-cost fun in Denver!  And hooray for pizza!

Now onto the last topic…don’t get my wrong, I am all for people having the right to smoke weed.  Do it.  However, I have always been more of a drinker than a smoker.  And there have been enough times when I have taken one hit too many at a show/party, forcing me to French exit so I could go home and suck my thumb in the fetal position.  But the silver lining to THAT story is that there is all the more Bubba Kush for you kids out there who can actually handle your shit.  (And every once in awhile I will still test my luck…)

So there you go.  Read on to learn what Kayvan calls good in D-Town and about some cool upcoming events.  (And, if you wanna hear more about Kayvan as a weed hero, and I know you do, check-out this recent podcast with local funny man Adam-Cayton Holland to learn Kayvan’s preferred term for the wacky tobacky, getting hated on by AmEx, and his plans for Denver’s fragrant future.  It’s entertaining AND informative!)

A little about yourself: I am 30 years old and have been in Denver for about a decade now.  I was born in Lincoln, NE and have been living on my own since I was 16.  I graduated college when I was 19 and immediately got a corporate engineering job, which was the impetus for my move to Denver.  After six years of working in a grey cubicle, in a grey office without plants and full of somber individuals, I walked in one morning, sat down and put in my two weeks.  At this time I was 30 pounds heavier than I am now, the lady I was living with broke up with me, my soul was in the gutter and I rented out my house to be able to sustain with no income.  So, I moved into a tent in my backyard for three months, followed by a buddy’s floor for another six.  During this period is when we started Sexy Pizza in April 2009, without any business experience or pizza making know-how.  Denver Relief followed a year later and that’s that.

What has the last year been like for you?  A dream?  Being a part of the Denver marijuana and comedy communities in a time of such tremendous growth for both has really provided me with some amazing opportunities.  I’m a lucky girl.

Any new year’s resolutions?  Don’t really understand them.  If folks really want to change something in their lives, they should just do it.  No need to wait for an arbitrary milestone.  If I had to pick something, I’d say that I want to spend much more time with family this year.  I need to learn to set aside work on occasion and enjoy things once in a while.

Favorite restaurant in Denver: So many good ones to choose from in this culinary town…probably Izakaya Den or Linger.

Favorite watering hole in Denver: Renegade Brewery.  It’s a block away from my house, there are no TVs and they have some of my favorite beer in Colorado, especially the Elevation IPA.

Favorite overall place in Denver: 1 Broadway where Denver Relief and Denver Relief Consulting live.  The oldest dispensary in Denver at the 0/0 block of the capital city in the state that is the epicenter of marijuana culture in the world…it’s a special place in my eyes and I’m proud to be a part of it.

Best event in Denver: High Plains Comedy Festival put on by Adam Cayton-Holland and Andy Juett.  2014 will be the second time around and those guys are set to assemble the best lineup of comedy this state has ever seen in one weekend.

Best new trend in Denver: Due to my hermit workaholic nature, I’m not too up on trends.  Even though it’s much more than a trend, I’d say the people of Denver appreciate and embrace local small business and art more so than most places in the country.  We seem set on creating a sustainable culture that keeps us healthy and happy.

Fondest Denver memory: So many beautiful moments.  Probably my mom and brother visiting me after I first moved out here alone and knowing no one in the city.

A friend has three hours to kill in D-Town, what should they do? Stop by Denver Relief for some Bio-Diesel, Renegade for a growler, locate Matt’s Snack Shack for some wings and find a place in the sun to enjoy.  Just relax.

Favorite US city that is not Denver: Seattle. A wetter, more somber Denver.

The now-closed restaurant/bar/business in Denver that you miss the most: El Diablo, Buffalo Doughboy and Gabor’s.

Anything you want to plug? Sexpot Comedy’s next show is January 31st at the Oriental Theater.  Two of the funniest women in the country headline: Beth Stelling and Kate Berlant, along with local favorites Troy Walker, Jordan Doll, Jim Hickox, and perhaps something by the Nix Bros.  Nikki Glaser will headline in February.  Also, Sexy Pizza’s third store opens in Jefferson Park in March and Denver Relief will be open for recreational sales sometime in February.  Lastly, stop by many retail establishments on Broadway and in Cap Hill to pick-up our new monthly magazine, birdy., which showcases local artists and just had its inaugural issue released this month.