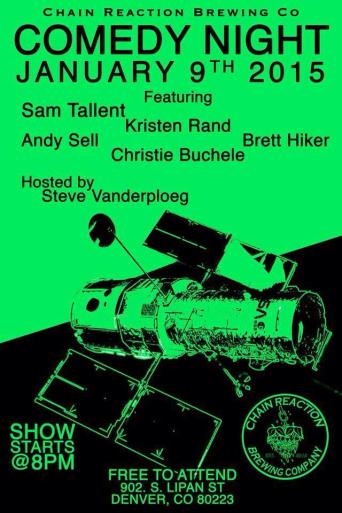 Denver!  We’ve been living in an icy tundra these past couple of days (except when it’s been a balmy 55 degrees).  You know, just your typical schizophrenic winter in the mile high.  Hope you’re staying warm and catching up on your mending.  But if you need to get out of the house, peep the below list of things to do.  And oh yeah, GO BRONCOS!

(And as per youzh, check-out Westword’s 10 things to do for $10 in Denver blog for free/low-cost events this weekend, which includes the Industrial Design Show at DADA Art Bar and Swearfest at Quixote’s True Blue.)

Do you speak Spanish or kind of speak Spanish?  Have you been looking for an opportunity to practice?  Then dust off those tildas and head on over to Hooked on Colfax this Friday night to have some drinks, roll your Rs, and make some new amigos.  Como se dice, “Pass the tissues, we all got issues”?  FREE.

Rock out with your TGIF out.  $6 cover includes a FREE Yo No Fui cassingle!

Happy 2015!  Beautiful babies of Denver, come dance it out at one of Denver’s favorite indie rock dance nights, featuring hollow and DJ Tower.  To sweeten your evening, there will be $1 PBRs and $3 wells from 10 – 11pm.  Otherwise, it’s only $5 for a whole lotta magic.  Life is short; go to Lipgloss.

You’ve played drinking games at home, now play them with the Denver Film Society!  They’ll give you the rules and thanks to Breckenridge Brewery, the first 50 guests get their first drink on the house!  Drink specials run all night long with a bar in the theater so you won’t miss a second of the movie (thank god).  Tickets run $7 – $10.  Please drink and watch responsibly; only guests 21 and over will be allowed to attend Films on Tap screenings.

Drop your child off to tinker the afternoon away.  Kids will have access to tools, materials, and art supplies to build and play to their little heart’s content while you get your errands done run.  Participants will learn the basics of tool safety and workshop etiquette under the supervision of a licensed art teacher and momma of two little makers.  Appropriate for ages 4+; kids ages 2 – 3 years may attend with an adult.  $25 per session.  Space is limited to 8 participants each week; pre-pay online to reserve your spot.

On the second Saturday of each month, Buntport presents you with three stories related to a theme.  This month’s theme is: Bad Ideas!  Two of these tales are true, but one of them is nothing but a fib.  Can you figure out which one is baloney?  Fun for all ages (seriously grown-ups, this is an event that both you and your kids will enjoy), cute contests, and prizes to boot.  Tickets are just $6 – $8, with $1 off if you dress as a duck, or something pretending to be a duck.  (So in other words, whatever you were planning to wear that day anyway.)

Cultivate your creative spirit through yoga and art by making a portable intention card using watercolors and colored pencil in this workshop combining asana and artistry.   Registration costs $35 and includes all materials.  Just bring your own yoga mat.

Start off 2015 brightly!  Come join artist Omar Rodriguez Lavandero as he celebrates the release of EFFERVESCENT FOLK POETRY.  There will be two sets of readings, along with original musical collaborations.  Appetizers, desserts, and refreshments will also be provided (donations accepted).  This event is FREE.

Expect a completely rearranged taproom, floor-pillow seating, and a special Glowing House/BSB collaboration beer on tap.  For those who don’t know, Glowing House is a folk/rock band anchored by the local married duo Steve Varney and Jess Parsons.  Their beautiful original sound is often referred to as “hauntingly hopeful” and “enlighteningly sad”.  The collaboration beer is a blend of barrel-aged red ales, along with 6-year old Cab Franc and 7-year old Merlot.  The concert is FREE but seating will be limited so be sure to come in early to secure a spot.  This is a night not to miss!

Hardwired for improv and here to blow your circuits!  This sell-out comedy invasion is back for 2015.  Come on out for a wild night of unscripted comedy, with Denver’s only GLBT improv troupe.  Using your suggestions, they explore everything from gay marriage to parenthood, lesbian sports to queer movies.  Heck, they may even turn your life into a musical.  Tickets are $10.

It’s Saturday night and what better way to spend it than with cider and bluegrass?  Come help Stem Ciders celebrate their 1st anniversary with a FREE concert by Modern Whiskey Market and $1 off of all ciders!  Plus there are rumours of a new seasonal cider being released.  Yeehaw!

Looking for someplace to watch the game that isn’t a broed-out sports bar.  Well, come watch the Broncos take on the Colts on a giant screen at the Oriental Theater, while enjoying drink specials and free shots with every Broncos touchdown.  FREE.

What could be better than spending Sunday evenings this winter cozying up to watch a classic movie with a red ale in hand?  This week’s film is Dumb & Dumber.  Be sure to come early to secure a spot.  FREE.

Every month hosts Theresa Mercado and Ian O’Dougherty will be showing a moving picture by filmmakers Joel & Ethan Coen on the big screen (in order of theatrical release), preceded by a short musical selection performed by a local musician celebrating the magnificence, importance and variety of the music from that film.  This week’s inaugural show includes musical selections by Nathaniel Rateliff and a screening of Blood Simple.  Come share your zeal and fondness with other devotees!  FREE.

Now in its 25th year, this community concert recognizes individuals and organizations who embody King’s dream of equality, peace, service, and social justice.  New this year, the Colorado Symphony will be joined by Denver’s Flobots, a hip-hop ensemble that uses music as a tool to ignite awareness, action, and positive change.  This is a FREE community concert, but a ticket is required for admission.  Free community tickets available through the Blair-Caldwell African-American Research Library and the Colorado Symphony Box Office.

Come on out every Tuesday night for OUTrageous Drag Bingo!  Your host Sasha Andrews and her weekly sidekick will have you in stitches all night long.  With tons of prizes, including gift certificates and a cake from Denver’s gayest baked goods store, Le Bakery Sensual, this is an event not to be missed!  The balls drop at 9pm so come early and get a seat as it tends to get busy.  Grand prize winner will receive bottle service for the following week’s bingo sponsored by ABSOLUT Vodka.  Haaaaaaaaay.

Wednesday, January 14, 2015 @ 7:30am: Community Yoga at the Posner Center for International Development

Build strength, increase flexibility, and aid balance while draining tension and increasing vitality.  Expect to breathe deeply, move mindfully, focus and cultivate presence by connecting movement with breath.  These weekly classes are accessible and beneficial for beginners, as well as more advanced practitioners.  Be sure to bring a yoga mat!  $5 – $10 suggested donation strongly encouraged.

Interested in learning more about how communication affects global social change?  Join The Posner Center, and University of Denver’s (DU) International and Intercultural Communication (IIC) graduate program to have a dialogue about global communication, and to share information about Posner’s work and DU’s IIC program.  This event is FREE and open to the public; RSVP today.  (PS This is the program I graduated from and look at me now!)

Wednesday, January 14, 2015 @ 7:30pm: The Reclamation of the Musical or How to Stop Worrying and Love the Dance at Cafe Max

Although musicals have been a permanent part of the lexicon since near the beginning of cinema, amongst film buffs and cinephiles the genre often gets generalized and left out in the cold.  In this new film series, participants will watch a wide variety of musicals from a few different countries, highlighting how the musical evolves to fit a culture’s needs at the time.  This week’s film is 8 Femmes.  Come early to take advantage of food and drink specials!

Come check out the Beauty Bar’s new weekly, Teez Me Pleaze Me.  All the hits from the 80s, 90s, 2000s, and today!  From Prince to Little Dragon, from Madonna to Rhianna, from Cindy Lauper to Miley Cyrus  – all your guilty pleasures.  Baby it’s cold outside, so come get warm on the dance floor!  $15 martini/manicure all night long, $3 well drinks for ladies, plus buy any shot and get a free PBR!  No cover.

If you’ve not been able to keep up with the exploding beer scene here in Colorado, then this is the event for you!  New Brews On The Block is a 10-tap takeover, featuring Colorado’s best new breweries.  Pump up your Air Jordans, slip on your overalls, make your hair look ugly, and head down to Lucky Pie LoDo for a ‪craft beer-fueled flashback to the 90s.  Great grub, bangin’ ‪‎brews‬, and mad good music.  Prizes for the best dressed! #therightstuff

Thursday, January 15, 2015 @ 7 – 9pm: Hope & Thanks and the Unforgiving Literary Series at The Dikeou Collection

This event will feature readings from Ginger Ko, Reagan Louise, Danielle Pafunda, and Brandi Homan.  This event is FREE and open to the public; light refreshments will be provided.

Cool Shit is the newest comedy drug that all the cool kids are doing (and that one kid’s dad).  This week’s show will feature Mara Wiles, Bobby Crane, Byron Graham and others in addition to headliner, Andrew Orvedahl.  FREE show, cash bar, cool shit.

Happy new year – now it’s time to dance!  This Thursday night, enjoy some Motown jams served up with chicken & waffles (free with a purchase of a drank) with DJs Maladjusted and Caramello.  No cover all night; $4 Breckenridge brews.