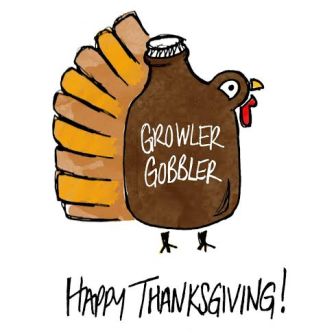 While there are many options for Thanksgiving dishes and beer pairings, when your plate overfloweth with the entire food pyramid, drinking a different beer with each dish just isn’t practical.

Instead, why not cook your entire meal with beer and then find a style that will compliment everything? (Think Blonde Ale or an American or Belgian Wheat). Non-beer drinkers can stick to their tipple of choice while still enjoying the nuances of a beer-based dinner. Plus, recipes rarely call for an entire bottle/can of beer sooooo…you know what to do with that.

A couple recipes to consider:

Malt-Beer-Brined Turkey with Malt Glaze: Thanksgiving is all about the sides with turkey filling a government-like role. If it’s properly executed, no one will say anything. But, do something that draws attention – overcook the bird, undercook the bird, trample on constitutional rights – and, HOLY SHIT THIS GUN IS LOADED! You’ll be shunned and relegated to paper plates and napkin duty at the next family get-together. This turkey recipe calls for a turkey brined with stout. Booze is a natural meat tenderizer and your bird will carry faint notes of whatever you choose.

Nightwatch Stuffing: Two years ago, I ended up with way too much stuffing. It was a pretty substantial stuffing so I filled snack bags and used it as an on-the-slopes meal. A little difficult to eat with gloves on, but damn delicious regardless. In this recipe, the author uses a dark amber ale in the original recipe but also suggests a smoked porter could be appropriate.

Green Bean Casserole with Crispy Beer-Battered Onions: You can sign a petition for just about anything. Here’s one that supports giving Nick Cage the Declaration of Independence. I’d totally Herbie Hancock a petition to get green bean casserole served more than once a year. This recipe includes crispy battered onions cooked in lager.

Slow-Cooker Beer Cheese Mashed Potatoes: Ahh, mashed potatoes. The sad Thanksgiving putty that holds it all together. This year, slow cook your spuds in a brown ale and hold the gravy volcano.

Honey + Beer Cornbread with Honey Butter: Not the most obvious Thanksgiving choice, but no one is going to complain about homemade honey butter and dark beer enhanced cornbread.

Framboise Cranberry Sauce: Cranberry sauce: underrated or unnecessary? I tend to side with the latter camp, but simmer those cranberries in raspberry Lambic and I could be persuaded otherwise.

Or, take a page from KFC’s recipe book, and whip up a Thanksgiving Turkey Cake and call it a day.

No need to wait until Thursday to get your Thanksgiving started. Head north to Berthoud where City Star will be deep-frying a turkey. Bring a dish to share. They’ll provide paper plates, napkins, and silverware.

The Long I Pie Shop is back at Black Shirt for the November pie and beer pairing. Four pies and four beers (sample size) for $20.

It’s Thanksgiving day, but fear not: Grist is equipping you with the beer you need to survive the family. They’ll be open for a few hours to fill growlers.

Instead of risking possible shootouts, road rage, pepper sprayings, tramplings, and even killer windstorms, skip the big box bacchanals and instead enjoy the plethora of beer releases around town. Then you at least have a good excuse for not getting people gifts. Snowball Express at Kokopelli; Snowed In at Copper Kettle; Chill Out Peppermint Stout at Big Choice; holiday-spiced Milk Stout and Belgian DIPA at Caution: Brewing Co.; Really Love Your Peaches (aged on gin barrel) and Malkied Scotch Ale at Boggy Draw; Cranberry Mild at Dry Dock – South Dock; and 25th Anniversary Rum Barrel Aged Imperial Vanilla Porter at Breckenridge Brewery (Littleton).

Watch the Brockos, er, Broncos take on the undefeated New England Patriots on Sunday night. Does Peyton deserve his job back when healthy? Will the Broncos be able to run the ball like they did last week? All questions best discussed over beers. Dry Dock – South Dock will be showing the game as will Ratio Beerworks, TRVE, and Kokopelli Beer Co.