Well I’m back.  Just in time to celebrate the birth of our nation (and to get crunk).  Fill your week with LEGOs, dance offs, car-sharing, vegan pizza, high fashion, free comedy, and a fireworks after-party, yo.

This program is back by popular demand!    Hosted by Andrew Orvedahl, Bring Your Government presenters have 15 minutes or less to convince the audience that their ideal form of government rules, providing at least 3-4 practical ways to get from where we are now, to where they want us to be.  Listen to their pitches, ask questions, provide your own vision during the lightning round, or just hang out and build a LEGO city.  Presenters include: Rick Griffith of Matter Studio, GerRee Hinshaw of Freak Train and James Laurie of the Flobots.  PLUS, enjoy the comedic stylings of Sam Tallent AND warm cookies and milk to boot.

They got the LEGOs, just bring your Gubment

Buntport Theater takes on 7dancers (part of the Cherry Creek Dance Performing Company) in an ultimate dance battle.  In an evening of entertainment like no other, Buntport will go toe to toe with the professionals. Complete with mini-competitions, documentary footage, and random challenges, the performance culminates in a dance-off judged by the audience.  Food and drinks will be served and are included in the ticket price of $25.

This is a fundraiser.  Money raised supports Buntport’s 13th season and helps defray the cost of a brand-new HVAC system, which will keep you in comfort and will make year-round programming possible.  (Already have plans Friday night?  Check-out the repeat performance on Saturday evening, same time.)

Since the performance at the Denver Art Museum has all done been sold-out, this is your only chance to see the musicians who will be accompanying Nick Cave during his soundsuits performance.

Apparently a new car-sharing service is now available in Denver.  If you’ve ever used Occasional Car before, the biggest difference between it and Car2Go (it seems) is the ability to find cars and use them on the fly.  To promote this new service, car2go Denver will be hosting a free event at The Kitchen downtown, which will include free food, promos, swag, and test drives of their super compact vehicles.  Create an account now using the promo code: ROCKIES and enjoy a free lifetime membership, plus 30-minutes of free driving.

Patxi’s Pizza (both the Cherry Creek and Cherry Hills locations) will be celebrating Vegan Pizza Day. The pizzerias will serve the Vegan Pizza combo, available as a whole pie or as a slice of the day, prepared in both thin and stuffed crust and featuring Daiya Vegan Mozarella, whole wheat crust, fresh spinach, crushed garlic, and red onion. Both locations will each feature a $2 Vegan Beer special in celebration of Vegan Pizza Day: Lagunitas’ IPA. 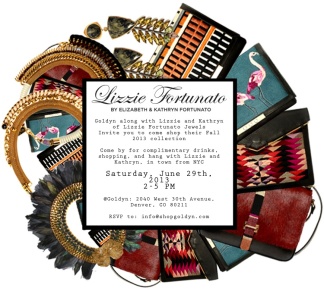 Make it a girls day at Goldyn

Lizzie Fortunato is one of the most influential and sought-after accessories lines available today. Continually designing jewelry and handbags that are exceptionally special and unique, the collection stays ahead of the curve when it comes to trends and offers only the best in hand-crafted quality. What truly separates Lizzie Fortunato from other brands is their incredible attention to details – from beadwork to embroidery, each piece is crafted with the utmost in care.

Lizzie and Kathryn, the twins behind the NYC-based accessories brand, will be present at this high-fashion event and will showcase their Fall 2013 collection.  Complimentary drinks provided.

Free comedy show on the last Sunday of every month at Lannie’s Clocktower Cabaret.  Bring a few bucks to nurse a drink while listening to local and national talent in the coolest comedy club setting you’ve probably ever been to.  Plus pick-up a free Sexy Pizza slice card on your way out and end your night with some of the most delicious East Coast-style pizza in Denver.

Enjoy classic horror flicks under the moonlight on the patio at Crash 45.  Each film in this series centers around youth, freedom and a deliberate or non-deliberate decision to separate from “normal” society.  Movie-themed drink specials and fun souvenirs to take home!  All films start around 9PM but come early for a seat and/or to order food.

This month’s film is The Brood (1979), about a man who tries to uncover an unconventional psychologist’s therapy techniques on his institutionalized wife, while a series of brutal attacks committed by a brood of mutant children coincides with the husband’s investigation.  (David Cronenberg wrote this film following the tumultuous divorce and child-custody battle he waged against his ex-wife, Margaret Hindson. Cronenberg also said that Samantha Eggar’s character, Nola Carveth, possessed some of the characteristics of his ex-wife.) 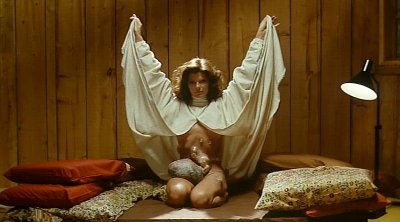 Bring a hott date to The Brood and be sure to get lucky!

Apparently I love posting about events that Andrew Orvedahl is involved in, cuz here’s yet another.  The Greater Than Social Club is my most favorite monthly series.  Combining music and comedy in Lannie’s basement cabaret setting, this event will make you straight-up pumped to be a Denverite.  Tonight’s line-up includes: Troy Walker and the Parlor Pickers, hosted by Andrew O.  Sexy sounds, coupled with LOLs, all for the low low price of 10 dollars.  FREEDOM!!!

Wednesday, July 3, 2013 @ 9ishpm (or whenever the fireworks end): Independence Eve at the McNichols Building

Once the last fireworks turn to ash, continue the celebration of ‘merica at the McNichols Building in Civic Center Park.  Join the Imbide kids on the top floor of this historic building for beer from Breckenridge Brewery, specialty cocktails, DJs from the Beauty Bar, a midnight countdown, and of course, buckets of freedom!  This event is free, however, a $5 suggested donation is being asked to support the Civic Center Conservancy.  (Don’t want to wait in line like a non-freedom havin’ sucker?  RSVP ahead of time with a suggested donation of $10 to beat the crowds and start twerking early.)